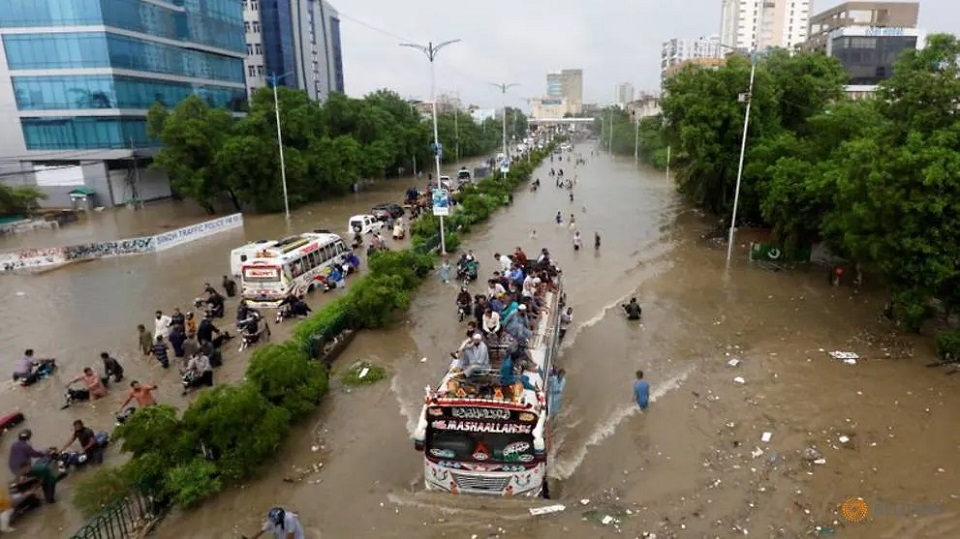 Commuters on motorbikes ride on the sidewalk to avoid flooded road after the monsoon rain with the Dayaram Jethamal Science College, built in the British colonial period, in the background, as the outbreak of the coronavirus disease (COVID-19) continues, in Karachi, Pakistan August 28, 2020. REUTERS/Akhtar Soomro

KARACHI, Pakistan, Aug 29: Pakistan’s flooded financial capital of Karachi was plunged into chaos on Friday with power cuts, streets under water and cellphone outages caused by heavy rain as authorities said at least 23 people had been killed in downpours the previous day.

The provincial government declared a public holiday to avoid residents having to commute on Friday with Chundrigar Road, home to the central bank, stock exchange and head offices of several banks, flooded.

The Chief Minister of Sindh province, Murad Ali Shah, ordered schools be used to accommodate displaced families, whose homes had been damaged or were unreachable.

Among the victims, nine people, including four children, were killed when a wall collapsed on them, a spokesman for Shah said. A 56-year-old disabled woman drowned at home, according to a hospital official.

Cellphone services were disrupted and much of the city was plunged in darkness overnight with the main power utility company K-Electric saying the “unprecedented situation” was hampering efforts to restore electricity.

Oil refinery Pakistan Refinery Ltd said in a notice to the stock exchange that it was suspending operations due to hazards created by floods.

Pakistan’s Meteorological Department recorded 230.5 mm of rain in Karachi on Thursday, the highest ever recorded in a single day. Rainfall in August is the highest since records began 89 years ago.

ISLAMABAD, Nov 2: The release of a Christian woman in Pakistan who was acquitted eight years after being sentenced to... Read More...

Health ministry projects Nepal’s COVID-19 cases to surpass 600,000 with daily cases of more than 11,000 by next three months
4 hours ago

Remittance inflows up 8.6 percent in first eight month of this fiscal year
10 hours ago