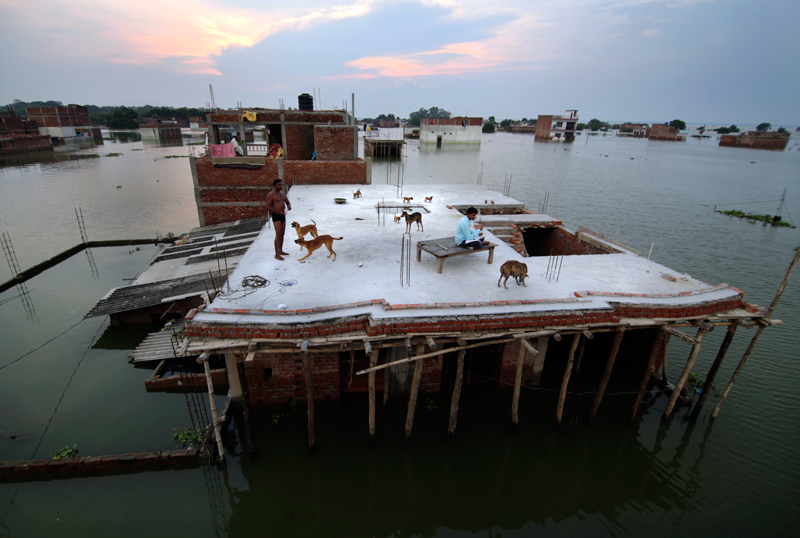 VARANASI, India, Aug 26: Nearly 3,000 people were evacuated in India's remote northeast after an artificial lake created by a landslide threatened their lives, even as flood water levels stabilized in the worst-hit areas of the north, officials said Friday.

Rakesh Ranjan, a National Disaster Response Force official, said the rescue this week was in the mountainous Mangan district of Sikkim state.

But the misery eased somewhat, with rains ebbing over the past three days in Uttar Pradesh state where 200,000 people have moved to relief centers with their village homes submerged, said Deepak Singhal, a top state official.

Air force helicopters dropped food packets to thousands of people in Allahabad district where thousands of people preferred to stay on the top floors of their flooded homes and wait for the water to recede rather than move into state-run relief camps, officials said.

Drowning, electrocution or injuries from collapsed houses have killed at least 175 people, mainly in West Bengal, Assam, Uttar Pradesh and Bihar states during the current monsoon season, which runs from June through September.

The flooding has kept away thousands of pilgrims who generally queue at the ghats, or steps, leading to the Ganges to take their holy dip in the river. The ghats have been submerged by the flood waters.

Usha Devi, a 50-year-old housewife, her husband and three daughters abandoned their flooded home near the river bank in Varanasi in Uttar Pradesh more than a week ago. "We are living in a relief camp and are being fed by the state government," she said.

Singhal said a sudden discharge of water from overflowing dams in neighboring Uttrakhand state and Nepal worsened the flood situation in Uttar Pradesh. "More than 800 villages in nine districts have been flooded by water flowing from Nepal," he said.

KATHMANDU, August 19:India has offered NRs 400 million in cash and kind as relief for the victims of recent floods... Read More...

CHITWAN, August 18: Monsoon floods not only cause trouble to human settlements time and again, they are also  a threat... Read More...