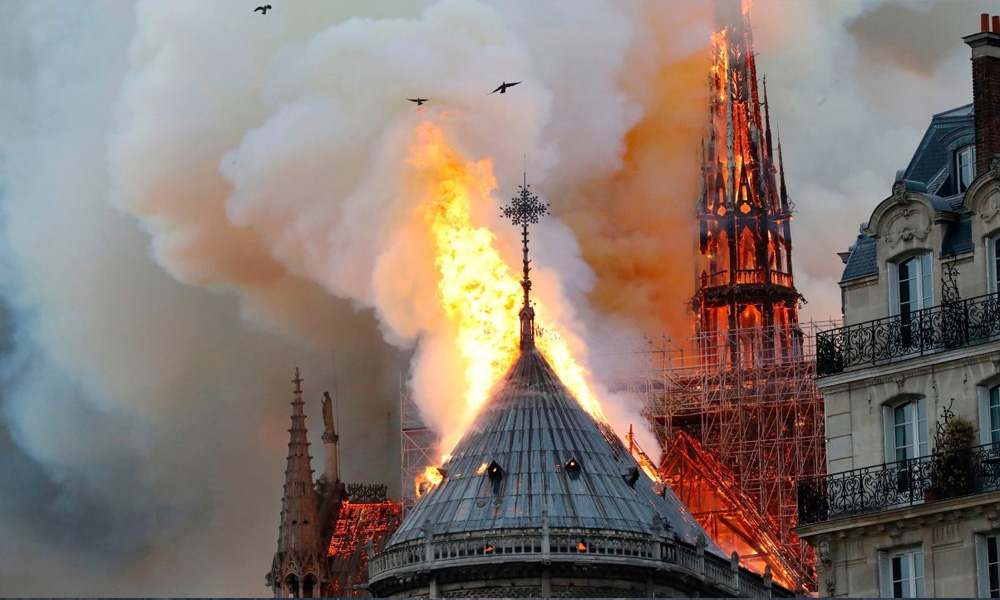 PARIS, April 16: A massive fire consumed Notre-Dame Cathedral on Monday, gutting the roof of the Paris landmark and stunning France and the world, though firefighters saved the main bell towers and outer walls from collapse before bringing the blaze under control.

Flames that began in the early evening burst rapidly through the roof of the eight-centuries-old cathedral and engulfed the spire, which toppled, quickly followed by the entire roof.

The fire, after burning for about 8 hours, was largely extinguished by 0300 CET on Tuesday. Earlier, in addition to battling to prevent one of the main bell towers from collapsing, firefighters tried to rescue religious relics and priceless artwork. One firefighter was seriously injured - the only reported casualty.

“The worst has been avoided,” French President Emmanuel Macron told reporters at the scene shortly before midnight.

Macron said France would launch a campaign to rebuild the cathedral, which is considered to be among the finest examples of French Gothic cathedral architecture, including fundraising efforts and by appealing to “talents” from overseas to contribute.

“We will rebuild it together. It will undoubtedly be part of French destiny and our project for the years to come,” a visibly moved Macron said.

The cathedral’s main stone structure had escaped complete destruction by the time the fire came under control.

“We will continue to watch over any residual pockets of fire and cool down the areas that are still red-hot, like the wooden beam framework,” a fire brigade spokesman said in the early hours of Tuesday.

Distraught Parisians and stunned tourists gazed in disbelief as the inferno raged at the cathedral, which sits on the Ile de la Cite, an island in the River Seine and marks the very center of Paris.

Thousands of onlookers lined bridges over the Seine and along its embankments, held at a distance by a police cordon. Some sang liturgical music in harmonies late into the night as they stood vigil, while others recited prayers.