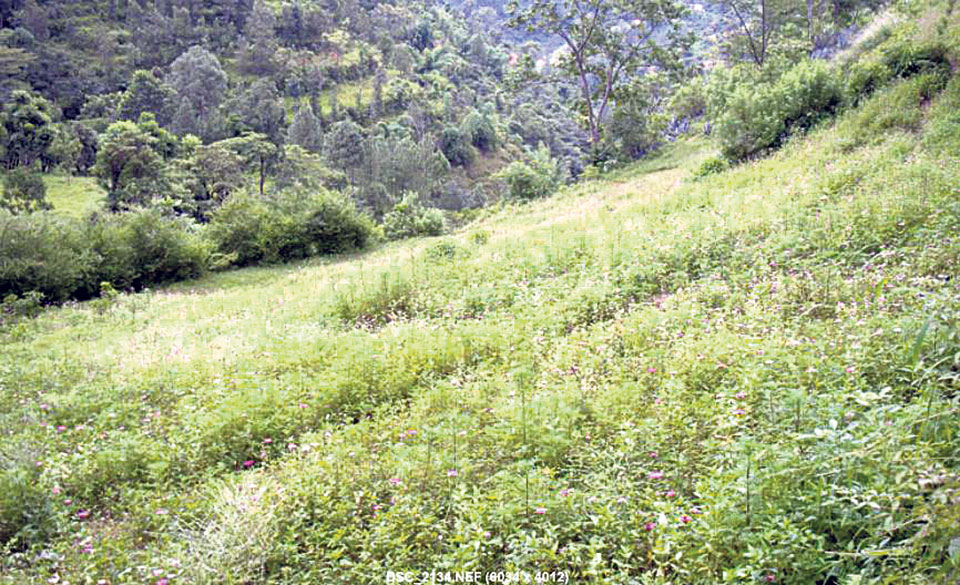 A land in Pyuthan district left uncultivated due to labor crunch. | Photo: Republica

PYUTHAN, Sept 6: Dan Bahadur KC recalls that people working hand-in-hand in fields was a common sight when he was a little boy. It is no longer true anymore. Even fertile lands in the district have been left fallow. His own Naubahini village is no exception to this.

“Young people have left their villages for foreign employment. Only old people, women and children are here,” he noted. “Even if you want to cultivate crops, you cannot do it in lack of manpower. Labor crunch has taken a toll on agriculture,” he added.

Most of the aspirants go to Dubai, Qatar, Malaysia, and other Gulf countries. Some also opt for Japan. India is another alternative for the people. According to KC, no matter where they go for job and money, the effect is seen in the villages. “The villages look empty. Even during an emergency, you can’t find people to help you,” he said.

Labor crunch in the villages of Pyuthan is severe. This has equally affected construction works. Since it is not practical to get workers from outside, the construction plans go in vain, according to KC.

Till a few years back, a laborer would work for Rs 300 per day. But now, in one hand, finding the laborer is challenging and on the other hand, there is no limit to the demand when someone is ready to work. These days, Rs 500 to 600 per day is a very normal rate for a day’s labor.

“Some refuse to work for that amount. In an emergency, there is no other way except to give them whatever they demand,” said KC.

KC has a large field. However, in lack of workers, he has left the field unattended. As the land has not come in use for long, it has lost its fertility. “I used to cultivate paddy, wheat etc in my field. But it has been quite a few years since I have stopped cultivating. And if I try now, it won’t be that rewarding. The land is not as fertile as it used to be,” KC lamented.

Guru Prasad Paudel of Borbot village feels sorry for the same reason. He also could not continue cultivation in his field. There wasn’t enough number of workers around.

“The scarcity of workers became so severe that it was better not to think about agricultural production at all. You have to plea them to come and work, you have to pay them as much as they demand, you have to invest a lot and then there is no guarantee of due return,” he said.

Paudel added that every household is facing the same problem. And this made them lazy as well.

“When we used to grow crops in our fields, our lifestyle was different. Now, most of the people depend on things purchased from the market. Slowly, we have become lazy and we don’t prefer to work anymore,” he said. “Those whose family members are working abroad send money, and others back home simply spend it for some unproductive stuff,” he added.

The lack of use of modern technology in agriculture is also one of the reasons for the fields going fallow, according to Poudel. Had there been better technology, even fewer people could have continued with cultivation. However, there is a dearth of irrigation facility and machines.

“Had there been proper technology, it would have been better. For instance, I could work without the help of laborers. But there is no such technology available here. If I have to bring it to the village just for my own sake, I will have to pay millions for it which I cannot afford,” he lamented.

Poudel, however, reported an interesting fact. While Nepalis are leaving villages for jobs outside the country, Indian boys have made their way to the district in search of work. Of late, Indian nationals are seen busy at construction sites as well as fields.

“It is easier to hire them. But the rate is high,” he said.

Meanwhile, Hukum Bahadur GC of Jhimruk Rural Municipality noted that the craze for foreign employment among youths is still growing and it should be treated as a serious issue by the state. Though they send home money, they leave a huge vacuum in towns and villages resulting in a lasting impact, he noted.

“Both educated and uneducated lots are leaving their country for greener pastures abroad. This has done much more harm than benefitting the country. The government should bring plans and policies to avoid brain drain,” he stressed.

Local bodies in all the nine districts of the province have introduced ‘self-employment program’ to address the problem of brain drain. However, such programs have not made any difference so far.

“We have brought program for youths, but they have not shown much interest. We have allocated a separate budget for self-employment programs, yet have not succeeded in retaining them here,” said chairperson of Jhimruk Rural Municipality, Tilak Jili. Data of the district administration office shows that there has been a constant increase in the number of people obtaining a passport.

In the remote Himalayan districts of Karnali region, policymakers assess that women carry out around 75 percent of the total... Read More...