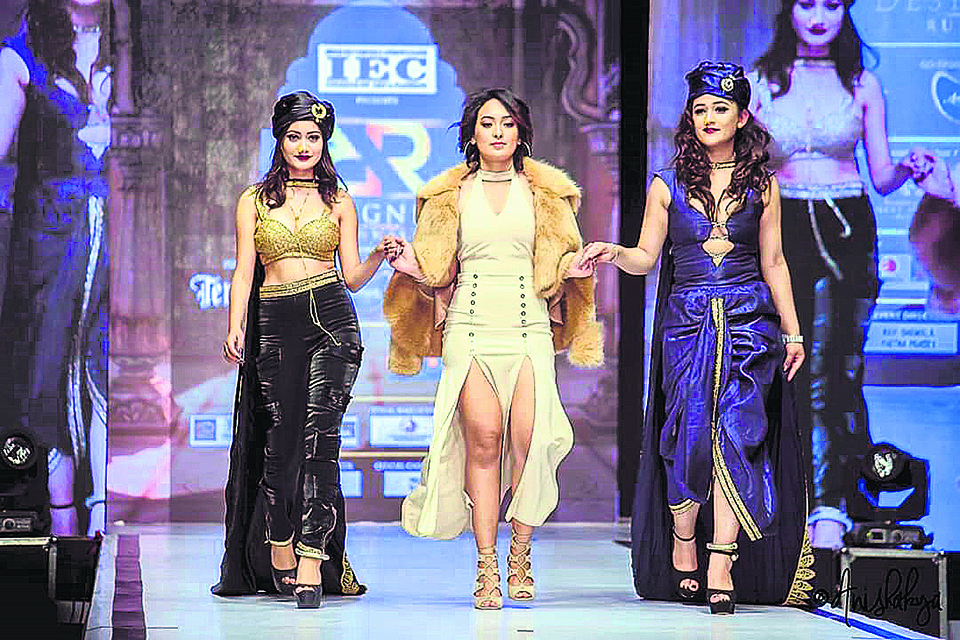 Model Aabha Ghimire is busy calling event organizers and designers. She is due to pay the lease on her apartment and even though she has worked on many photo shoots and has also walked the ramp this past month, she hasn’t been paid what she was promised for her work. This seems to be a common issue in the fashion sector in Nepal. It’s also not unusual for models and other professionals to be expected to work for little to no money for ‘portfolio building’.

“There are a lot of design hubs opening up and more people are becoming interested in working in the fashion sector. On the surface, it looks like the industry is booming. But the sad truth is that, even though the industry is being portrayed as this glamorous world, when it comes to making a living off it it can be pretty hard,” says fashion and wedding photographer Bishwas Pun Magar adding that pay is minimum and often times delayed.

Magar reveals that because he is also a wedding photographer, he earns enough to support himself but had he been focused strictly on fashion, things would have been difficult. He has seen a lot of individuals who only work in the fashion sector having a hard time with their finances. Ghimire adds that timely payment for work is rare.

One of the reasons for this could be the fact that a lot of the time designers and other professionals who organize photo shoots, fashion shows, and similar events work on a number of projects just by collaborating with people. Stylist, makeup artist and fashion designer Sadhana Ranabhat – who has been in these situations a number of times herself – explains that most of the time when you collaborate with other professionals, you are using the project just to develop your portfolio and no one is actually get paid.

Most of the fashion industry professionals this scribe spoke to were of the mindset that the reason why professionals aren’t getting paid on time or at all was also because of meager investments. Ranabhat actually calls this the main reason why many things that are currently happening in the Nepali fashion scene end up looking mediocre at best. There is also an unfortunate trend in creative fields in general, fashion in particular, of demanding maximum output and quality for limited pay.

“For anything to flourish, you have to put enough resources and energy into it. From what I have seen (after working in the fashion industry for a few years), Nepalis are very scared to invest in fashion and see it as a risky business which is affecting the whole industry,” she states adding that most people and companies only follow tried and tested ways that they know for sure will work and reap huge profits.

Agreeing with her, freelance stylist Reejun Pradhan claims that there have been times when she has tried to be a little experimental and unorthodox with her styling but she was asked to scrape the whole look and instead come up with something that is more commercially palatable or, in other words, conventional. Another thing that’s common in the fashion industry is cutting corners on cost that, according to Pradhan, leaves almost no freedom to be creative and come up with out-of-the-box ideas.

Magar has also faced similar problems while working on fashion shoots where he isn’t allowed to change things up a little to get more en vogue and artistic shots. He thinks the reason why professionals aren’t allowed to showcase their own creativity during projects is because those responsible for them don’t trust the models, photographers and others who work behind the scenes, and often have a very constrained and conservative idea and visualization of what fashion is. He states that if the ones in charge of such projects have more faith in the professionals they hire, these projects could have more fruitful results.

An interesting issue Pradhan brings up, which she thinks affects the fashion industry as a whole to a great extent, is that there isn’t really a market for high fashion in Nepal. She states that most Nepalis only approach designers or boutiques when they have to make a new dress for a big event or occasion. “Designers aren’t here to just create expensive lehengas and kurtas. They can make casual and everyday clothing as well. But a lot of Nepalis don’t seem to know about this altogether,” she says adding that this hampers overall business.

According to Ghimire, designers are more at fault for this than the consumers as they are the ones who aren’t promoting the fact that they make casual clothing as well. The fact that you just see bridal and traditional clothing displayed at most boutiques and design hubs in Kupondole that has become the fashion locale of Kathmandu proves Ghimire’s point.

“It all boils down to how much the professionals involved in fashion are willing to invest – in terms of finance and creativity both,” claims Ranabhat adding that professionals need to invest a part of their capital to make a spacious, facilitated and suitable working space for themselves and their companies. She adds that brands should also invest in proper marketing and branding to reach more people. “If all of this were to be done properly, I believe the fashion industry will reach new heights in no time and good, timely pay wouldn’t be an issue anymore,” she concludes.

KATHMANDU, Sept 26: Numerous designers are emerging in the fashion industry of Nepal with growing trend of wearing designer clothes. The... Read More...

KATHMANDU, June 30: After its success in India, PBJ by Pooja Bagaria opened its new branch in Naagpokari, Kathmandu on Monday. Read More...

Once a bustling business hub, Kathmandu’s New Road and Asan area have a few takers today (with photos)
30 minutes ago

Once a bustling business hub, Kathmandu’s New Road and Asan area have a few takers today (with photos)
30 minutes ago