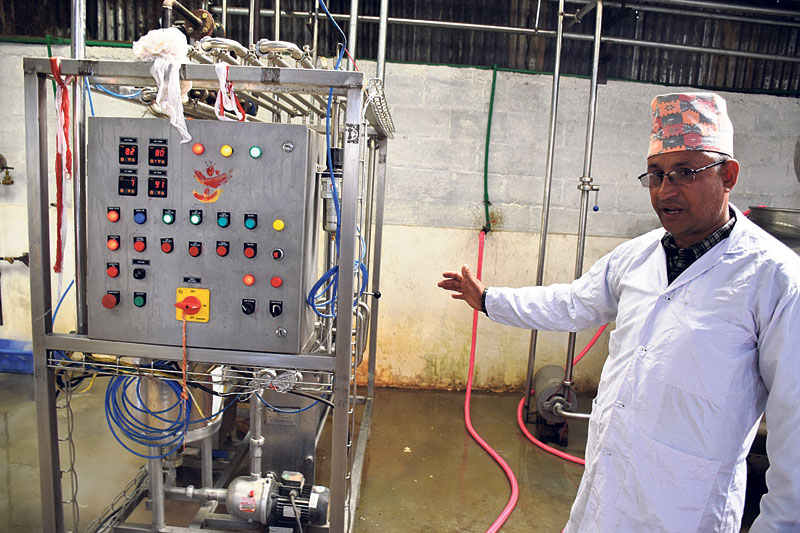 Rabindra Humagain, owner of the Himalayan Milk Cooling Center, Kavre demonstrates machineries at the dairy in this recent picture. (Republica)

BANEPA, Nov 25: Rabindra Humagain, an average farmer from Kushadevi, was never an ambitious man. He was satisfied with a few cattle, selling milk and farming in his small plot of land.

His friend used to collect milk from farmers like him and sell it to the dairy. The friend suddenly decided to quit the job for an unknown reason, leaving Humagain and many others like him in a trouble. Humagain thought a lot about it and finally decided to take the friend’s job.

That was 19 years ago, and he never had to look back again. Now counted as one of the most successful farmers in the country, Humagain operates his own dairy that sells 3500 liters of milk and milk products every day.

“My friend used to run a dairy. He collected milk from many farmers like us and sold it to a dairy. After he decided to quit the job we all landed in trouble,” the 45-year old said. “Then I decided to play his role.”

On the first day, he was able to collect only 17 liters of milk. Other farmers could not trust him. However, with time, he gained their confidence and the business gradually took off.
“In fact, this would not have happened if the cooperatives were not supportive. I did not have enough capital to invest. It was necessary to pay off the farmers for their milk on time. But some cooperatives came to the rescue and I was able keep going,” said Humagain. “Two cooperatives provided me the loan of Rs 700,000. This helped me overcoming the cash crunch and put me in such a position that my business moved ahead smoothly.”

Apart from the farmer’s trust, there were other problems too that he had to overcome. One of them was transportation. He needed to carry milk to Panauti to chill it. “Transportation was the greatest challenge. Porters would carry milk in drums. Taking milk to Panauti from here was very challenging,” he narrated.

Fed up with the hassles, Humagain started to think over it. He felt like turning into an entrepreneur himself. “But that was not easy again. I needed to buy necessary machines and tools to become a real entrepreneur,” he said, adding that his family and friends however encouraged him to get ahead.

He registered his dairy as ‘Himalayan Milk Cooling Center’. That was a decade ago when there was no other dairy in his locality. Recognizing his efforts, the government run Community Cattle Development Project in Kushadevi also helped him to establish the dairy. “After all, the dairy would make it easy for hundreds of farmers. They did not have to worry about selling milk,” said Humagain. “Mine was the first private dairy in this locality.”

So far, his investment has reached Rs 6.5 million. The dairy has directly employed 40 people. It collects, cools and of late, pasteurizes milk and sells the produce not only in Kavre but also Kathmandu valley. “Lately, we’ve also installed insulation system to keep the quality of the milk intact,” he said.

The insulation system keeps the milk and other products fresh. This is installed in a steel tank. In plastic or any other kind of tank, it is not possible to install insulation system, he informed.

The dairy’s products are supplied to dairy product distributors in Koteshwar, Chahabil, Sukedhara, Maharajgunj, Basundhara, Gongabu and Banasthali of Kathmandu. “It’s going on pretty well. We are doing good business both in Kavre and Kathmandu. I’m thinking to further expand it.”

A report by World Health Organization in 2010 rates Kavre as topper in milk product production. As per the report, in 2010 there were 257 cooperatives that focused on milk production in the district resulting in a total production of 72,100 tons of milk that year.

Narayan Prasad Badal, president of Milk Production Cooperative Organization, Kavre, informed that over 200,000 liters of unpasteurized milk is supplied from Kavre to Kathmandu.

“Cattle farming is getting more and more professional in district’s villages. Farmers are doing pretty well,” he said. “If we could invest more in the farming and dairy sector, we could do even better.”