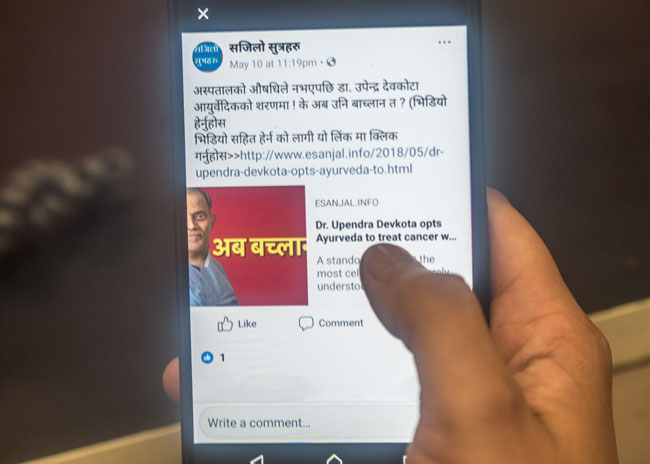 KATHMANDU, June 9: Social media was flooded with false information of Dr. Upendra Devkota, Nepal’s top neuro surgeon's death twice; on December 27, 2017 and today (June 9, 2018). While the news affected his family members, it has also raised some key questions; what actually is false news, and more importantly, how does it spread so quickly? Quicker than the truth itself!

Put it simply, false news are hoaxes that are presented to be real and authentic by quoting news sources, or sometimes, supposedly ‘confidential sources.’  Such information deceives users while directing them to click links of the information source. Apart from generating clicks, which also is called as clickbait, false news are also spread propaganda, satire and parody, mislead readers through wrong headlines, biased stories and reflect sloppy journalism.

Traditionally, readers relied on published media outlets as a major source of news. While Facebook and Twitter have become major sources of information to the media, it also has been detested because of its misleading information.

However, after the arrival of the internet along with learned ability to use it effectively for marketing and profit, things have gone haywire. With this know-how, readers and users of the internet are no longer passive receivers to ‘published media’ content. Instead, they are actively engaged to create contents, boost them, especially to generate clicks and income through Google AdSense account.

But how does it spread so quickly?

One of the reasons why false news travels faster is because it triggers reactive response among users, forcing one to ‘share’ the information on social media. Long before news is termed as false, the damage has been done and the seeds of doubt may have been sown among users.

One of the findings of researchers from a 2018 study by the Massachusetts Institute of Technology (MIT) said that false statements spread faster was because it sounded more surprising and it adhered to their beliefs.

The research is biggest study until now regarding false news and it examined at 126,000 stories on Twitter, tweeted by around 3.5 million users more than 4.5 million times between 2006 and 2017.

Anish Sah, founder at Elance Digital Media Pvt Ltd, a digital marketing company in Kathmandu opines that false news spread like wildfire because it “excited readers and drew them towards websites.”  Sah opined that the seeds of false information going viral stemmed from social media users who are quick to share ‘new information as soon as possible’.

But there is more to it: the MIT research found that false news were 70% more likely to be re-tweeted while it took six times for “true news to reach 1,500 people”. On the contrary, a study by the European Research Council showed that corrective messages often fail to reach the target audience vulnerable to misinformation and fall short of affecting the overall dynamics of rumor spreading.

What can you do about it?

While there are handfuls of fact checking websites, a test by myrepublica.com found that Nepali contents were unavailable for verification. The tested websites include snopes.com, PolitiFact.com, factcheck.org, hoax-slayer.com, truthorfiction.com and urbanlegends.about.com.  Other measures include source verification, flagging and reporting false content on social media.

“A user can take few steps to fend themselves from such malicious contents,” Sah said. The steps include verifying information sources, disabling cache, and cookies.

SURKHET, March 27: Although political parties have yet to formally field their candidates for the May 14 polls, local-level leaders and... Read More...