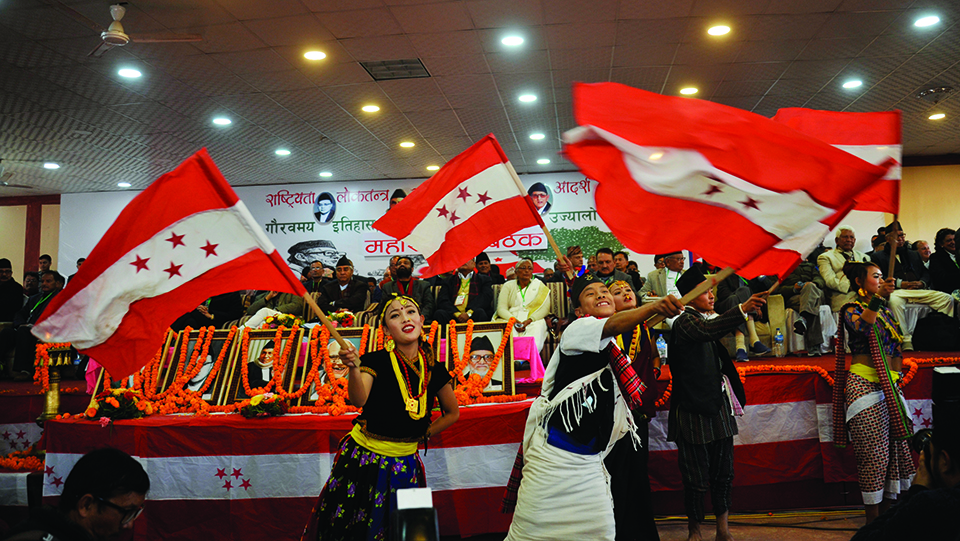 Two rival factions within the party are in a bitter dispute after the establishment faction demanded that office bearers should be picked on basis of the principle of inclusiveness.

KATHMANDU, Dec 21: A fresh dispute has begun in the main opposition Nepali Congress (NC) over the number of party's office bearers and election method. This has led to the extension of the ongoing Mahasamiti meeting till Saturday.

The meeting, which was supposed to deliberate on the party's statute on Thursday, could not do so as there was no agreement between the two sides on the contentious issues of the new statute despite several rounds of negotiations. If the two sides are able to come to an agreement by Friday the Mahasamiti meeting will deliberate on the party statute before it concludes on Saturday.

The disputes emerged as the establishment faction and the rival factions differed again over the number of office bearer positions and whether the office bearers should be elected directly from general convention or nominated by the president.

The two sides within the party are in a bitter dispute after the establishment faction demanded that office bearers should be picked on basis of the principle of inclusiveness.

The two sides had earlier agreed to have a president, two vice presidents, two general secretaries, two joint general secretaries and a treasurer in the office bearers' body and elect them all except for treasurer through the general convention. This would mean significantly curtailing the power of the elected president, as he/she would not have discretionary power to nominate office bearers to secure comfortable majority in the panel.

All seven joint secretaries will be elected directly from general convention based on various seven categories except for backward region as stipulated in the constitution, according to the new proposal of the establishment faction. However, rival faction leaders appear unimpressed by the new proposal, which they suspect is just a ploy by party president Sher Bahadur Deuba to further consolidate his power.

NC Vice President Bimalendra Nidhi said they are still holding negotiations to arrive at a consensus on issues related to the new statute of the party. “We have not reached to any consensus yet. We are trying to settle the issues outside Mahasamiti Meeting,” said Nidhi.

Considering the possible delay, NC has decided to extend further the Mahasamiti meeting till Saturday, which also marks the birth anniversary of the party's late leader Krishna Prasad Bhatttarai. Originally, the meeting was scheduled to conclude Wednesday. The Mahasamiti meeting on Thursday sat only for about an hour and a half as the CWC failed to present the party's new statute for deliberations.

KATHMANDU, Feb 25: The district presidents of Nepali Congress have called for holding a Mahasamiti meeting yet again, complaining that the... Read More...

KATHMANDU, Dec 23: District chiefs of the Nepali Congress (NC) have demanded that central committee members of the party be barred... Read More...

Nepali Congress had a work to do: Do the serious soul-searching over electoral debacle in local, provincial and federal parliament... Read More...

Oli, Nepal at capital’s Marriott Hotel for second round of one-on-one
11 hours ago

Govt’s directive has led to a semi-lockdown situation, lament tourism entrepreneurs
14 hours ago

84% youth suffering from anxiety due to COVID-19: Survey
5 hours ago

Nepal thrash Malaysia by 69 runs, will take on the Netherlands in final
10 hours ago

Oli, Nepal at capital’s Marriott Hotel for second round of one-on-one
11 hours ago