Explainer: Trump's legacy - Big policy changes that often got lost amid the din and scandal 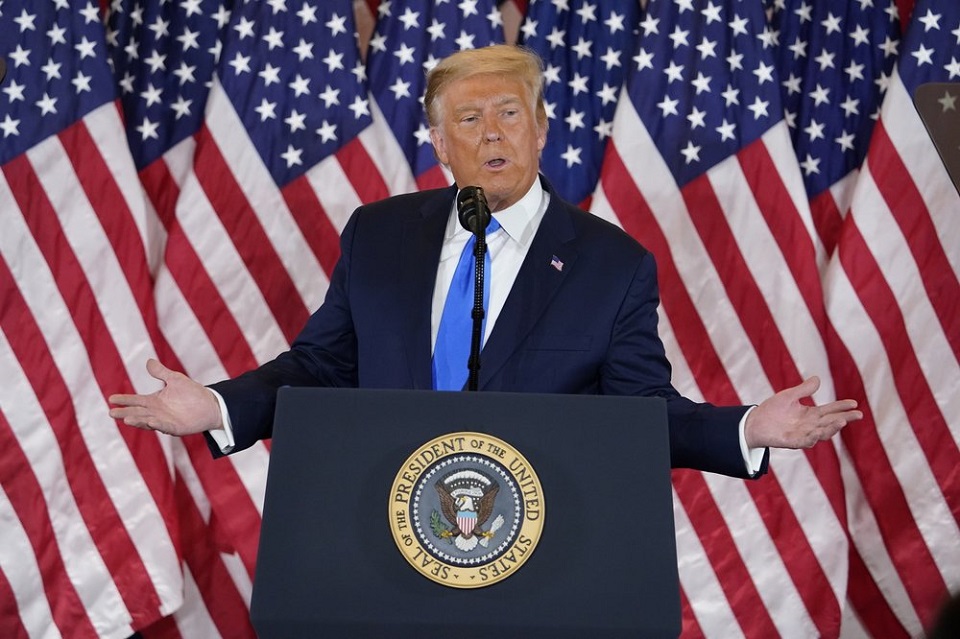 WASHINGTON, Jan 19: President Donald Trump may be best remembered for his use of Twitter as a bully pulpit to stoke controversy or browbeat opponents, but the noise his tweets generated often distracted from the big policy changes he made over his four-year term.

During his rollercoaster presidency, the focus was often on what Trump was saying and not what on he was doing as he careened from one self-induced crisis to another. But a review of his policies shows that he had a real effect on people’s lives in the areas of energy and environment, immigration, the judiciary, business and the economy, trade, and foreign policy, among others.

The Trump administration put China’s rise in the spotlight and helped forge a bipartisan and increasingly adversarial U.S. view of the world’s second-largest economy.

From a raft of tariffs on billions of dollars of Chinese imports to sanctions against top officials and a muscular use of penalties against top Chinese companies like Huawei, ZTE, SMIC and TikTok, Trump hit Beijing on a variety of fronts.

Some allies, however, have raised questions about the effectiveness of these measures and hope that President-elect Joe Biden, who has promised to be just as tough on China, will coordinate better with them to rein in Beijing.

Tensions have risen especially over the past year with Trump repeatedly blaming China for the coronavirus, which originated in the city of Wuhan.

The two global powers are increasingly at odds over a range of other issues, including Hong Kong, Taiwan and the South China Sea.

Biden has been vague about his plans for some of Trump’s signature measures, it will be hard for him to dramatically unwind many of them, given the overwhelmingly bipartisan anti-China sentiment in the U.S. Congress.

Before the coronavirus pandemic hit in March of 2020, unemployment had hit 50-year lows, wages were rising for lower-income jobs, and the gap between Black and white unemployment was narrowing.

The landmark tax bill Trump signed in late 2017 pushed economic growth over 3%, a Trump campaign promise, for a brief period.

Things could have been better, but an 18-month tariff war with China, which cost U.S. companies billions, was a drag on growth and jobs. It ended in early 2020 with a bigger trade deficit with China than when it began.

Three Federal Reserve rate cuts in 2019 helped blunt the impact. Taxpayers shelled out about $50 billion in subsidies to U.S. farmers in 2020 alone to make up for the loss in sales to China.

The pandemic, and the administration’s failure to control it, risks leaving the economy scarred long after Trump leaves office. About 21 million jobs disappeared immediately, and 9 million of those still haven’t come back. Millions more have had hours or pay reduced, or dropped out of the labor force altogether.

Trump routinely dismissed scientific consensus that industry was causing global warming and gutted federal science agencies including the Environmental Protection Agency and the Department of Interior and interfered with their scientific advisory panels. He also boasted about removing the United States from the global Paris Agreement on climate change.

He styled himself as a friend of fossil fuels, courting coal workers and oil executives alike and made good on promises to ease costs for energy companies by rolling back more than 100 climate- and environment-related regulations.

Many of Trump’s deregulation efforts were successfully challenged in court due to bureaucratic errors in rulemaking procedures.

Trump opened up a record number of acres on public lands to drilling and mining, including a last-minute auction for oil development permits in the Arctic National Wildlife Refuge that attracted few bidders.

In his first weeks in office, Biden is expected to begin reversing some of Trump’s most prominent regulatory rollbacks, rejoin the Paris agreement and order every federal cabinet agency to identify who is in charge of combating climate change.

Had Trump won the Nov. 3 election, America’s friends and foes were girding for a second four years, to borrow one of his favorite phrases, the likes of which the world had never seen. His election defeat deprived him of the chance to double down on his “America First” agenda, but the fallout is expected to linger.

His disdain for multilateralism prompted withdrawals from accords and bodies, including the Iran nuclear deal and the World Health Organization. His treatment of U.S. allies has left Biden with shell-shocked friends and the challenge of restoring the United States as a champion of democracy.

Trump partially delivered on a campaign promise to bring troops home from “endless wars,” but scaled-down forces remain in Afghanistan, Iraq and Syria. Despite Trump’s historic engagement with North Korean leader Kim Jong Un, he has made no progress in persuading Kim to give up his nuclear weapons.

Trump’s hard line on Iran has crippled its economy but not forced it back to the negotiating table, and Biden’s aides see the last-minute piling-on of sanctions by the Republican administration as an effort to box him in.

While Trump failed to achieve promised Israeli-Palestinian peace, he brokered deals to normalize relations between Israel and four Arab neighbors.

Trump ended his presidency as he began it - with a laser-like focus on immigration.

“We got it done,” Trump said, standing in front of a section of the 450 miles (724 km) of new and replacement border fence in Texas on one of the last days of his presidency.

The 18-30 foot-high steel fence is the most visible example of Trump’s reshaping of the U.S. immigration system. He set up a multitude of new bureaucratic hurdles for immigrants seeking to enter or stay in the United States. Many of the measures were challenged in court and some were stopped by national injunctions.

Trump imposed a travel ban on a handful of Muslim-majority nations which was later expanded, slashed the U.S. refugee program and forced tens of thousands of asylum seekers to wait in Mexico for U.S. court hearings.

Trump’s 2018 “zero-tolerance” policy to prosecute illegal border crossings led to several thousand children being separated from parents and legal guardians at the U.S.-Mexico border. He later reversed the policy but the parents of some 600 children have still not been located by advocates.

Amid the COVID-19 pandemic, the administration imposed new restrictions that allow border officials to expel almost all migrants caught crossing the border and block the entry of many temporary foreign workers and applicants for green cards.

Biden plans to send a bill to Congress on Wednesday that lays out “a clear roadmap to citizenship” for some 11 million people living in the United States unlawfully. He has also said he will rescind the travel ban, end the program requiring asylum seekers to wait in Mexico and seek to reunite children separated from their parents.

Trump wasn’t happy when judges he appointed ruled against his efforts to overturn the 2020 presidential election results, but his reshaping of the judiciary in a conservative direction is still one of his biggest legacies.

During his four years in office, he appointed three Supreme Court justices, the first time that has been done since President Richard Nixon appointed four in his first term. The court now has a rock-solid 6-3 conservative majority.

Trump appointed 54 judges to the influential appeals courts, just one fewer than his Democratic predecessor Barack Obama managed in eight years and almost a third of the total number.

Trump also named 174 district court judges, the lowest rung on the federal judicial ladder, making up about a quarter of the total number of judges now serving on those courts.

Biden will be able to make inroads on judicial appointments but opportunities are limited because there are few vacancies. He might get the chance to replace liberal Justice Stephen Breyer on the Supreme Court if the 82-year-old chooses to retire.

Trump saved some of his nastiest words for Black athletes kneeling to protest racial injustice, Black and Muslim women politicians who disagreed with him, and non-white immigrants and asylum seekers.

White nationalism, which has festered in the United States since its very start, bloomed under Trump. Propaganda and recruiting for anti-minority organizations jumped and hate crimes climbed. The Capitol riot on Jan. 6 may be just the beginning of more violent threats from white nationalists, terror experts say.

Guidelines calling on colleges and universities to consider race to promote diversity, and encouraging public schools to use zoning and admissions into competitive schools and programs to tackle inequalities, were rolled back in 2018.

A September 2020 Executive Order forbidding federal agencies and government contractors from diversity training that included “divisive concepts” resulted in some stopping any training on gender or race altogether.

A notable exception, 2018’s First Step Act, was the first major criminal justice reform in a decade. It reduced mandatory minimum sentences, and allowed some federal prisoners to finish their sentences early with good behavior.

The toxic relationship between some city police departments and their communities was highlighted by the 2020 death of George Floyd; a divided Congress couldn’t pass a bill in response.

At his administration’s urging, the Republican-led Congress swiftly reversed 16 regulations on fair lending, corporate disclosures, and consumer privacy, among others, and eased banking industry rules introduced following the 2009 financial crisis, in a landmark legislative victory. Most of the action, however, came from Trump’s regulators, which across the government took hundreds of deregulatory measures.

While advocacy groups and progressives slammed Trump’s deregulatory measures for hurting consumers or increasing systemic risks, the changes were rarely as radical as many had initially feared and in some cases even drew backing from Democrats sympathetic to the notion that small businesses would benefit from a lighter touch. Wall Street giants, for their part, won far fewer victories than they would have liked and in some cases found themselves at odds with Trump’s regulators.

Despite the overarching pro-business flavor of Trump’s time in office, his Justice Department led the charge against Big Tech, setting in motion antitrust investigations against Apple, Amazon.com and Facebook, and suing Google for using its online heft to cripple rivals.

Trump’s team also loosened regulations on labor, allowed Corporate America to create more pollution, and was generally more welcoming of mergers and acquisitions. To a certain extent, the regulatory changes can be overturned, some very quickly, by the Biden administration. With Democrats in charge of the Senate and House, some Trump actions will be reversed under the Congressional Review Act, while new staff at regulators can rewrite some, and choose not to enforce others. But big corporate tie-ups, like T-Mobile’s purchase of Sprint, are unlikely to be undone.

Biden’s first 50 days: Where he stands on key promises

WASHINGTON, March 10: President Joe Biden laid out an ambitious agenda for his first 100 days in office, promising swift action on everything... Read More...

World hopes for renewed cooperation with US under Biden

Biden vows action on migrants as he defends border policy

WASHINGTON, March 26: The U.S. will take steps to more quickly move hundreds of migrant children and teens out of cramped... Read More...