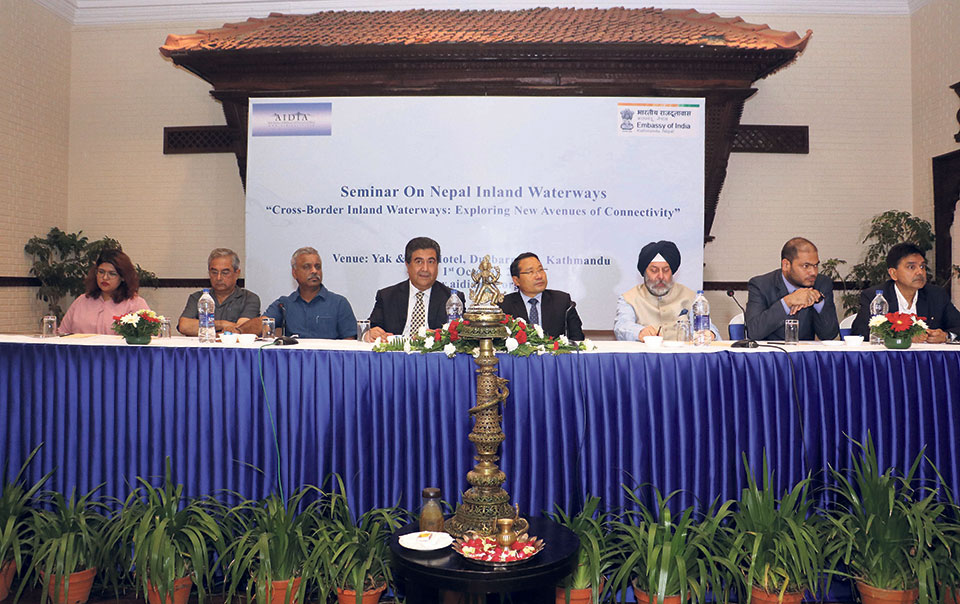 KATHMANDU, Oct 3: Nepali and Indian government officials and experts have emphasized on the need for amendment in the trade and transit protocol between the two countries to accommodate the concept of inland waterways. They have also stressed on the need for establishing a bilateral mechanism to materialize the concept.

The new mode of connectivity can have positive impacts in trade and commerce, bringing win-win results for both the countries, the experts said.

Speaking at a seminar on ‘Nepal Inland Waterways’ in Kathmandu on Monday, Indian Ambassador to Nepal Manjeev Singh Puri said that amendment in the trade and transit protocol between the two countries was needed for opening the prospects of cargo ship moving into Nepal. Puri gave the example of the inland terminal of India’s Varanasi, scheduled to be inaugurated in November this year, while talking about the possibility of inland waterways in Nepal.

Madhav Belbase, joint secretary at the Water and Energy Commission Secretariat, seconded Puri in stating that trade and transit treaty with India was needed to be amended to accommodate inland waterway transportation. He also suggested conducting techno-economical feasibility of inland waterway in Nepal and establishing mechanisms to look after inland navigation, developing infrastructure and legal frameworks, training the people, and working together with industries for the purpose.

Meanwhile, Minister of Energy, Water Resources and Irrigation Barsha Man Pun emphasized on the need to recognize, harness and operationalize water resources for greater good of the people. He said that development of inland waterways will have a tremendous positive impact on Nepal’s trade and commerce.

Dipak Gyawali, former minister for water resources, emphasized on the fact that no country has been developed without water navigation. He said it was unfortunate that most of the Nepal-India water projects were at a dead end, be it the Koshi project, Mahakali project or Pancheshwor project. Instead of only focusing on hydroelectricity, Nepal should consider developing multipurpose projects, he suggested.

The seminar was jointly organized by Asian Institute of Diplomacy and International Affairs (AIDIA) and the Embassy of India.

KATHMANDU, July2: After a decade-long effort, the parliament has finally paved way for establishing and running open university for the... Read More...

KATHMANDU, June 30: After a decade-long effort, the parliament has finally paved way for establishing and running open university for... Read More...