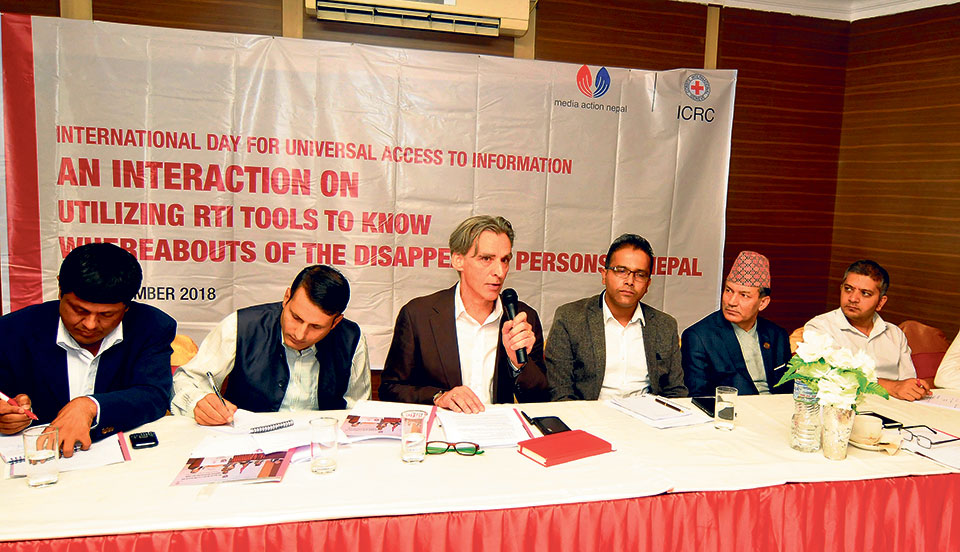 Andre Paquet, head of Mission for the ICRC in Nepal, speaks during an interaction on utilizing RTI (Right to Information) tools to know the whereabouts of the disappeared persons in Nepal organized by action media and ICRC in Kathmandu on Friday. | Photo: Bijaya Rai/Republica

KATHMANDU, Sept 29: Experts, concerned governmental authorities, family members of the people who went missing in the conflict era and journalists held an interaction on Friday on the Right to Information (RTI) tools to learn about the whereabouts of the disappeared persons in Nepal. The interaction was organized by the Media Action Nepal (MAN) and the International Committee of the Red Cross (ICRC) as a celebration of the International day for Universal Access to Information.

Also, various journalists accused the Truth and Reconciliation Commission (TRC) and CIEDP of not being able to find out the truths about the missing persons. They also complained to the chief guest of the interaction, Chief Commissioner of the National Information Commission Krishna Hari Baskota about the undermining of their right to information by various governmental institutions.

Similarly, Editor in Chief of Republica Daily Subhash Ghimire questioned the media friendliness and transparency of the two commissions responsible for investigating into the cases of the victims of the conflict era. “The commissions should focus on making the local stakeholders feel a sense of ownership for the commission,” he said.

Ghimire also emphasized the need for the media to set a proper tone on the issue and write more comprehensive stories on the issue to pressure the commissions to work effectively.

KATHMANDU, August 9: The National Information Commission (NIC) has punished the chiefs of 33 offices for refusing to give information... Read More...

KATHMANDU, July 29: Police have arrested five 'Enough is Enough' campaigners, who were on their way to the Ministry of... Read More...

ITAHARI, Mar 7: The whereabouts of a girl who was abducted four days ago from Harinagara of Sunsari is still unknown. Read More...