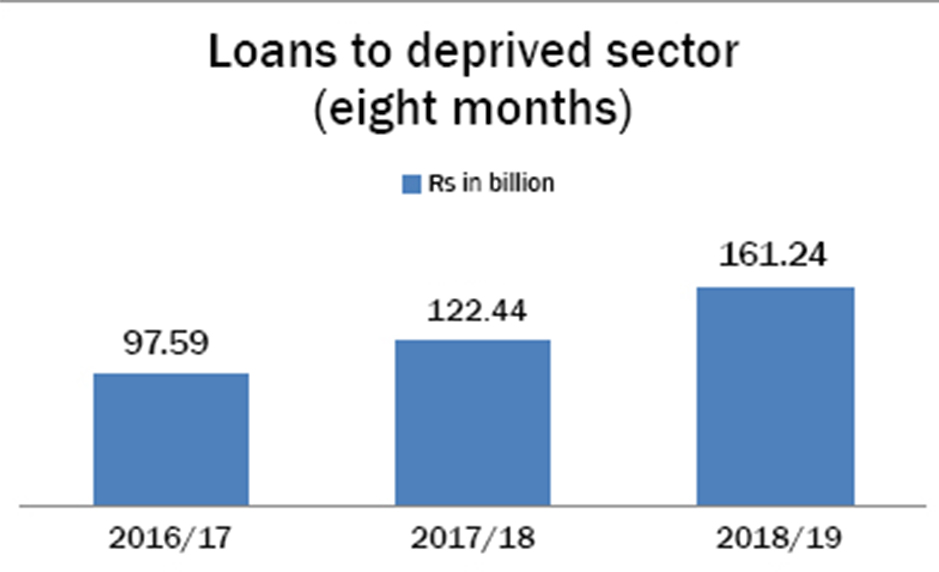 KATHMANDU, May 12: Bank and financial institutions (BFIs) have floated a total of Rs 161.24 billion in loans to deprived sector in the first eight months of the current Fiscal Year 2018/19, a jump by whooping 17.1 percent, or Rs 23.52 billion, largely driven by expansion of the targeted sectors entitled to get concessional financing.

The year-on-year growth of loans under this category that is mandatory for BFIs is very high if compared to 9 percent, Rs 10.98 billion, in the corresponding period of the last Fiscal Year 2017/18. Such outstanding loans as of mid-March in 2018 were Rs 137.72 billion, according to the NRB data.

NRB has defined the deprived sector for the purpose of directed sector lending, and BFIs have to float their loans as prescribed by the central bank in its Unified Directives to licensed institutions.

Low-income families and women, indigenous communities, Dalit, differently-abled people, marginalized communities, small farmers, laborers and landless families, among others, have been put under the deprived sector.

Micro loans from BFIs to these targeted groups to run micro enterprises for their self-employment to uplift their economic and social status of deprived sector can be counted as deprived sector lending.

The growth in directed sector lending is largely attributed to the central bank's decision to revise the definition of deprived sector to include more groups and communities to become eligible for the borrowing.

The central bank's list consists of groups, communities and households that are eligible to get credit that typically ranges from Rs 10,000 to Rs 1 million.

Some of the credits that BFIs float under this category include money to rickshaw drivers to buy rickshaws, financing up to Rs 50,000 per family to purchase shares of hydropower companies allocated for project-hit areas, loans up to Rs 300,000 to low-income families to run micro enterprise or business against group guarantee and up to Rs 200,000 per family to install renewable energy like solar home system, solar cooker, solar pump and bio gas.

Though BFIs were struggling to meet the deprived sector lending requirement until last fiscal year, their credits to these targeted groups rose significantly in the review period.

Banking executives were demanding the withdrawal of such mandatory requirement citing that micro-credit business was not their specialization and that lending was becoming costlier for them.

Many banks were used to paying fines to the central bank rather than meeting the directed sector lending requirement.

In the current fiscal year, banks were allowed to count loans against academic certificates, and higher education loans for students of marginalized and Dalit community, among others, as deprived sector lending.

Apart from the revision in the definition of the deprived sector to include more groups for this loan, bankers say that the expansion of their network has helped them to increase their deprived sector portfolio in the last few months.

KATHMANDU, Aug 14: The Supreme Court has stayed a new rule issued by the Nepal Rastra Bank (NRB) on setting the... Read More...

KATHMANDU, April 11: Nepal Rastra Bank (NRB) has simplified the process of opening bank account as part of its effort to... Read More...

Nepal extends international flights suspension until May 31
6 hours ago