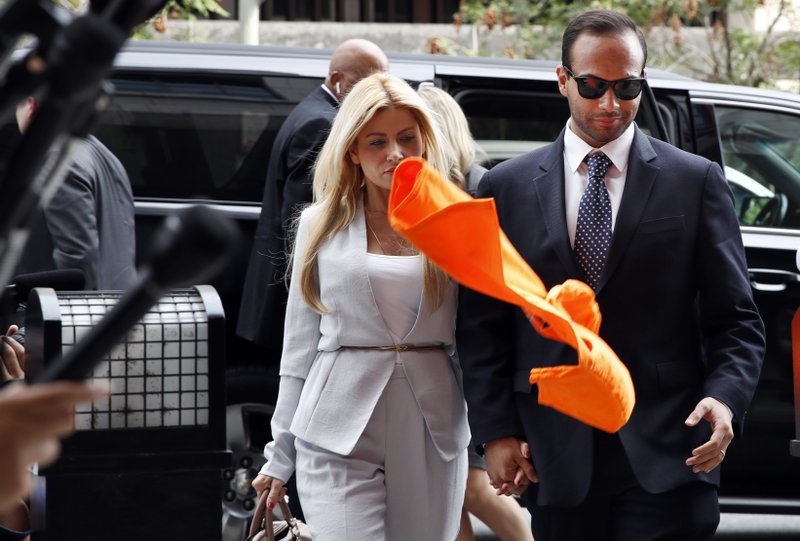 An orange shirt saying “inmate” is thrown by a protester at former Donald Trump presidential campaign foreign policy adviser George Papadopoulos, right, who triggered the Russia investigation, and who pleaded guilty to one count of making false statements to the FBI, as he holds hands with his wife Simona Mangiante on arrival at federal court for sentencing, Friday, Sept. 7, 2018, in Washington. (AP Photo/Jacquelyn Martin)

WASHINGTON, Sept 8: George Papadopoulos, the Trump campaign adviser who triggered the Russia investigation, was sentenced to 14 days in prison Friday after he told a judge he was “deeply embarrassed and ashamed” for lying to the FBI about his contacts with Russian intermediaries.

Papadopoulos, the first campaign aide sentenced in special counsel Robert Mueller’s ongoing investigation, acknowledged that his actions hindered an investigation of national importance, a move that the judge in his case said resulted in the 31-year-old putting his own self-interest above that of his country.

“I made a dreadful mistake, but I am a good man who is eager for redemption,” Papadopoulos said.

The punishment was far less than the maximum six-month sentence sought by the government but more than the probation that Papadopoulos and his lawyers had asked for.

Papadopoulos, who served as a foreign policy adviser to President Donald Trump’s campaign, has been a central figure in the Russia investigation dating back before Mueller’s May 2017 appointment. He was the first to plead guilty in Mueller’s probe and is now the first Trump campaign adviser to be sentenced. His case was also the first to detail a member of the Trump campaign having knowledge of Russian efforts to interfere in the 2016 presidential election while it was ongoing.

U.S. District Judge Randolph Moss said Papadopoulos’ deception was “not a noble lie” and said he had lied because he wanted a job in the Trump administration and didn’t want to jeopardize that possibility by being tied to the Russia investigation.

“In some ways it constitutes a calculated exercise of self-interest over the national interest,” the judge said.

Moss noted that many similar cases resulted in probation but said he imposed a sentence of incarceration partly to send a message to the public that they can’t lie to the FBI.

The sentence drew a quick response from Trump on Twitter, as he scoffed at the two weeks of prison time by comparing it to an unverified cost figure for the Mueller probe.

Memos authored by House Republicans and Democrats , now declassified, show that information about Papadopoulos’ contacts with Russian intermediaries triggered the FBI’s counterintelligence investigation in July 2016 into potential coordination between Russia and the Trump campaign. That probe was later taken over by Mueller.

According to a sweeping indictment handed up this summer, Russian intelligence had stolen emails from Hillary Clinton’s campaign and other Democratic groups by April 2016, the same month Papadopoulos was told by a professor that Russian officials had told him they had “dirt” on Clinton in the form of “thousands of emails.”

Papadopoulos later used his connections with the Maltese professor, Joseph Mifsud, and other Russian nationals in an attempt to broker a meeting between then-candidate Trump and Russian President Vladimir Putin.

He admitted last year to lying to the FBI about those contacts with Russians and Russian intermediaries, false statements that prosecutors say caused irreparable harm to the investigation during its early months.

Prosecutors say those false statements, made during a January 2017 interview with federal investigators, led the FBI to miss an opportunity to interview Mifsud while he was in the United States in early 2017.

“It was at best begrudging efforts to cooperate and we don’t think they were substantial or significant in any regard,” he said.

He said Papadopoulos’ deception required investigators to scour more than 100,000 emails and gigabytes of data to reconstruct the timeline of his contacts with Russians and Russian intermediaries.

Even after his arrest and plea agreement last year, Goldstein said, Papadopoulos continued to be difficult, only providing information after being confronted with documents such as emails and text messages.

In response, defense lawyer Thomas Breen said his client was “remorseful” that his lies impeded the investigation.

Papadopoulos lied because he was torn between wanting to cooperate and wanting to remain loyal to a president whose administration he hoped to join, Breen said. His client was also affected by Trump’s cries of “fake news” and his casting of the Russia investigation as a “witch hunt” just days before his FBI interview.

“The president of the United States hindered this investigation more than George Papadopoulos ever could,” Breen said.

Breen described his client as a “patriot,” who wasn’t trying to help Russia. But he acknowledged that Papadopoulos was unsophisticated, naive and even a “fool” for having made contacts with Russia intermediaries during the campaign.

Breen said his client’s primary interest was brokering a meeting between Trump and Putin, a move he believed the campaign supported. In court papers, Breen wrote that during a March 2016 meeting attended by Papadopoulos, Trump nodded with approval at the idea, and then-Senator Jeff Sessions “appeared to like” it and said the campaign “should look into it.”

That clashes with what Sessions, a key campaign aide and now Trump’s attorney general, told the House Judiciary Committee last November. In that testimony, Sessions said he resisted the idea of any Russia meeting proposed by Papadopoulos.

Outside the courthouse Friday, Breen said Papadopoulos didn’t recall ever telling anyone in the campaign about the fact that Russia had dirt on Clinton in the form of emails.

Breen also rejected the idea that Papadopoulos was the victim of a witch hunt or prosecutorial misconduct.

Asked if Papadopoulos still remained loyal to Trump, Breen smiled wryly and paused for a beat.

“We don’t talk politics,” he said.