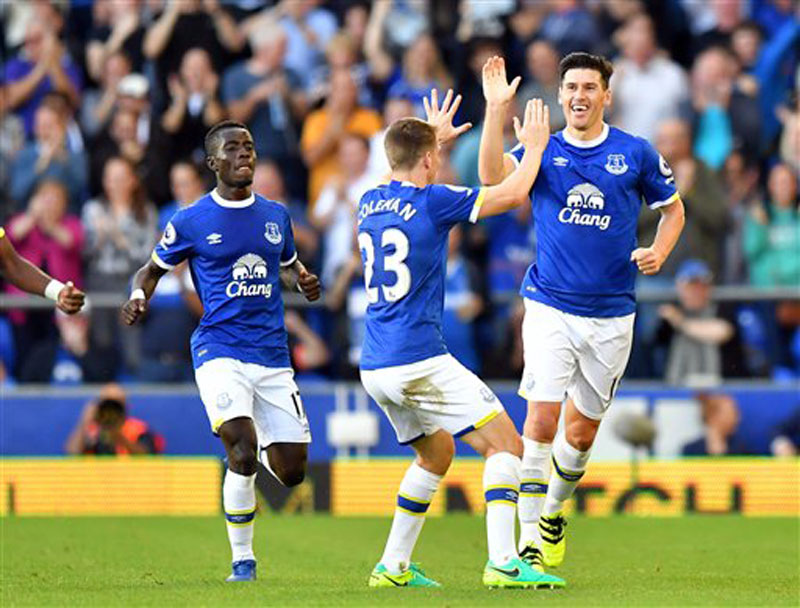 MANCHESTER, Sept 23: With his "headteacher" aura and astute offseason recruitment, Ronald Koeman is making an immediate impact at Everton and getting the best out of the club's strongest squad in a generation.

It might be time for the blue half of Merseyside to start dreaming again, three decades after its trophy-laden heyday.

Koeman, a highly respected former Netherlands and Barcelona defender, was lured from Southampton in June and hasguided Everton to its best five game start to a league campaign in 38 years. With a draw and four consecutive wins, Everton is in second place, behind Manchester City, in the English Premier League standings going into a game at 17th-place Bournemouth on Saturday.

English football is already looking for the next team to "do a Leicester" and rise from nowhere to win the Premier League. Maybe it's Everton's turn, although Koeman has warned against any comparisons with the current champions.

"Normally, we can't win the title. I think what Leicester did last season was an exception," Koeman said. "I am realistic. If I tell you we will fight for the title, I think most people will say, 'That man is crazy.'"

That winning the title is even in the conversation around Goodison Park is testament to work being done by Koeman, who appears to be at a club going places after its disappointing 11th-place finish last season.

Ambition has soared at Everton since Iranian-British businessman Farhad Moshiri became its majority shareholder in February. With greater financial power under Moshiri, Everton spent around $50 million on explosive winger Yannick Bolasie and Wales captain Ashley Williams in August, and almost broke its club record to sign Moussa Sissoko on deadline day before the France midfielder had a late change of heart and joined Tottenham.

To top it all off, Koeman looks to be the real deal after replacing Roberto Martinez, fired in May after running out of ideas and patience among fans after three years in charge.

Standards have suddenly risen at Everton. While the relaxed Martinez used overstatements and cringeworthy hyperbole to laud underperforming players, Koeman has no issue in calling out players whose level drops. Rising star Ross Barkley was substituted at halftime in one match this season, for example.

"Yes, there is a fear, definitely," Everton captain Phil Jagielka said. "It is like being back at school with a new headteacher who is trying to be a little bit stricter."

Gareth Barry, Everton's 35-year-old midfielder, has opened up about the difference between the Martinez and Koeman regimes.

"The standards of the players were, for me, slightly slipping last season, on and off the pitch," Barry said. "It was things like time-keeping, dress codes, training, everything really.

"The confidence and everything had gone."

Everton has beaten West Bromwich Albion, Stoke, Sunderland and Middlesbrough after opening with a draw against Tottenham, and the team looks stronger in every department.

A leaky defense seems tighter with the presence of Williams at center back and energetic midfielder Idrissa Gueye — another summer signing — just in front, while Romelu Lukaku has returned to form with four goals in his last two games and, when at his best, is among the Premier League's most dangerous and prolific strikers.

The heavyweight teams lie in wait for Koeman's side — first-place Manchester City hosts Everton on Oct. 15, the first weekend after the upcoming break for internationals — but suddenly there's a buzz around one of England's most established top-flight clubs.

Before Alex Ferguson arrived at Old Trafford in 1986, Everton had been English champions more often than Manchester United, winning eight titles to United's seven, and was the country's major power alongside Merseyside rival Liverpool.

There's been no silverware since the fifth of Everton's FA Cup titles in 1995, but that may be about to change under Koeman.

Swansea is getting a second opportunity to end Manchester City's perfect start to the season.

City made it nine wins from nine matches in all competitions by beating Swansea 2-1 in theEnglish League Cup on Wednesday, and the teams meet again in Wales on Saturday, this time in the league.

It will only get harder for the Swans: Sergio Aguero is available again after a three-game domestic suspension.

It's time for Vincent Janssen to prove there's life after Harry Kane at Tottenham.

With Kane potentially out for two months with an ankle injury, Janssen should get an extended run with the team for the first time since his offseason move from AZ Alkmaar.

The Netherlands international scored his first goal for Tottenham in the 5-0 win over Gillingham in the League Cup on Wednesday and will lead the line at Middlesbrough on Saturday.

Dr KC to fast again if dean not appointed by seniority

LIVERPOOL, June14 : Everton has confirmed the appointment of Ronald Koeman as their new manager. ... Read More...