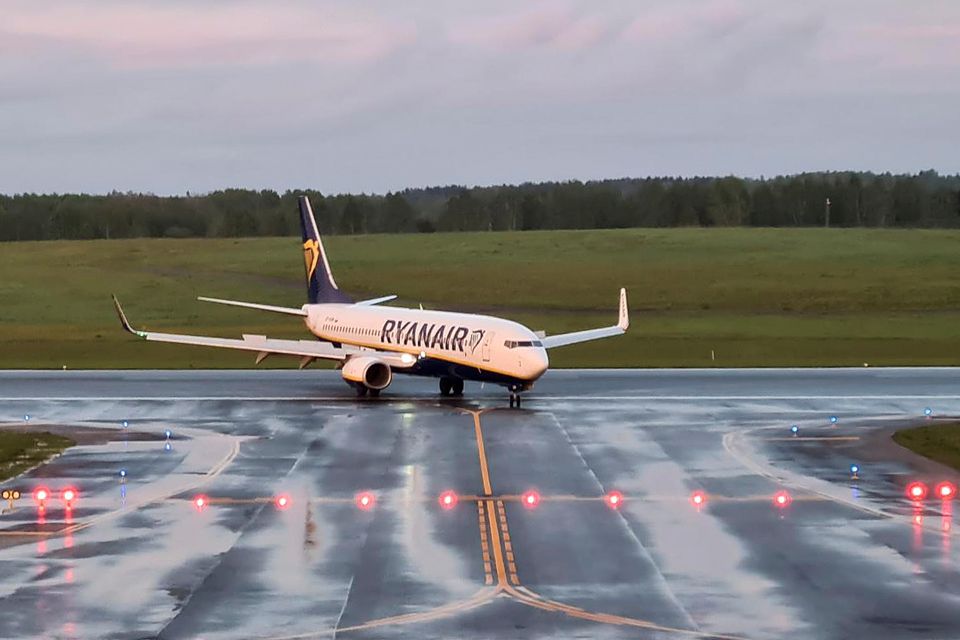 A Ryanair aircraft, which was carrying Belarusian opposition blogger and activist Roman Protasevich and diverted to Belarus, where authorities detained him, lands at Vilnius Airport in Vilnius, Lithuania May 23, 2021. REUTERS/Andrius Sytas

May 24: European leaders threatened to limit international air traffic over Belarus and possibly target its ground transport as well, after a Ryanair plane was forced to land in an incident denounced by Western countries as “state piracy”.

Western leaders reached for the strongest language to condemn Sunday’s incident, in which a Belarusian warplane intercepted a flight between Greece and Lithuania and forced it down in Minsk, where a dissident journalist was arrested.

Countries called for the release of 26-year-old Roman Protasevich, whose social media feed from exile has been one of the last remaining independent outlets for news about the country since a mass crackdown on dissent last year.

"This was effectively aviation piracy, state sponsored," said Ireland's Foreign Minister Simon Coveney, using language that was echoed by a number of other countries. Swedish Foreign Minister Ann Linde said: "It is dangerous, reckless, and naturally the EU is going to act."

The French presidency said a request had been sent to the International Civil Aviation Organization (ICAO) to suspend international overflights over Belarusian air space. Banning the Belarusian state carrier Belavia from European airport was also being discussed, as were ground transport links.

Still, the options for Western retaliation appear limited. The Montreal-based ICAO has no regulatory power, and the EU has no authority over flights taking off and landing in Belarus or flying over its air space, apart from direct flights that originate or land in Europe. Belarus has shrugged off previous rounds of EU and U.S. financial sanctions.

Ahead of a scheduled meeting of the 27 EU national leaders in Brussels, Lithuanian Prime Minister Ingrida Simonyte said she would push with partners to close the airspace of Belarus to international flights. She did not explain how this would be achieved.

Belarus says it was acting in response to a bomb threat on the flight, although this turned out to be false. It said on Monday its ground controllers had given guidance to the flight but had not ordered it to land.

State media said the decision to intervene had been ordered personally by President Alexander Lukashenko.

Russia accused the West of hypocrisy, noting that in 2013 a flight from Moscow carrying Bolivian President Evo Morales had been diverted to Austria after reports fugitive U.S. intelligence leaker Edward Snowden might be on board.

The EU and the United States already imposed several rounds of financial sanctions against Minsk last year, which had no effect on the behaviour of long-serving leader Lukashenko, a close Russian ally who withstood mass demonstrations against his rule after a disputed election.

The head of the foreign affairs committee in the British parliament, Tom Tugendhat, noting that the flight was between two members of both EU and the NATO military alliance, said: "If it's not an act of war, it's certainly a warlike act."

Belarus lies on the flight path of some important north-south routes in Europe as well as east-west routes between Europe and Asia.

ICAO, a U.N. body, said the incident may have contravened the core treaty that governs global aviation.

"ICAO is strongly concerned by the apparent forced landing of a Ryanair flight and its passengers, which could be in contravention of the Chicago Convention," it said. "We look forward to more information being officially confirmed by the countries and operators concerned."

A Latvian airline, airBaltic, became the first on Monday to announce it would no longer fly over Belarusian air space. However, it was not clear that other airlines would do so unless required. KLM of the Netherlands said it had carried out a risk assessment and was making no changes for now.

Ryanair (RYA.I) boss Michael O'Leary, who referred to the incident as a state-sponsored hijacking, said he believed security agents had been on the flight and had disembarked in Minsk. That would mean the operation had effectively been coordinated with spies operating on the ground in Greece.

"The EU will consider the consequences of this action, including taking measures against those responsible," EU foreign policy chief Josep Borrell said in a statement on Monday. European Commission chief Ursula von der Leyen said "the outrageous and illegal behaviour of the regime in Belarus will have consequences".

Minsk has shrugged off previous sanctions since last year, which consist mainly of adding various officials to black lists which restrict their right to travel or do business in Europe and the United States. The EU was already working on a fourth round before the Ryanair incident.

Additional steps could now include suspending overflights of EU airlines over Belarus or banning the Belarusian airline Belavia from landing at EU airports. An EU official said suspending ground transit could also be discussed.

Protasevich's whereabouts were not made public. A university in Vilnius said one of its students, Sofia Sapega, 23, was travelling with him and had also been detained. read more

After Protasevich was arrested, flight 4978 was allowed to travel on to Vilnius, where weary passengers disembarked. One, who gave his name as Mantas, described the moment when the pilot had come on the intercom to tell passengers they were being diverted to Minsk, with no explanation. Protasevich immediately shot to his feet, knowing his time was up. read more

"Roman stood up, opened the luggage compartment, took luggage and was trying to split things," giving a laptop and phone to his female companion, Mantas told Reuters. Once the plane landed, police took Protasevich away.

"We saw from the window that Roman is standing alone, and one policeman with dog was trying to find something" in his luggage, Mantas said.

"I looked directly into his eyes and he was very sad."