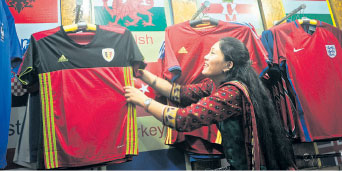 KATHAMNDU, June 17: One of the football crazy nations, Nepal celebrates every big football event in full swing be it World Cup or any regional tournaments.

Though the way of celebrations varies from people to people, analyzing the current trend, one can witness fashion of buying favourite team’s jersey.

The fashion of buying kits is not limited to the capital city but across the whole country. In recent years, buying jersey of favourite teams has been one of the popular trends. The trend is gradually turning into habit in one after another tournament. Euro Championship 2016 featuring 24 teams of Europe has already kicked off.

“I have been supporting England ever since I began watching football on television,” said 22-year old Ramesh Adhikari of Baneshwar after buying an England jersey. “Wearing jersey during tournaments like Euro and World Cup gives feeling of true supporter and it is also a kind of fashion.”

Sports gear producers and suppliers are making good fortune during football festivals. As the fever of Euro Cup being held in France is gradually moving to its peak in Nepal, sales of jerseys of participating teams have gone high.

“Jersey sales have increased since the Euro Cup started. Jerseys of popular footballing nations like England, Germany, Portugal, France and Belgium are being sold in high quantity,” said Janak Neupane, the owner of RJ Sports at China Town in Sundhara. Neupane’s store sells jerseys of various international teams, and also produces jersey for Nepali national cricket and others.

When it comes to buying of football kits age does not matter as children to youths have been buying jerseys of their favorite teams.

“Mostly teenagers and youths come to buy jerseys. However, children are also visiting the store for the same purpose. Even people of a same family buy jerseys of different nations,” said Jinlab Lama, sales in-charge at Bhadrakali Sports and General Suppliers that supplies kits throughout the country.

Social media has been playing a major role in increasing sales of jersey as social media users share photos of them wearing jerseys of their favourite teams. Such trend has been attracting more and more people in buying their favorite team’s jersey and sharing the excitement with social media contacts.

“People post their photos adorning jerseys of their favorite team. These pictures attract others on their friends or follower list and the trend goes on,” explained Neupane.

Although the volume of jersey sales is higher than the previous editions of the Euro, it is still very less compared to the World Cup, where teams from all continents take part.

“Sales are high compared to last edition of the Euro. However, the event does not have charm like the one that we see during the World Cup,” said Ravin Shakya of Elite Sports, Dhumbarahi. Shakya shared that this year there has been noticeable increase in the number of Russian fans buying jerseys of the team. He says that this is a unique rarely seen in the past years. Along with that jerseys of teams taking part in Copa America are also being sold, he added.

“Sometime parents come to buy jerseys for their children, however in few cases children compel their parents to buy the kit for them,” Bijay Shrestha of Sindhu Sports Centre,

KATHMANDU, June 10 : Marking the occasion, shops, malls, and offices in Kathmandu are getting heavily influenced by the football... Read More...

Futsal: A Growing Craze in Kathmandu

KATHMANDU, Oct 23: Nepalis have always been avid fans of football and the fandom can be visible with jam-packed stadiums during... Read More...

After bidding farewell to the exuberance of Gaijatra, Kathmandu Valley witnessed another lively crowd on the occasion of Ropain Jatra... Read More...