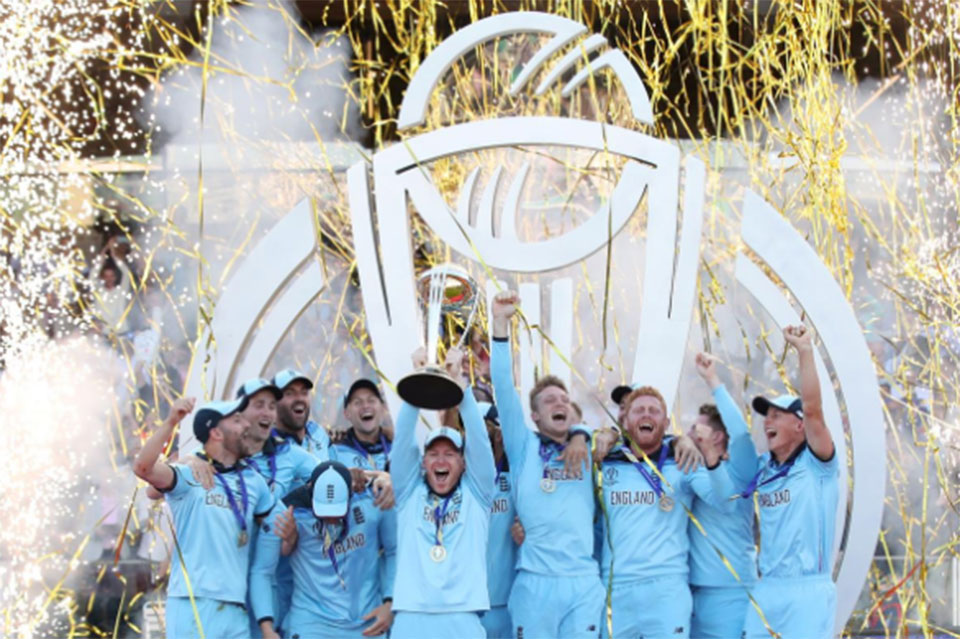 LONDON, July 15: England ended their 44-year wait for a maiden 50-overs World Cup title by beating a gutsy New Zealand side on boundaries after a tied Super Over amidst heart-stopping drama on Sunday.

Chasing 242 for victory, Ben Stokes’ scintillating 84 not out helped the hosts tie the see-saw contest, forcing the Super Over where more nail-biting excitement unfolded.

Jos Buttler and Stokes took 15 runs off Trent Boult’s Super Over without losing their wickets.

“We find it hard to play on wickets like that and today was about getting over the line. Sport is tough at times,” England captain Eoin Morgan said after the draining contest.

“I was being cooled down by Liam Plunkett, which is not a good sign. I was up and down like a yo-yo.”

“This has been a four-year journey, we have developed a lot... We are delighted that we are lifting the trophy.”

After six weeks of cricket, it all boiled down to a boundary count in the final and England were comfortable 26-17 winners.

Since being unceremoniously dumped out of the 2015 edition of the marquee tournament in Australia, Morgan’s England side have reinvented themselves as a white-ball juggernaut, heading into this World Cup as overwhelming favourites.

Back-to-back defeats by Sri Lanka and Australia in the group stage helped England rediscover the attacking brand of fearless cricket which has been the hallmark of the current team.

They dismantled India and New Zealand to storm into the semi-finals, where they crushed Australia with another ruthless display of all-round excellence.

Sunday’s final, England’s first since 1992, pitted them against a New Zealand team chasing their own slice of history after spending decades as the tournament’s bridesmaids.

Henry Nicholls made 55 and Tom Latham chipped in with 47 but lack of significant partnerships hurt New Zealand, who eventually had to settle for a below-par total.

Nicholls and captain Kane Williamson put on 74 runs to bolster the New Zealand innings but Plunkett’s two-wicket, cross-seam masterclass took the wind out of their sails.

Plunkett dismissed both batsmen just when the partnership was looking dangerous and he eventually finished with 3-42.

Woakes claimed three as well, including the wicket of Latham just when the batsman was looking poised to provide the late charge that could have taken New Zealand past the 250-mark.

New Zealand’s new ball pair of Trent Boult and Matt Henry returned determined not to let it become a cakewalk for the hosts.

Henry dismissed the in-form Jason Roy for 10 and Colin de Grandhomme put a struggling Joe Root (7) out of his misery.

England could have been in a bigger hole had de Grandhomme not dropped a waist-high return catch from Bairstow, then on 18.

England were gasping on 86-4 when Stokes was joined by Buttler for a 110-run stand to revive the chase and tie the scores, producing one of the most thrilling finishes in the history of the game.

STROKE OF FORTUNE
Needing 15 runs off the final and 50th over of their innings, a stroke of fortune helped Stokes level the scores.

With tailender Adil Rashid at the other end, the all-rounder twice refused to take singles and hit the third ball from Boult over mid-wicket for a six.

The next delivery also yielded six runs albeit in an extraordinary manner.

Stokes hit to deep midwicket and dived forward to complete the second run. As Martin Guptill fired in his throw, the ball was deflected off Stokes’ outstretched bat and ran to the boundary for another four runs.

“That was a bit of a shame wasn’t it?” Williamson said. “That’s the game we play. You can’t nitpick, it just wasn’t meant to be.”

It was a second successive defeat in the final for New Zealand and Williamson found little solace in his player-of-the-tournament award.

“We have showed heart and fight to get to this stage and a tie in the final - it wasn’t meant to be,” he said. “The guys are shattered. It’s devastating. Tough to swallow.”

Stokes’ batting heroics earned him the player-of-the-match honour and the all-rounder said the sport may never again see anything to match the frantic finish to the contest.

“I’m pretty lost for words,” he said. “All the hard work that’s gone in over these four years, this is where we aspired to be. To do it with such a game, I don’t think there will be another like this in the history of cricket.”

KATHMANDU, Oct 25: The Trophy of the ICC Cricket World Cup to be held next year in England and Wales... Read More...