England win toss and opt to bowl in 3rd T20 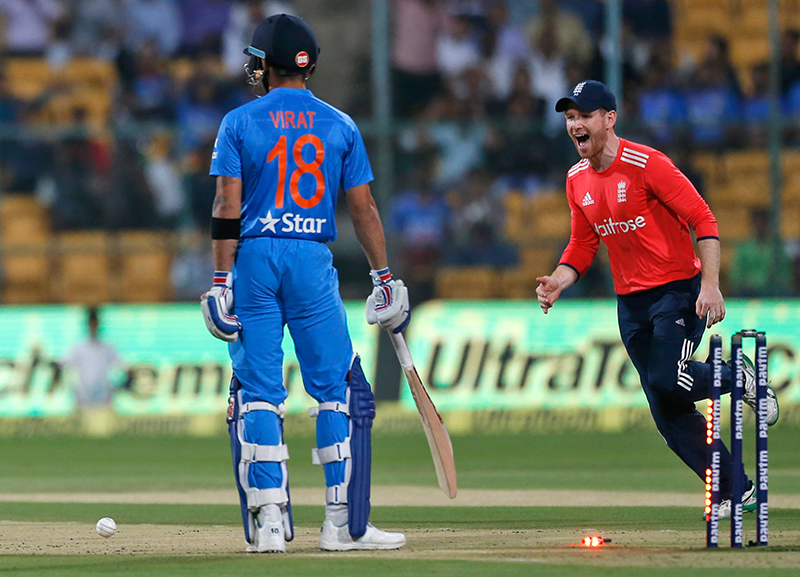 BANGALORE, India, Feb 1:  England won the toss and opted to bowl in the third and final Twenty20 against India in Bangalore.

This was a third-successive win of the coin toss for visiting skipper Eoin Morgan in this short series, and he followed the script from first two matches by asking the home team to bat first again.

The series is pegged at 1-1. England won the first T20 in Kanpur by seven wickets. India won the second T20 in Nagpur by five runs.

The hosts made one change from the last game. Hard-hitting youngster Rishabh Pant makes his international debut, replacing Manish Pandey, who was India's second-highest run scorer in Nagpur.

The visitors made one change. Liam Plunkett comes back into the side after missing out in Nagpur.

The pitch at the Chinnaswamy Stadium looked dry. There is no danger of dew affecting the game thanks to the sub-surface aeration system, which is part of the newly installed state-of-the-art drainage system.

LONDON, July 27: England won the toss and chose to bat first in the third test against South Africa at... Read More...

Photos: Pinnacle installed at top of Bal Gopaleshwar Temple at Ranipokhari
34 minutes ago
Four killed, 10 hospitalized in forest fires in eastern Ukraine
1 hour ago
Former finance minister Khatiwada appointed as Nepal’s envoy to the US
2 hours ago