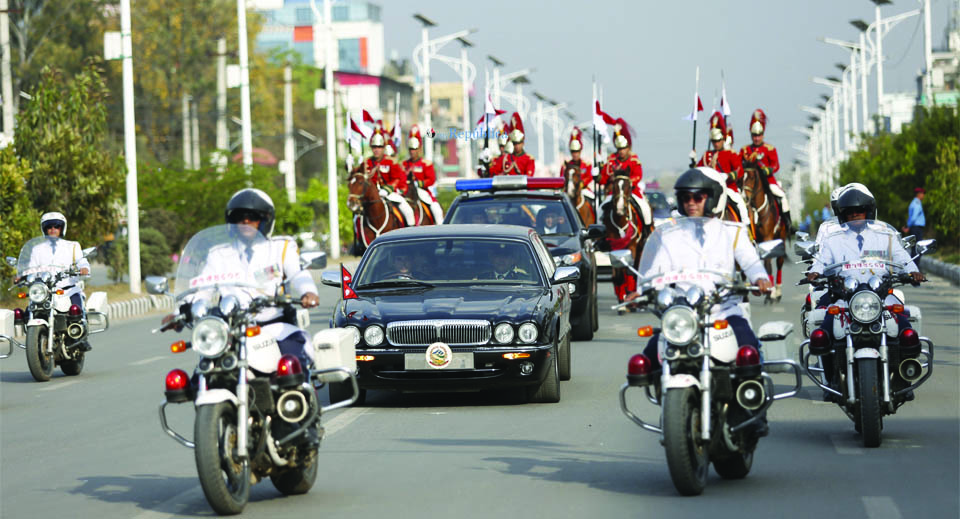 Nepali people have been expressing anger against the so-called VIP culture because people are often made to wait for hours during the motorcade of the president and other VIPs. This VIP culture has made people question if there is any difference between republican democracy and monarchical rule.

There is growing hatred against VIPs in Nepal. While a common citizen is faced with a general atmosphere of insecurity, the increased expenditure on VIPs from the public exchequer to fund their security and pompous travel expenses is palpably unjust. It is worse when the common citizens are compelled to adjust their travel schedules around often unannounced mobility of VIPs.

Nepal needs to do away with VIP culture. If at all, blocking of traffic to make way for VIP vehicles should be limited to only certain occasions and reserved for the topmost constitutional posts. Besides, state-funded excessive security needs to be done away with. This is because it is not right to provide special treatment to handful of powerful people while majority of the people are saddled with poverty, lack and misery. Besides, VIP culture is fundamentally undemocratic, deeply demeaning to the people and is against the principle of equality.

VIP travels drain substantial amount of money of the taxpayers and public resources. But the problem is that general tax payers are powerless to change this situation for they are often unheard by politicians and influential people.

According to social conflict theory by Karl Marx, common people, especially the marginalized, lack basic amenities, while powerful people are bent on securing their power and status. Conflict theorists describe this relationship between the “common” people and VIP(s) as that between owner and tenant primarily constructed on conflict rather than harmony. Even though the relationship may appear to be harmonious, it is merely because of the law and other elements, which themselves are a product of conflict.

In Nepal, having a beacon light on vehicles symbolizes a social prestige and it’s hard to imagine a VIP convoy without these lights. However, very recently India has banned the use of red beacon lights as a step to end the VIP culture.  The culture of having beacon lights on VIP vehicles is one laced with class consciousness which reinforces pauperism.

It acts as a bridge to the culture of arrogance and privilege providing for a sense of entitlement, which must be done away with.  But the more relevant question to ask is whether removing red beacon lights would end VIP culture, for there is no point in not having the red lights when VIPs live with the same degree of arrogance and dominance.

Providing high level security to the president and prime minister is valid but in Nepal even former prime ministers and other ministers tend to claim VIP’s entitlements. Ex-ministers still use government vehicles and keep servants even after their retirement at the expense of tax payer’s money. Most personnel working for VIPs are often exploited as domestic workers. The Ministry of Home Affairs has reduced the number of personnel for the security of retired officers. This is the step in the right direction. It should be applied in case of former ministers as well.

Of course, Prime Minister and President are security-sensitive positions and they need proper security arrangement during their travel but in Nepal even those who do not need heavy security are enjoying the privileges. VIP security is considered as a status symbol.

Those enjoying such privileges won’t be willing to give them up, which is why greater public pressure is required to force them to live like common men. As citizens we must strive to change the system and live up to the spirit of equality and social justice. In a democracy, everyone is equal.

The author is a BALLB student at Nalsar
University of Law, Hyderabad

Her face was dipped into boiling fish curry simply because she was not cooking fast enough.  And then the perpetrator,... Read More...