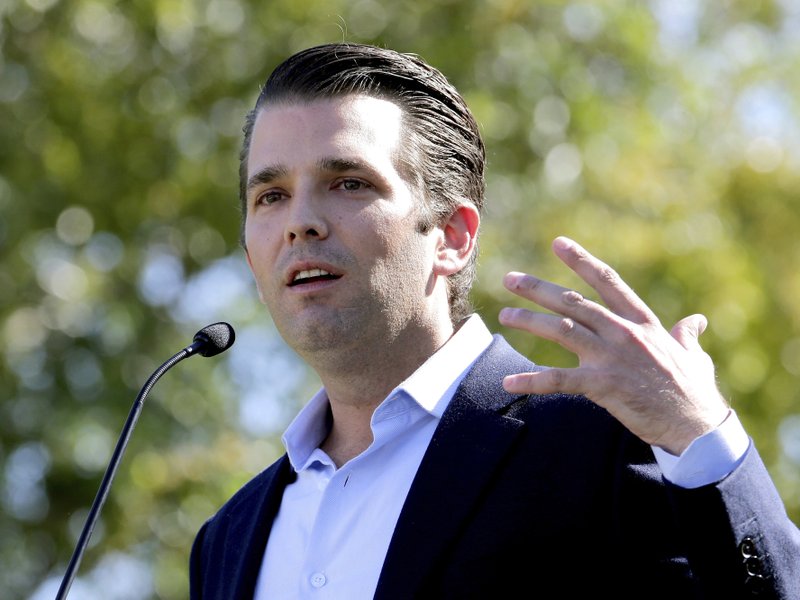 WASHINGTON, July 12: Donald Trump's eldest son revealed Tuesday that he was eager to hear damaging information about Hillary Clinton from the Russian government, disclosing a series of emails that marked the clearest sign to date that Trump's campaign was willing to consider election help from a longtime U.S. adversary.

The email exchange posted to Twitter by Donald Trump Jr. showed him conversing with a music publicist who wanted him to meet with a "Russian government attorney" who supposedly had dirt on Clinton as "part of Russia and its government's support for Mr. Trump." The messages reveal that Trump Jr. was told the Russian government had information that could "incriminate" Clinton and her dealings with Russia.

"I love it," Trump Jr. said in one email response.

As the emails reverberated across the political world, Trump Jr. defended his actions in an interview with Fox News, blaming the decision to take the meeting on the "million miles per hour" pace of a presidential campaign and his suspicion that the lawyer might have information about "underreported" scandals involving Clinton. Trump Jr. said the meeting "really went nowhere" and that he never told his father about it because there was "nothing to tell."

"In retrospect I probably would have done things a little differently," Trump Jr. said.

Democrats in Congress voiced outrage and insisted the messages showed clear collusion, with California Rep. Adam Schiff, the top Democrat on the House intelligence committee, declaring that "all of the campaign's previous denials obviously now have to be viewed in a different context."

Yet Republicans — who stand the most to lose politically from Trump's Russia ordeal — did not join in the condemnation. Senate Majority Leader Mitch McConnell said he was confident Senate investigators would "get to the bottom of whatever happened." And Sen. Susan Collins, a Maine Republican on the intelligence committee, cautioned that the emails were "only part of the picture."

Trump Jr., who was deeply involved in his father's presidential campaign, portrayed his decision to release the emails as an effort "to be totally transparent." In fact, they had already been obtained by The New York Times.

Hours after the son posted the emails, the father rose to his defense.

"My son is a high quality person and I applaud his transparency," the president said in a statement read to reporters by White House spokeswoman Sarah Huckabee Sanders. Although Sanders declined to answer questions about the emails, she stood by the White House's longstanding insistence that no one in Trump's campaign colluded to influence the election.

The messages were the latest disclosure to roil the ongoing investigation into Russia's interference in the election and potential collusion with Trump's campaign. U.S. intelligence agencies have said the Russian government meddled in the election through hacking to aid Trump.

As congressional committees and Special Counsel Robert Mueller investigate, the emails will almost certainly be reviewed for any signs of coordination with the Kremlin, which the White House and Trump Jr. have repeatedly said did not take place. A spokesman for Mueller, the former FBI director, declined to comment, citing the ongoing investigation.

In the emails — dated early June 2016, soon after Trump secured the GOP nomination — music publicist Rob Goldstone wrote to Trump Jr. to connect him to Russian attorney Natalia Veselnitskaya. Goldstone wrote that the information "would be very useful to your father."

"If it's what you say I love it especially later in the summer," Trump Jr. replied in one of the emails. Days later, Veselnitskaya met with Trump Jr. on June 9 at Trump Tower in New York. Veselnitskaya has denied ever working for the Russian government.

The emails show Goldstone telling Trump that singer Emin Agalarov and his father, Moscow-based developer Aras Agalarov, had "helped along" the Russian government's support for Trump. The elder Agalarov was involved with Trump in hosting the 2013 Miss Universe pageant in Moscow. The two men once also had preliminary discussions about building a Trump Tower in Moscow, but they fell through. Trump also appeared in a music video with the younger Agalarov.

In his email, Goldstone said that the "Crown prosecutor of Russia" offered to provide the information on Clinton to the Trump campaign in a meeting with Aras Agalarov. There is no such royal title in the Russian Federation, but Goldstone — who is British — may have been referring to the title given to state prosecutors in the United Kingdom.

In Russia, the top justice official is Prosecutor General Yury Chaika, the equivalent of the attorney general in the United States. Chaika is longtime confidant of Russian President Vladimir Putin and was directly appointed by him.

Representatives for the Agalarovs didn't respond to requests for comment on Tuesday. Attempts to reach Chaika at his office were unsuccessful.

In one email, Goldstone said he could send the information about Clinton to Trump's father first directly "via Rhona" — an apparent reference to Rhona Graff, the elder Trump's longtime assistant from his days at the helm of the Trump Organization.

Though the emails weren't posted in full until Tuesday, word of their existence had emerged on Monday. In an interview with The Associated Press on Monday, Goldstone described the information as purported evidence of illegal campaign contributions to the Democratic National Committee. It's unclear what proof, if any, Veselnitskaya provided during the meeting.

Trump Jr.'s account of the meeting, its nature and purpose has evolved over the past several days, giving further fuel to critics who say the president and those around him have not been forthcoming as the Russia saga has unfolded.

On Saturday, in his initial description of the encounter, Trump Jr. said it was a "short introductory meeting" focused on the disbanded program that had allowed American adoptions of Russian children. Moscow ended the adoptions in response to Magnitsky Act sanctions created in response to alleged human rights violations in Russia.

A day later, Trump Jr. changed his account, acknowledging that he was told beforehand that Veselnitskaya might have information "helpful" to the Trump campaign, and was told by her during the meeting that she had something about Clinton.

In his most recent description of what occurred, on Tuesday, Trump Jr. said he had believed the information he would hear about Clinton would be political opposition research.

"The woman, as she has said publicly, was not a government official," Trump Jr. said in the Tuesday statement. "And, as we have said, she had no information to provide and wanted to talk about adoption policy and the Magnitsky Act."

Meeting of the ruling coalition begins
19 minutes ago