Elections  then and now

'Election used to be simple and cheaper in the past' 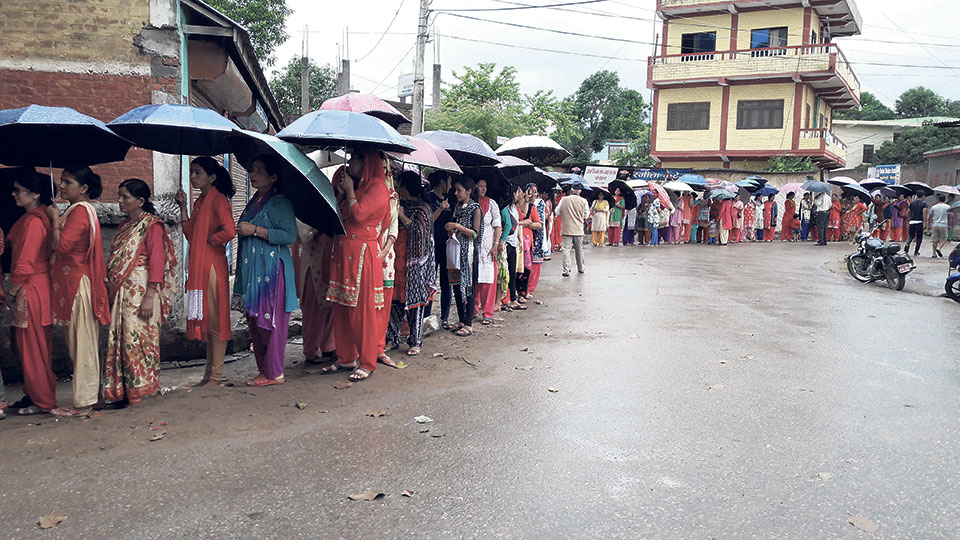 This file photo shows people in queue during the local level polls in Ghorahi, Dang held few months ago.

DANG, Dec 1: Octogenarian Tilak Bahadur Dangi had voted for the first time almost sixty years ago in 1959. The eighty-seven-year-old local of Tulasipur still has vivid memory of the general election of February 18 that year. Election those days used to be simple and cheaper, he reminisces. Nepali Congress had secured a two-thirds majority in the first parliamentary election of the country, which picked up late BP Koirala as the first elected prime minister of the country. Dangi fondly recalls the historic election even to this day.

“Do you know how the election was held?” the octogenarian questions, and gives the answer himself.

“There was no fear of any kind, no use of money and muscle as seen now,” he says.
According to Dangi, there used to be separate ballot boxes for separate candidates. A small red piece of paper with 'matapatra' written clearly on it would be handed over to the voters. It would also have the signature of the chief election officer. Voters did not need to use any stamp. All they had to do was to reach the ballot box meant for certain candidate and drop the paper, says Dangi.
“There would be as many ballot boxes as the number of candidates. We could recognize the candidates upon seeing the election symbols. Then, we just used to walk to the box and drop the paper,” Dangi said.

In those days, the government would not run voters' education. There was no need to ensure the validity of the votes, he says. “There was barely any election cost. I still remember that they later threw a huge feast for all,” Dangi narrated.

Dangi recalls that there used to be an agent with each candidate. And that agent used to bear the election cost. “They had to pay Rs 2,500 as guarantee amount for candidacy. Other cost would be borne by the agent,” he stated.

Dangi feels that votes are simply purchased today. That is why candidates are spending millions and millions of rupees to emerge winner. “We did not see any unnecessary expenses during those elections. Everything was just so genuine and simple. Candidate would have an agent who would register his or her candidacy,” he elaborated.

Over the years, election became expensive and corrupt game, the senior citizen notes. Unlike in the past, people now get easily influenced by money. “It is very shameful that they spend so much money to become an elected representative of the people. This kind of culture does not serve the people and the country,” he expressed his dissatisfaction.

Dangi has voted several times since 1959. Just like his first participation in election, the upcoming parliamentary and provincial elections are also historic. The country has seen lots of changes. However, until and unless money and muscle are discouraged in elections, the country cannot really claim the desired change, Dangi warns.