Election brings voters back to their home 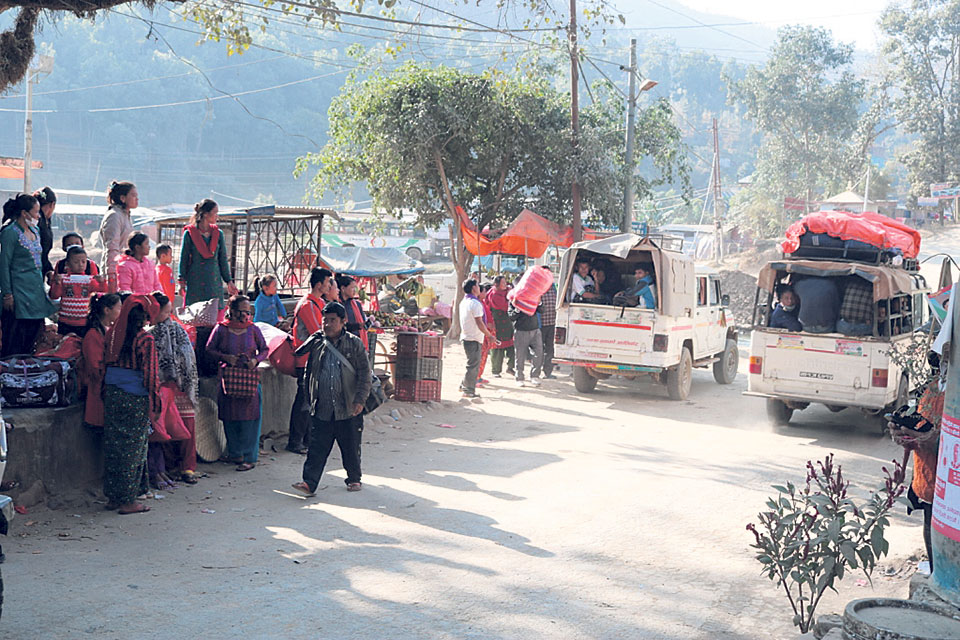 People board vehicles in Dhadingbesi on Friday to return to their hometowns in remote parts of the district to take part in the elections. (Republica)

DHADING/PARBAT, Nov 24: In order to exercise their voting right in the much-awaited parliamentary and provincial elections, many migrant workers and youths have returned to their hometowns.

The desire of experiencing change and development has compelled the voters to take part in the upcoming elections. "Candidates have vowed to build roads, reconstruct our quake-damaged houses and provide other facilities. So, I decided to cast vote for them and give them a chance to turn their agendas into reality,” said Shreemaya Tamang of Tipling.

A lot of people living in remote parts of Dhading shifted to the district headquarters after their houses were destroyed in the catastrophic earthquake of 2015. Since then, they have been living miserable lives in their makeshift tents. But, most of them have recently returned to their original places to cast votes. According to Shreemaya, they can travel up to Darkha Chauki from district headquarters Dhadingbesi in vehicles. After that, they have to walk for two more days to reach their homes.

"We hope we will be able to get rid of these makeshift tents and live a normal life in our own homes after the elections," she added.

Sher Bahadur Tamang of Lapa has also returned to his village along with his family to be a part of the elections.  He is very excited to cast vote for the candidate of his choice. "I don't want my vote to go in vain. I want to vote for a responsible leader who can shoulder our responsibility," he said. Being fed up with the tall promises of the leaders and candidates, locals this time have urged the candidates make genuine promises. While candidates are trying to woo the voters by selling larger than life dreams, locals have stuck to the local development agendas such as education, health and transportation.

Despite taking part in several elections, the problems and issues of locals were not addressed by the leaders. This has made them greatly disappointed with the politicians. Not just those living in the headquarters but those living in cities like Kathmandu, Pokhara, Chitwan among others have also returned back to their hometowns to cast their votes. It has been learnt that many of them have already reached their villages, while some are still on their way.

With less than 48 hours remaining for the much anticipated polls, an equal number of voters living outside of Parbat have also returned to their hometowns.

Every year, a large number of youths fly to foreign lands in search of employment. However, many of them have returned to their villages for exercising their voting right. People believe that this election will open doors for development in their local units so it is very important to take part in it.

It had just been 21 days since Dipendra Jung Lamichhane of ward no 6 of Modi Rural Municipality had returned back to work in Qatar after a long holiday. But still, he managed to take another leave for the elections and came back to Nepal on Friday. "The elections are more important than my job," said Lamichhane, adding, "There is no other reason behind my visit this time other than elections."

According to him, it is the responsibility of all Nepali citizens to choose leaders and representatives for bringing peace, development and stability in the country. "Our decision will determine the fate of our local unit, district, province and the nation as a whole," he added.
Likewise, Anil Chhetri of Paiyun and Siddhartha Chhetri of Bihadi have also returned to their homes for casting ballots. They came ten days earlier to make necessary preparations for the elections. Lamichane informed that hundreds of youths have returned from foreign countries to take part in the elections.

Lamichhane, who has taken part in three constituent assembly elections so far, said, "I have always played my part as a responsible citizen in the past and will continue doing so in the future as well."

As the candidates have assured to provide job opportunities for the youths, this has raised some hopes among the locals. They are tired of making rounds of government offices based at the district headquarters even for a minor document.

The desire for better life has compelled a large number of villagers to migrate to cities and towns in search of jobs and other facilities. This had turned a lot of villages empty. The only time when these locals visit their homes is during festivals like Dashain and Tihar. But these elections have not been any less than festivals. The vacant houses have been occupied by their owners once again.

RSP Chairman Lamichhane warns of quitting govt if the party is denied home ministry
3 hours ago
UML in favor of reinstating Lamichhane as Home Minister, Maoist Center opposed to the idea
9 minutes ago

No decision on home ministry leadership until full text of SC’s verdict on Rabi Lamichhane is out: PM Dahal
22 minutes ago

Pokhara-Baglung Highway to be closed for upgrading
39 minutes ago