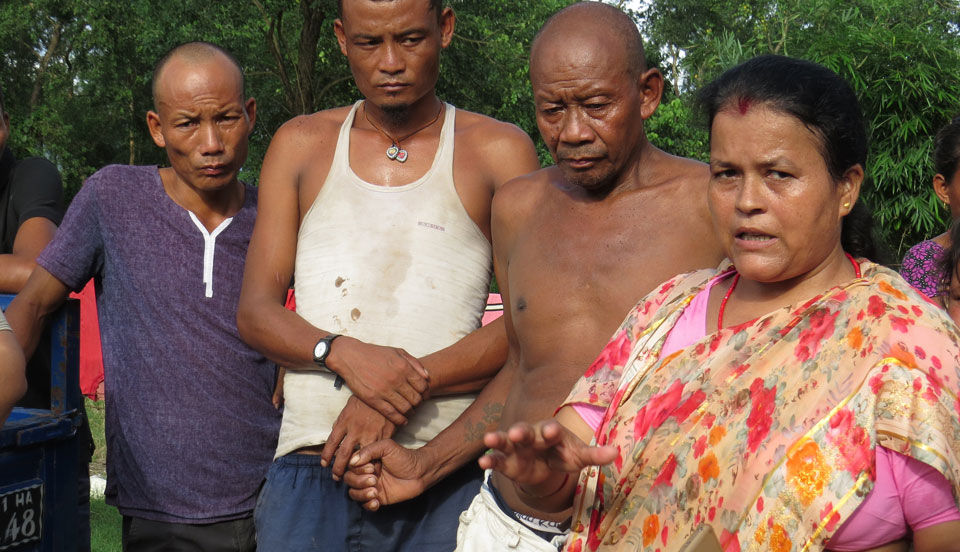 CHITWAN, Aug 20: It has been a tough week for Bir Bahadur Chepang of Rapti Rural Municipality ward-6, Pyaridhap, who is currently mourning the loss of his 74-year-old mother Phulmati Praja Chepang. His mother died in the flood of August 13 on Saturday midnight.

Their home is just a few minutes walk from a community forest and the Rapti River flows 400 meters further. Chitwan National Park is also nearby their home.

The flood did not cause any serious damage to Bir Bahadur's house though there are some cracks in the house. According to Bir Bahadur's wife Shreemaya, those cracks were formed when an elephant smashed into their house few days before the flood. Bir Bahadur got worried about the safety of his old mother when the wild tusker started breaking their house. In order to protect his loving mother form the terrorizing elephant, he moved his mother to one of his relative's home in the same village.

"It had been three days that I moved my mother to a safer place when the flood struck our village," laments Bir Bahadur. Within a few minutes, the house where his mother was sheltering was reduced to rubbles. "My mother got buried in the debris," he added. According to him, if the elephant had not troubled them he wouldn't have had to lose his mother.

Prabha Baral, mayor of Rapti Rural Municipality, who set out to meet the flood victims expressed her grief toward the sad incident. Locals had urged Mayor Baral to find out a long-term solution to eradicate elephant menace in the village.
"From the day of the flood we have been staying in darkness as there is no electricity," said Swastik Lal Chepang, a local, adding, "We have lost our sleep due to the increasing threat of elephants."

In Pyaridhap, there are around 80 households and all of them are Chepangs. As this settlement is close to the forests, locals are always under threat from wild animals.

The flood triggered by continuous rainfall affected the settlement only this year. However, elephants have been terrorizing the village almost every year. "They might come anytime and kill anyone," said Swastik Lal.

Even the electric fencing has proven to be weak in front of the wild elephants. So, instead of it, locals have demanded for a concrete wall along the forest for minimizing risk. Mayor Baral has assured them to address their demands in near future.

CHITWAN, August 21:  It has been a tough week for Bir Bahadur Chepang of Rapti Rural Municipality ward-6, Pyaridhap, who... Read More...

Elderly takes on life’s troubles all by herself

KATHMANDU, Sept 1: Be it rain or scorching sun, sixty-one-year-old Nanda Dhakal always looks unfazed. Every day, she sits under the... Read More...