Economic diplomacy is a key to enhancing Nepal-India relations 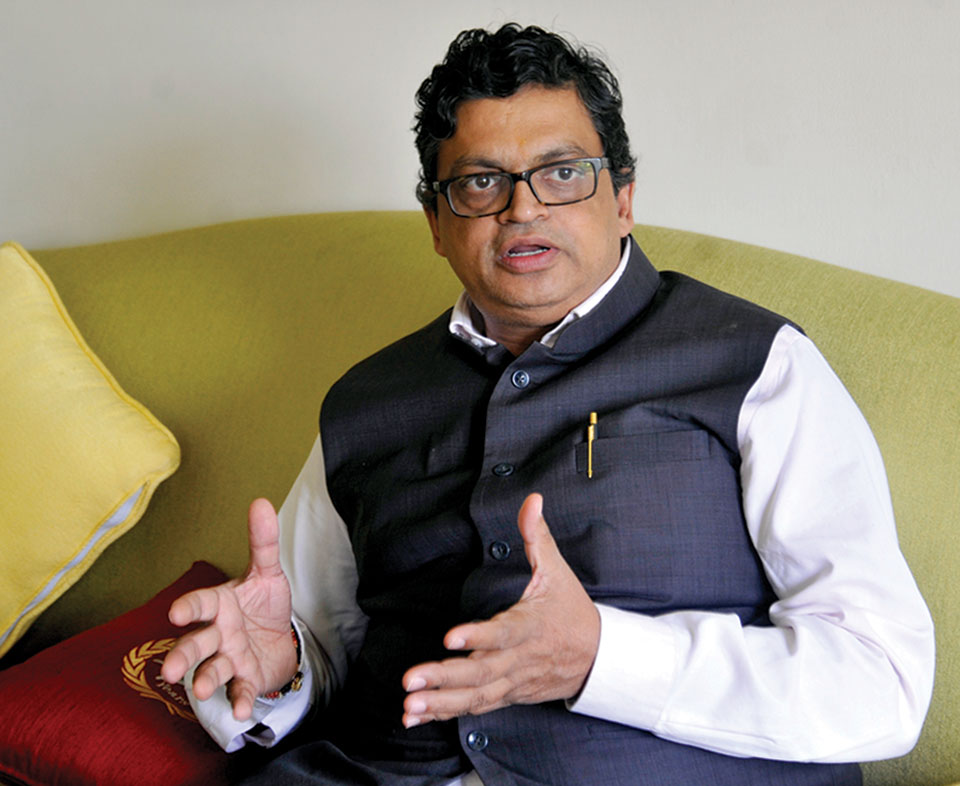 Gopal Krishna Agrawal is the National Spokesperson on Economic Affairs for ruling Bharatiya Janata Party of India. How does he see Nepal-India economic relations? How can this relations be enhanced? Mahabir Paudyal and Kosh Raj Koirala spoke to him on Nepal-India economic ties and other aspects of bilateral relations while he was in Kathmandu last week.

    India has always maintained that it’s up to Nepal to do whatever is best for Nepal.
    If Nepal establishes direct contact with Indian industrialists, it would know their concerns directly and also find out the factors that have hindered investment in Nepal.
    After the success of Arun III more companies are interested to come to Nepal and invest.
     Central banks of Nepal and India should work to resolve issues related to demonetized Indian currency in Nepal.

How do you see the current status of Nepal-India relations?
We are working on making Nepal-India relations much better than what it is today. Nepal is very important country for India’s international relations. This is why Prime Minister Narendra Modi visited Nepal right after assuming office in 2014. We find so many common issues with regard to economy between Nepal and India. Thus we can have a very good business and economic relations. Economic relations are much important for these countries because economic relations are becoming more important between and among the countries across the whole world. Economic issues can be more easily identified and they are as easier to resolve because they are based on give and take and mutual benefits. There will be few contentions in business relations than would be with political relations.

You say so but Nepal has had huge trade deficit with India.
I was recently speaking on foreign direct investment issue here in Nepal. Across the world, every country is looking to attract more FDI.  FDI is one of the criteria which decide what will be the future of country’s economy. It is important for capital formation and building of infrastructures. India has been successful in attracting huge FDI over the last few years. We have been able to get 62 billion dollars of FDI, which is the highest FDI across the world.  But a country cannot raise FDI rate simply by asking others to come and invest. Most of such investments come from the private sector. And private investment comes to those places where you have strong regulatory bodies.  They look into which regulatory set ups are there that can come to their aid when something goes wrong with business. Foreigners are ready to invest in India because we have strong and autonomous set ups in many of the fields such as banking, capital market, insurance, telecommunications etc. For each of these sectors, we have a separate regulatory body to boost the confidence of the investors.

Thus the more you build autonomous and independent regulatory institutions the more it will raise confidence of foreign investors. And the more you will be able to attract FDI. I think this applies to Nepal as much it does to India.

The importance of FDI is obvious but how can Nepal reduce trade deficit with India?
One of the ways would be if the two countries maintain relations with industrialists with both sides, instead of focusing on only government-to-government relations.  It’s better for Nepal and India to organize bilateral economic conclaves at a reasonable frequency so that they can discuss issues and find solutions.  Private sector bodies of Nepal can have direct contact with Indian investors through Indian business organizations.  If they talk with each other directly, many things can be settled. The government of Nepal can also communicate their policies directly with the Indian industrialists. If Nepal establishes direct contact with Indian industrialists, it would know their concerns and also find out the factors that have hindered investment in Nepal.  The government will also come to know directly what their concerns are and how those concerns can be addressed. Equally important is to incentivize the investment.  Creating Special Economic Zones, cluster development models, integrated supply chain models with global suppliers etc are some incentivizing factors.  They have done a lot for India. Such ideas might be as useful for Nepal.

Many Indian investors are willing to invest in Nepal. Nepal has a lot of hydro potentials. After the success of Arun III more companies are interested to come to Nepal and invest.  Indian companies are also interested to invest in tourism, education and many other sectors. Private education industrialists can set up their institutions in Nepal.   If two countries have good business relations it will directly contribute to minimizing tensions, if any, on diplomatic and political fronts.  Economic diplomacy can become a key tool in further enhancing Nepal-India relations.  This is what is happening globally. Leaders across the globe are now more focused on economic issues. Through economic cooperation and considerations it is easier to build better diplomatic relations.

The demonetization drive was criticized by some sections at one time. How has it helped Indian economy?
You cannot look into any initiative in isolation.  When our party took over, there was a problem with regard to tax compliance and large part of business transaction was not being channeled through financial institution mechanism.  There was a need to push transaction through digital banking. We had to establish the audit trail of business transactions. And there was a need for identifying the concerns of liquidity and the issue of shifting the informal sector into formal sector. Several other steps together with demonetization helped into creating an ecosystem whereby we are moving informal sector into formal sector.  The GST could not have been as successful if we had not made concerted efforts to moving towards digital economy and digital banking. Cumulatively, demonetization has created an ecosystem that has greatly helped minimize corruption. We have been able to establish audit trail of all transactions.  The government has deregistered around four hundred thousand companies found in money laundering. Because of these steps, we now have more transparent and corruption-free eco system and it’s easier to do business in India. Most of all, tax compliance has increased, thanks to audit trail.

Demonetization has affected a lot of Nepalis. The government of India has refused to exchange Indian currency possessed by many Nepalis.
I think this is for Reserve Bank of India to decide. Central banks of Nepal and India should work to resolve issues related to Indian currency in Nepal.

One of economic issues in India at the moment is depreciation of Indian rupees against US dollars. This might have direct bearing on Nepali economy for our currency is pegged with Indian currency.
Rise of petroleum price and depreciation of Indian rupees against dollars are two issues facing us at the moment. There are global factors behind it. This could have been addressed by direct intervention by the central bank but the government has decided it is not yet time for intervention for domestically we are in better situation. Our GDP grew by more than 8.2 percent.  Inflation is well under control. It is 3.6 percent at the moment. Our foreign exchange reserve is more than 24 billion dollars, which is very healthy. Our current account deficit is well within the limit.  And we are getting a lot of FDI. Depreciation is largely driven by external factors. Our domestic factors do not require us to act for immediate strong measures.

Exporting ginger to India from Nepal has rarely been a hassle-free undertaking. Now and then Nepal-bound containers are held up in Kolkata port.
You should not take one or two sporadic incidents and make a judgment. The intention of the Indian government is very clear.  Our focus is on smooth trade between the two countries and establishing even better connectivity for this.  We are developing connectivity infrastructures including with Nepal to enhance trade relations.  India has put BBIN in priority for the same purpose.   The government is open to resolving all kinds of issues. Media reports sometimes create completely different perceptions. We need to read them critically. We have good trade relations even with countries with which India does not have so special relations.  We have special relations with Nepal.  There is no reason why we cannot have smooth trade with the neighbor with which we have a special relations.

One of the persistent concerns of your party has been regarding Hinduism in Nepal. One of the former Nepali prime ministers recently said India imposed blockade on Nepal in 2015 because Nepali leaders failed to address India’s concern related to Hindu state.
I think it is unwise to link what you call blockade with Hindu concern. Indian government has consistently denied blockade. Yes, India showed some concern for people of Tarai but at the same time India has always maintained that it’s up to Nepal to do whatever is best for Nepal.  The opinions of general people should not be equated with opinions of the government.  As for Hindu state, we had always appreciated Nepal as a Hindu state because over 85 percent of Nepalis are Hindus.  India is also a Hindu dominated country. So there have always been positive sentiments among Indians regarding Hindu state status of Nepal.  But that too, like I said, is the public opinion.  India is a secular country. We cannot say what should be the status of Hindu religion in Nepal. It’s for Nepal to decide.  The government does not have any position on this.  What individual leaders say are individual opinions. They should be understood as such.

India's Modi may face some civil service departures from his office if re-elected: sources

NEW DELHI, April 10:The Indian government may have to make a series of major changes at the top of the... Read More...