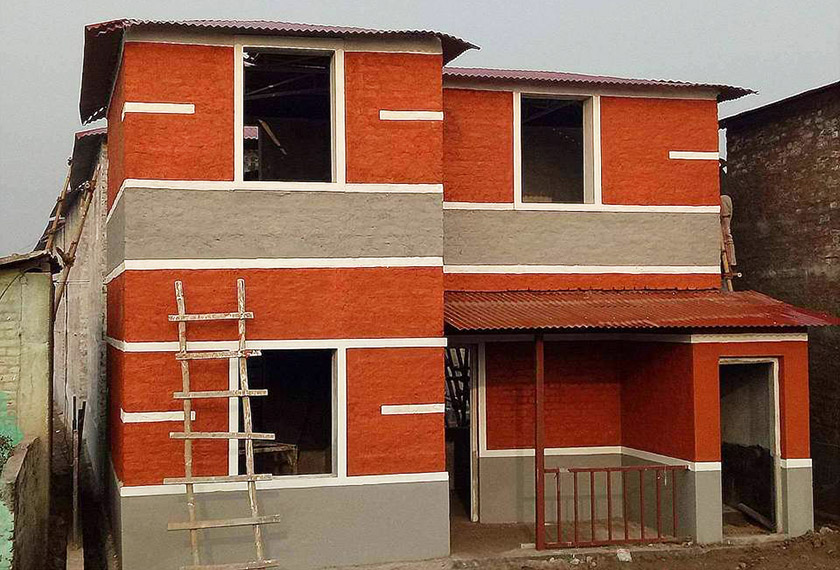 KATHMANDU, Jan 11: The construction of Santapur integrated settlement of Rautahat has affected due to economic deficiency, which is being constructed by Dhurmus-Suntali Foundation.

A comedy artist and social activist, Durmus and Suntali, who has been constructing the santapur settlemet, said that there is a lack of Rs. 1.50 million for the construction.

He said that the cost of construction of the settlement was estimated to Rs. 5.95 million but more than 4.31 million has spent, and need surplus financial support.

Dhurmus promised to handover the settlement on February 7 but due to the financial crisis, it is challenging. He is optimistic to collect financial assistance.

"We have completed nearly all the work of the construction of the settlement till now, but we have not been able to pay for the work, but also we are fully optimistic that we have collect financial assistance of Rs.1.50 million," he said.

He said that he has already constructed an integrated settlement in Kavre, Sindhupalchowk, and Bardibas. He also expressed his hope that he will get heartfelt support to complete the settlements for flood victims.

The Foundation has also distributed blankets to the poor people of Saptari district.

MAHOTTATRI, Jan 21: Construction works of the model earthquake-resistant integrated settlement for a Musahar community in Mahottari district by the... Read More...

SINDHUPALCHOWK, May 1: Earthquake victims in Sindhupalchowk have been increasingly attracted towards integrated settlement. The attraction is fueled by the... Read More...

Statue of Bhrikuti at Bhrikuti Fun Park unveiled
18 minutes ago