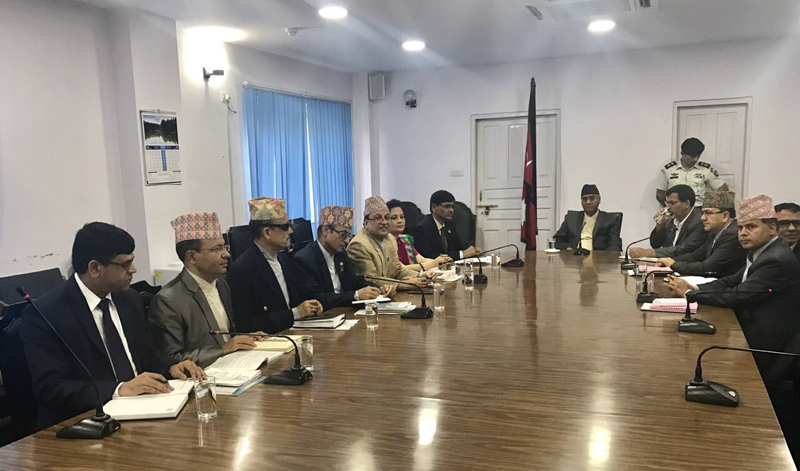 Election commissioners who met PM Deuba at the latter's' office in Singha Durbar urged to promulgate laws related to provincial and central parliamentary elections at the earliest. They also demanded the formation of the crucial CDC saying that upcoming elections could be affected if these legal and administrative hurdles were not resolved on time.

"We are already facing time constraint to hold two elections back to back. But the government is delaying to formulate laws and resolve constituency delineation issues," said Election Commissioner Narendra Dahal, adding, "Like in our previous meeting, we urged the prime minister to clear the legal and administrative hurdles."

Earlier, the election commissioners had requested PM Deuba on July 1 to clear the legal hurdles. The prime minister had promised them to formulate the laws within a week. But the laws are yet to be promulgated and the CDC has not been formed yet.

Bills related to provincial and central parliament have not yet been registered at parliament.

The EC has urged the government to get electoral laws ready by July 15 and prepare the report of the CDC by July end.

Responding to the election commissions' concerns, PM Deuba assured them of doing the needful at the earliest.

Since the constitution has set January 21, 2018 as the deadline to conduct all sets of elections, the EC - the constitutional body mandated to hold elections - is under pressure to meet the deadline.  The election body has already proposed its work calendar aimed at concluding the remaining elections on time.

Currently, there are currently 240 electoral constituencies for central parliament under the first-past-the-post system and the number needs to be reduced to 165 as per the new constitution. Altogether 330 constituencies should be created for provincial assemblies.

Reducing the number of electoral constituencies to 165 within the deadline set by the election body is considered a tough job given that the Madhes-based parties are already protesting against the existing provincial boundaries.  The agitating Madhes-based parties want a fresh constitutional amendment bill tabled at parliament and endorsed before any election takes place.

KATHMANDU, August 26: Concerned over the delay in promulgating electoral laws, the Election Commission (EC) has asked the government to... Read More...