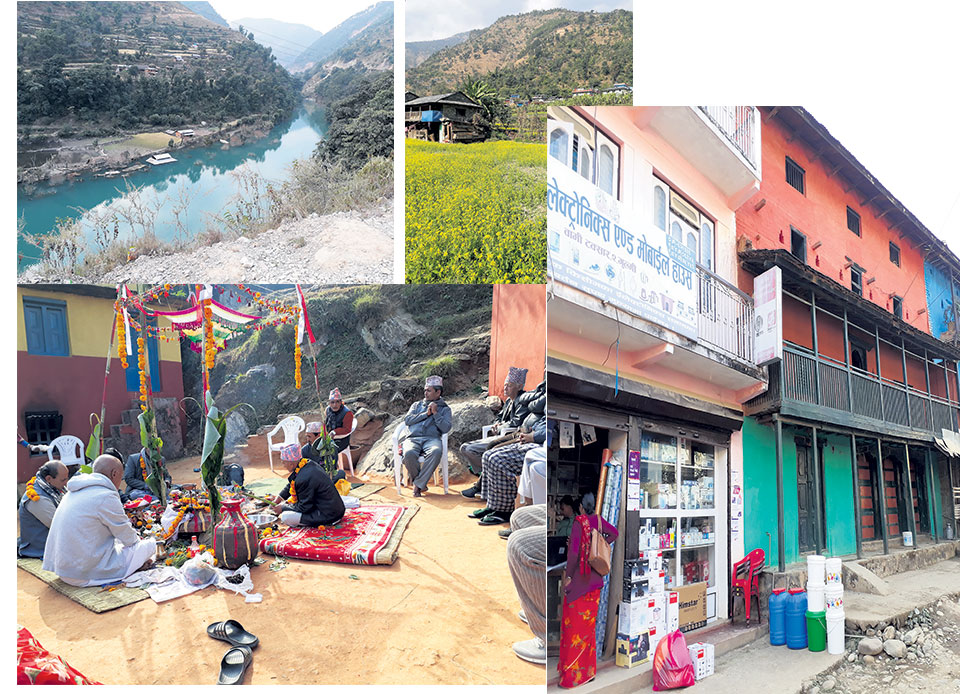 For the first time, the roads to Malekhu and all ways west held no allure for me. December, I learnt, isn’t the best time to travel if the sun shining bright and lush green trees were what you are hoping to see. I was reminded of the post apocalyptic scenes in the dystopian movies I’d seen as we made our way further west – dust billowing (as in interstellar level), the leaves withered and enveloped in a thick layer of said dust, and the sun over your head, scorching hot. Whoever said that you don’t come to Nepal for a desert experience, come here in the winters.

I was on way to Baglung, the land of my ancestors. My paternal side of the family has very strong ties to Baglung. Despite most of them having migrated to either Pokhara or Kathmandu, Baglung is the basis of all their conversations. I’ve loved the place ever since my first trip there at the age of four. I don’t remember the trip vividly but I do remember being carried all the way through the four-hour climb up into the village on the backs of my cousins. Perhaps why I remember this particular detail with fondness is because seven years later when I came back, I was too old to be piggybacked and thus had to make the entire walk on foot. These are the times you regret having grown up.

Baglung to me has always been about the many impossible to climb hills. There are narrow trails that test your balance, where should you fail you would plunge to death. There are wood and mud houses that were often smaller than the bedrooms in my house in Kathmandu. A 15-minute walk separated one mud house from another. The air is cool and it cleansed my lungs of all the nastiness of the cities.

Baglung is also as much about its people as it is about its hills. The young and the old, everyone was uncomplicated. They made their community, family, and themselves the center of their lives, and topics like politics and the higher purpose of life held no interest for them. The children ran up and down the slopes in lightning speed, almost as if mocking us for being slow. I didn’t want to trip on a stone I told myself then, body agility or lack of it had nothing to do with my slow steps.

So when I returned to Baglung at the age of 19, I carried with me the memories of my past visits. The frittering children, the mooing cows, and the older aunties speaking in their honey coated dialects. But I came to abandoned houses that echoed with silence, to cool mud stoves that haven’t been touched for months if not years. And everywhere I asked about the children I remembered playing with, the answer was always the same – they have migrated to the bazaar, Kathmandu or Pokhara. Those who remained behind to answer my questions were people well past their sixties.

We had come to our ancestral home for a religious ritual and it was one of the rare occasions where most members of my extended family met one another. Not even Dashain brings everyone together. But it wasn’t just my family members who attended the ceremony. It was the entire village of Tityang or what’s left of it anyway. Turns out, on occasions like these the entire village makes it their business to see to it that the event goes without a hitch.

Everyone brought in his/her own tubs of butter and milk (and I did not hesitate to sneak in some tasting). Young girls and aunties mixed, in the largest bowls imaginable, shredded cabbages and spices to concoct their own versions of achar. How they relished licking off the spices on their hands! One lady, without any preamble, took over the mud stove and set about to make rotis for the Brahmins. She searched the kitchen as if it were her own and found all the ingredients herself. One aunty would do the rolling and the other the cooking. It surprised me how everyone assumed their responsibilities without ever being instructed to. This sense of communal cooperation in this village and other several villages I have traveled to has amazed me time and time again and it did then too. But come evening, they would all leave for their homes in the bazaar or Pokhara.

People up there are kind but, as it turned out, also lonely. They tell me this as they tend to my potatoes roasting in the dying embers. There isn’t one child running up and down the trails or even youths causing a ruckus every other day. The village is filled with grandmothers who long for a meeting with their grandchildren, wives who live solitary lives in their huts awaiting the return of their husbands who serve in the Nepal Army. The average age up there is 50 years with a higher positive standard deviation than negative. The fields are unattended because the elderly lack the strength or the even the energy to tend to them. The village has, in my memory, always been quiet but it is silent now.

I don’t mean for this to be a lament for villages being vacated. Everybody seeks better opportunities, as do I, and I understand the human need to progress and achieve. And it would be hypocritical of me to suppose that they would be content living in the villages where good opportunities are hard to come by. But I also feel nostalgic for life as I once saw and experienced in the villages. If so much has changed in the past decade or less, I wonder what will become of Baglung in a few years’ time. And the thought makes my heart heavy.