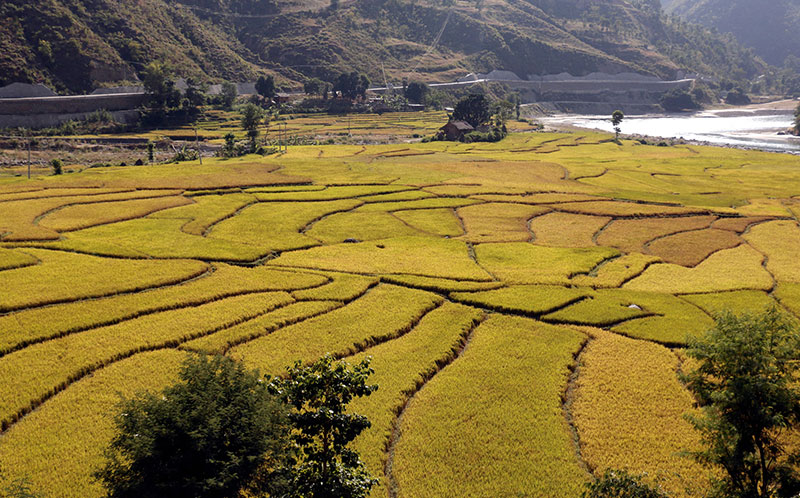 KATHMANDU, Jan 4: A noticeable fall in the rice production this year is likely to beat national economy. Experts predict that it would have its implications on the Gross Domestic Product.

Rice is the staple crop of Nepal and its stake in the GDP is 12 percent. The Ministry of Agriculture and Livestock Development in a press statement informed that paddy production went down this year by 1.05 percent compared to last year. It cited lack of timely rainfall, plotting of arable land, inundation in the Tarai/Madhes, lack of sufficient irrigation facilities and youth population deserting from agricultural activities as causes for the drop in rice production.

This year, country's rice production fell by 59,000 metric tons compared to the previous fiscal and it was limited to 5,551,000 metric tons against 5610,000 in the last year. According to the 2011 national census, around 6,000,000 metric tons of rice is required to meet the national demand. The Agricultural Census 2011 (2068BS) states that agricultural sector has its 32 percent contribution to the GDP.

Despite being an 'agricultural country', Nepal is heavily dependent on import for rice as other agricultural products and so many other commodities. Last year, it imported rice worth Rs 28 billion.

Cultivation of main season rice (which takes place during rainy season), spring rice (takes place during the Nepali month of Chaitra or pre-monsoon period) and Ghaiya (a kind of upland rice) is conducted in Nepal.

Rice farming largely relies on rainfall for water. Of total arable land in Nepal, rice cultivation takes place in around 50 percent. In the last 15 years, it was 2003/04 (2060/61) fiscal year that witnessed maximum rice plantation. The rice was planted in 1.5 million hectares of land that year, while the production was 4.4 million tons of rice. After 11 years in 2015/16 (2072/73), the country planted rice in 1.3 million hectares of land, producing 4.2 million tons of rice. Every year, the land to produce rice is reducing.

The statistics maintained at the Ministry of Agriculture and Livestock Development, however, shows that the land for rice cultivation has been shrinking but the production keeps on growing. Currently, 1.3 million hectares of land is left uncultivated.

In Nepal, all districts except Manang and Mustang grow rice.

EU to conduct safety audit of Nepal from Thursday