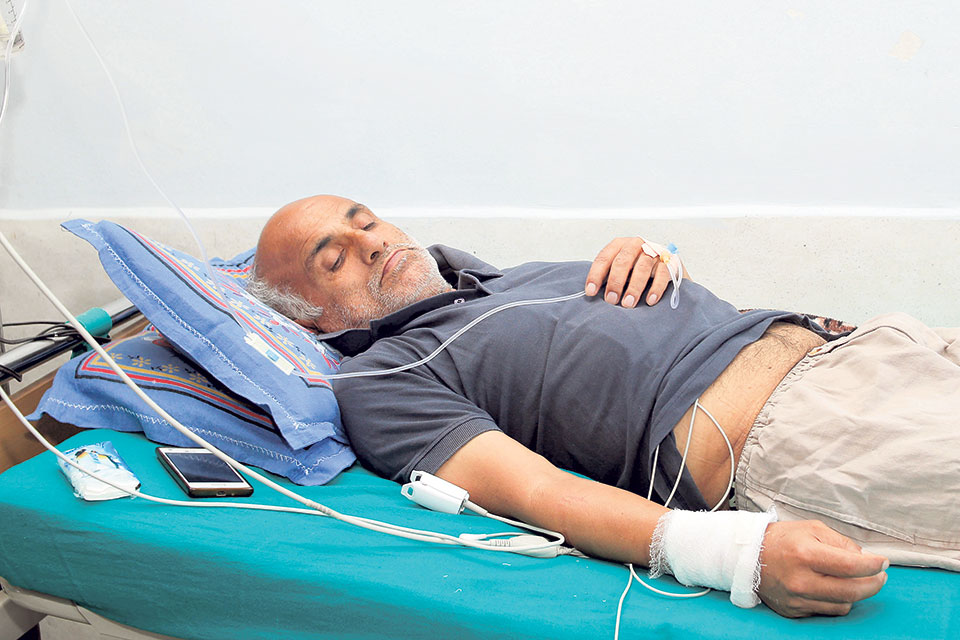 Dr Govinda KC on the ninth day of his fast-unto-death at TU Teaching Hospital on Friday. The parliament is winding up Saturday without seeing the tabling of the medical education bill. Passage of the bill is one of Dr KC’s key demands. (Dinesh Gole/Republica)

KATHMANDU, Oct 13: Solidarity for Dr KC Alliance has planned a mass demonstration in Kathmandu on Saturday, to support the hunger strike staged by Dr Govinda KC demanding reforms in the medical education sector.

“We are going to stage a huge demonstration at noon at Maitighar tomorrow,” said Jagannath Lamichhane, activist of the alliance, on the eve of the protest. “As Dr KC was forced to stage 13th strike after the government cheated him in the past by signing different agreements but without implementation, we have decided to stage the protest” he added.

At a time when corruption is rampant in the country including in the medical sector, the parliament is being dissolved Saturday without approving the bill on medical education, one of the major demands put forth by Dr KC, according to the alliance.

“So, we urge all the well-wishers of reforms in medical education, members of the political parties and their sister organizations, journalists, members of the public and people from different professions to take part in the demonstration to generate pressure against the state,” said Lamichhane. “We have to go hand-in-hand with Dr KC as he has been fighting alone for the interests of the ordinary people.”

KATHMANDU, July 24: At least 10 supporters of Dr Govinda KC were injured when police lathi-charged them in Tangal of... Read More...

KATHMANDU, July 24: Police have arrested 10 protesters who were staging a sit-in outside the Commission for the Investigation of... Read More...