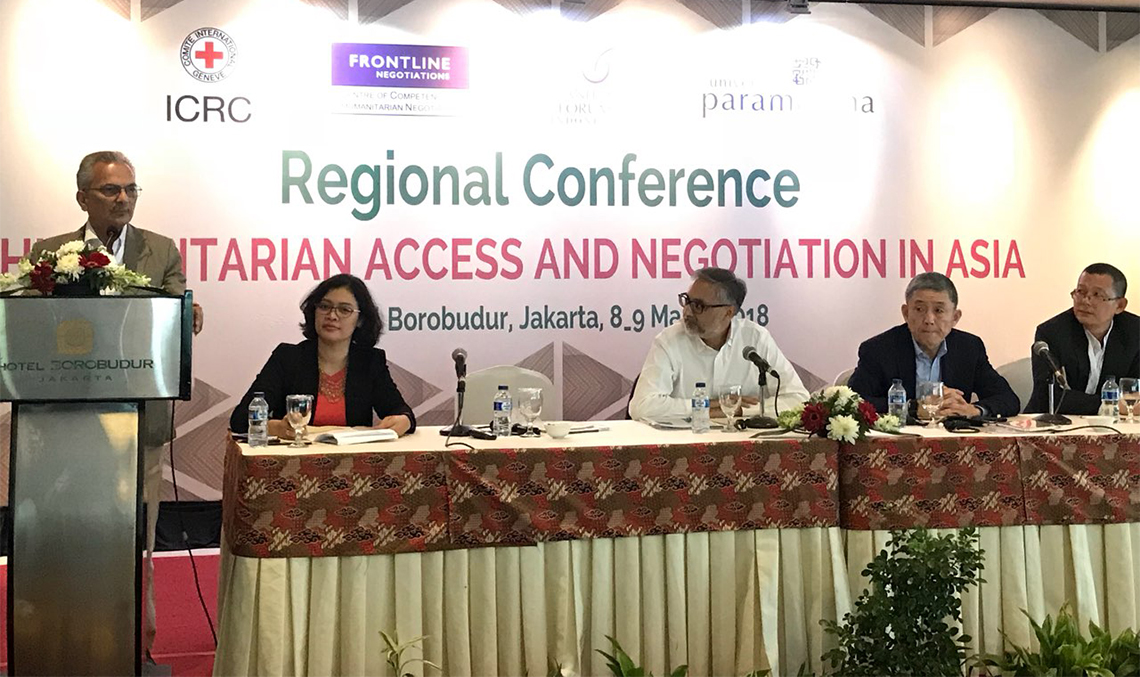 KATHMANDU, March 8: Former Prime Minister and Naya Shakti Party Nepal Coordinator Dr Baburam Bhattarai has said that the Nepali peace process had been led by the Nepali people themselves.

Bhattarai, who led the armed insurgency, charged that the government, politicians, experts and international community failed to admit that the insurgency was of the political nature.

(Read the full text of speech delivered by Dr. Baburam Bhattarai on the Regional Conference on Humanitarian Access and Negotiation in Asia that it taking place in the Indonesian capital Jakarta since Thursday.)

Every conflict or problem is political in nature at the beginning. The solution to this problem should be discovered. The cause behind it should be diagnosed.

Nepali rulers took the decade-long Maoist insurgency only as the security issue. That is why they used armed police force and military as a solution to the problem, resulting in the death of 13,000 Nepali people that include over 800,000 insurgents and other innocent Nepali people.

The insurgency continued for a long time as opposed to the expectation of many Nepali people. Government, politicians, and experts made a mistake by not recognizing the political cause behind it.

The aim of the revolt was to establish a democratic, just and judicial society, by ending despotic monarchy, centralized and unitary political system. A big chunk of the society were marginalized and discriminated on the basis of religion, geography, gender, languages and ethnicity.

The system was designed to make the poor – poorer and the rich -the richer.

Therefore, the security issue was only a paradigm of political crisis. This was not the actual cause. Therefore, we should be sensitive about the political cause that led to the insurgency in Nepal and the humanitarian access be prioritized accordingly. The organizations working for the humanitarian issues should not overlook this issue.

We had urged the international community not to be misled by the unilateral propaganda made by the then ruler Gyanendra Shah who was trying to justify the relevance of military use.

We had strongly objected to the killing of innocent people, women’s rape, press censorship, action against people holding different voices.

In the ceasefire of 2003, one of the demands we had put forth was to impartially investigate the human rights violations. Similarly, we expressed commitments to comply with the Geneva Treaty and entered into the ceasefire code of conduct. Then we released those who were in the Maoist custody in the presence of human rights activists and ICRC.

The political will power is seen still lacking in reviving the transitional justice system. That is why humanitarian organizations are still relevant in the context of Nepal.

The peace process of Nepal was led by the Nepali people themselves. It was home-grown, not mediated by foreign power. However, we must here admit that the role of international community in the peace process was important, though not decisive.

It is also important to respect the wishes of the citizens of the country who do not want to depend on the humanitarian assistance and international organizations to end the political conflict.

The other aspect to be noted about Nepal is its geo-political situation. Nepal is sandwiched between two Asian giants – China and India. Nepal cannot afford to accept the international assistance at the cost of worsening the relationship with the neighboring countries.

To sum up, humanitarian talks through the international organizations could be fruitful if the time and context were appropriate. No humanitarian talks would yield fruitful results if done so without people’s participation and domestic support. (March 8, 2018.

Why We should All be Feminists
24 minutes ago