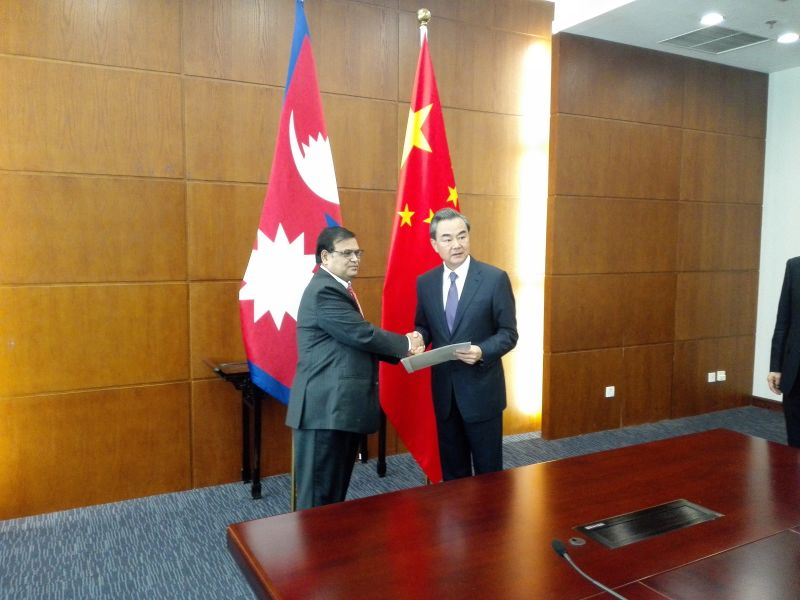 KATHMANDU, Aug 17: Chinese Foreign Minister Wang Yi during his meeting Tuesday with Deputy Prime Minister Krishna Bahadur Mahara in Beijing has highlighted the importance of execution of agreements and treaties between Nepal and China for the economic and infrastructural development of Nepal. Mahara is in China as a special envoy of Prime Minister Pushpa Kamal Dahal.

According to Nepali Embassy in Beijing, Mahara handed over the invitation letter from the President to Chinese President Xi Jinping to visit Nepal.

On the occasion, Wang suggested that the execution of agreements and treaties between the two countries without delay would be significant for Nepal's economic growth.

"Wang and DPM Mahara held an hour-long meeting and discussed bilateral issues. They discussed the changing situation of Nepal, formation of new government, the agreements and treaties between two countries and execution of new constitution in Nepal," said Acting Ambassador in Beijing Harishchandra Ghimire, who was present during the meeting.

During his week-long China visit in March, the then prime minister, KP Sharma Oli, had inked 10 agreements and treaties with China, including the trade and transit treaty.

Meanwhile, Mahara is scheduled to meet Chinese Premier Li Keqiang on Wednesday. According to sources at the Ministry of Foreign Affairs (MoFA), DPM Mahara will meet the Chinese Prime Minister at 10 am (local time) on Wednesday.

Mahara will return home on Friday.

Meanwhile, DPM Nidhi is all set to fly to New Delhi on Thursday on a three-day visit to India as a special envoy of Prime Minister Dahal.

According to a source close to Nidhi, the DPM will call on Indian President, Prime Minister, Foreign Minister and Home Minister on Friday and Saturday in Delhi. A joint-secretary from the Ministry of Foreign Affairs will also accompany the Nepali delegation.

The government on Thursday had decided to send DPMs Nidhi and Mahara to India and China respectively as special envoys of the prime minister to strengthen relations with the two neighboring countries.