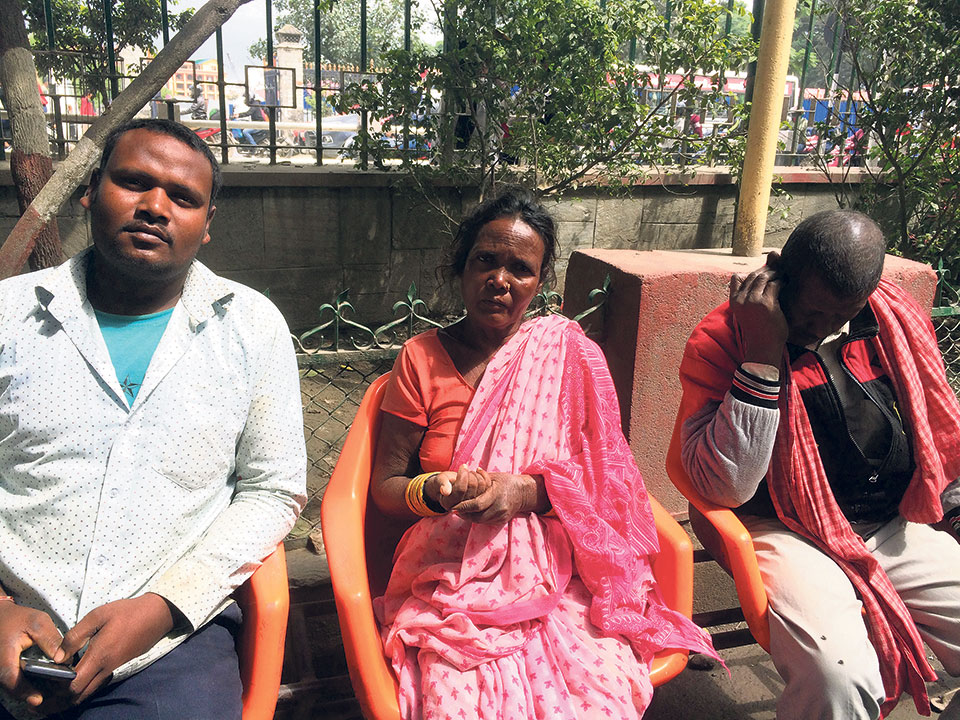 From left, Ram Bahadur Majhi, his mother and his father, who is suffering from kidney-related ailment, on Bir Hospital premises, Monday. | Photo: Diya Dhakal/Republica

KATHMANDU, Sept 4: The doctors' strike on Sunday brought health services in the country to a standstill, leaving hundreds lined up in front of hospitals in the hope of receiving treatment. With nowhere else to go, many patients from outside the valley were forced to spend the night on cold hospital floors.

Ram Bahadur Majhi is one among many who was left stranded in Bir Hospital after doctors denied him treatment as they staged a protest against the new Criminal Code 2017, demanding immediate amendments to a clause of the Code that has a provision to deal with the doctors under criminal offenses if he or she is found responsible for negligence in treatment.

Majhi, who is a local of Juribela traveled from Rautahat to Kathmandu with his parents after doctors failed to fully diagnose his father who suffers from some sort of kidney problem. He had arrived in Kathmandu on Thursday but hasn't been able to see a doctor yet. “The administration here is terrible. Patients like us are sent from one place to another like flocks of sheep”, he said.

According to Majhi, hospital officials had told him to get a report of blood and urine tests before visiting the doctor. The reports were to arrive on Sunday but the doctors' protest jeopardized everything with only the emergency ward open. He said that the results of the report had been postponed to 10 am on Monday but by the end of the afternoon, the reports seemed a distant dream.

Being stuck in the hospital for a surprising five days has been troublesome for the family. With no place for shelter, the trio has been forced to spend the nights in front of the hospital gates. Majhi spent approximately Rs 10,000 in the last five days, a hefty amount for a family whose survival depends on extremely limited expenses.

Majhi is clueless of what the diagnosis will be and if his father will have to be admitted. He believes that it is the hospital's carelessness that has led to such a delay in diagnosis. “Even on Sunday's strike, the doctors were letting in their own people for treatment while we villagers were left outside the hospital premises.”

Mohan Krishna Shahi from Kathmandu Ganeshthan is another of the many patients left as bystanders due to Sunday's protest. He was to undergo a minor surgery on Sunday but the protest barricaded the operation. “The patients were in total frenzy yesterday,” Shahi said while trying to describe the circumstances during yesterday's protest.

The strike was organized in protest of the Criminal Code 2017 which has provisions of three to five years of imprisonment along with a fine of Rs 30,000 for a doctor if a patient dies due to his/her negligence. The Nepal Medical Association (NMA) has accused the government of categorizing doctors as criminals through this law. Doctors in Kathmandu marched from Maitighar to New Baneshwar on Sunday which was the first day of the scheduled protest.

DHARAN, Sept 24: Jamuna Rai, who has been suffering from the neurological disorder, is originally from Udayapur. Currently, she is... Read More...

RASUWA, August 27: Almost 27 months have elapsed since the devastating earthquake of 2015 but the government is yet to rebuild... Read More...