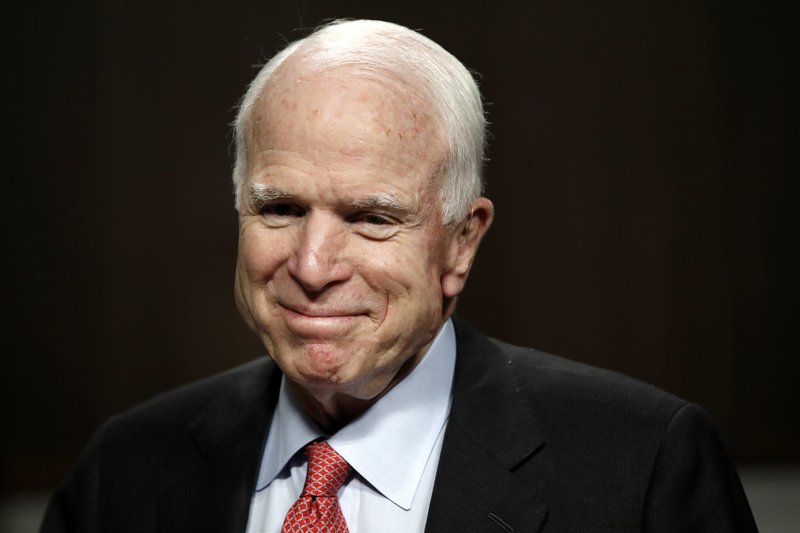 WASHINGTON, July 20: Arizona Sen. John McCain, the 2008 Republican presidential nominee with a well-known maverick streak that often vexes his GOP colleagues, has been diagnosed with a brain tumor, his office said in a statement Wednesday.

The 80-year-old lawmaker has glioblastoma, an aggressive cancer, according to doctors at the Mayo Clinic in Phoenix, where McCain had a blood clot removed from above his left eye last Friday.

“Subsequent tissue pathology revealed that a primary brain tumor known as a glioblastoma was associated with the blood clot,” his office said in a statement.

According to the American Brain Tumor Association, more than 12,000 people a year are diagnosed with glioblastoma, a particularly aggressive type of tumor. The American Cancer Society puts the five-year survival rate for patients over 55 at about 4 percent.

The tumor digs tentacle-like roots into normal brain tissue. Patients fare best when surgeons can cut out all the visible tumor, which happened with McCain’s tumor, according to his office. That isn’t a cure; cancerous cells that aren’t visible still tend to lurk, the reason McCain’s doctors are considering further treatment, including chemotherapy and radiation.

In a statement on Twitter, his daughter, Meghan McCain, spoke of the shock of the news and the anxiety over what happens next. “My love for my father is boundless and like any daughter I cannot and do not wish to be in a world without him. I have faith that those days remain far away,” she said.

The senator and chairman of the Armed Services Committee had been recovering at his Arizona home. His absence had forced Majority Leader Mitch McConnell, R-Ky., to delay action on health care legislation. McCain had been slated to oversee debate of the sweeping defense policy bill in the coming weeks.

As word spread of his diagnosis, presidents past and present along with McCain’s current and former Senate colleagues offered support in an outpouring rarely seen in Washington.

“Senator John McCain has always been a fighter. Melania and I send our thoughts and prayers to Senator McCain, Cindy, and their entire family. Get well soon,” President Donald Trump said.

Barack Obama, who dashed McCain’s dreams of the presidency, said in a tweet: “John McCain is an American hero & one of the bravest fighters I’ve ever known. Cancer doesn’t know what it’s up against. Give it hell, John.”

McCain has a lifetime of near-death experiences — surviving the July 1967 fire and explosion on the USS Forrestal that killed 134 sailors; flying into power lines in Spain; the October 1967 shoot-down of his Navy aircraft and fall into Truc Bach Lake in Hanoi; and 5 1/2 years in a North Vietnamese prison.

“The Hanoi Hilton couldn’t break John McCain’s spirit many years ago, so Barbara and I know — with confidence — he and his family will meet this latest battle in his singular life of service with courage and determination,” said former President George H.W. Bush.

McConnell called McCain a “hero to our conference and a hero to our country.” Democratic Sen. Chris Coons of Delaware said McCain “is a fighter, and I am hopeful he will once again beat the odds.” Arizona Gov. Doug Ducey described McCain as “undoubtedly the toughest man in the United States Senate.”

Politics aside, McCain and Bill Clinton developed a strong friendship, and the former president said: “As he’s shown his entire life, don’t bet against John McCain. Best wishes to him for a swift recovery.”

McCain’s office disclosed the removal of the blood clot late Saturday and said the senator was awaiting pathology reports. In the past, McCain had been treated for melanoma, but a primary tumor is unrelated. Doctors said McCain is recovering from his surgery amazingly well and his underlying health is excellent.

With his irascible grin and fighter-pilot moxie, McCain was elected to the Senate from Arizona six times, but twice thwarted in seeking the presidency.

An upstart presidential bid in 2000 didn’t last long. Eight years later, he fought back from the brink of defeat to win the GOP nomination, only to be overpowered by Obama. McCain chose a little-known Alaska governor as his running mate in that race, and helped turn Sarah Palin into a national political figure.

After losing to Obama in an electoral landslide, McCain returned to the Senate, determined not to be defined by a failed presidential campaign. And when Republicans took control of the Senate in 2015, McCain embraced his new job as chairman of the powerful Armed Services Committee, eager to play a big role “in defeating the forces of radical Islam that want to destroy America.”

Throughout his long tenure in Congress, McCain has played his role with trademark verve, at one hearing dismissing a protester by calling out, “Get out of here, you low-life scum.”

He tangled with McConnell over campaign finance, joined forces with Democrats on immigration and most recently had a very public spat with Sen. Rand Paul. McCain said the Kentucky Republican was working for Russian President Vladimir Putin after he blocked a vote on allowing Montenegro into NATO. Paul said McCain had gotten “unhinged.”

Early in the 2016 campaign, McCain largely held his tongue when Trump questioned his status as a war hero by saying: “He was a war hero because he was captured. I like people who weren’t captured.”

McCain stuck by Trump at times seemingly through gritted teeth — until the release a month before the election of a lewd audio in which Trump said he could kiss and grab women. Declaring that the breaking point, McCain withdrew his support and said he would write in “some good conservative Republican who’s qualified to be president.”

In an interview with The Associated Press in 2013, McCain spoke of his decades in Congress, legislative achievements and political defeats.

“The last thing I am is bitter and angry. ... I’ve had the most full life. I would compare my life to anybody that I’ve ever known and it’s been one of great good fortune and I’m grateful every day,” he said.

Doctors are preparing for a spike in Rohingya women giving birth amid claims many were subjected to sexual violence nine... Read More...

Doctors the world over are renowned for their bad handwriting, but now a Bangladesh court is seeking to ban the... Read More...