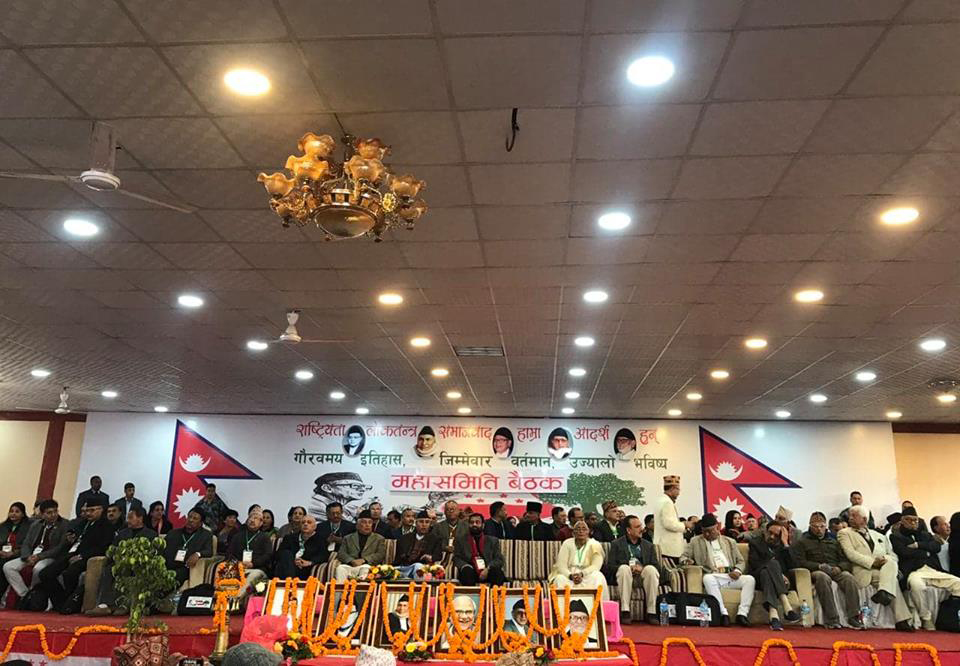 KATHMANDU, Dec 23: District chiefs of the Nepali Congress (NC) have demanded that central committee members of the party be barred from becoming general convention representatives unless they are elected by the party's local organizations.

In their feedback on the revised draft of the party statute during the ongoing Mahasamiti meeting in the capital Saturday, over a dozen party district committee chairpersons demanded to make it mandatory for central leaders to get elected from the local levels.

The district chiefs have argued that a proposed provision of automatically nominating central committee members as party general convention representatives would sever the relations between central leaders and local cadres.

“Most of the district chairpersons have demanded removal of the provision for nominating central committee members as general convention representatives, claiming that this will sever relations between the central and local leaders,” said Mahasamiti member Jhankarnarayan Shrestha.

Altogether 15 district chairpersons put forth their views on the revised draft statute on Saturday after it was tabled for discussions by drafting committee coordinator Purna Bahadur Khadka earlier in the day.

Although the Mahasamiti meeting was scheduled to conclude on December 18, differences between the establishment and rival factions over the number of office bearer positions and whether these should be elected directly from the general convention or nominated by the president prolonged the meeting .

NC spokesperson Biswaprakash Sharma said the meeting is most likely to conclude on Sunday. “We are eyeing a wrap up of the meeting on Sunday after endorsing the revised statute,” he said.

Amid the reluctance of the party establishment, the Central Working Committee meeting on Friday decided to increase the number of office bearers to 14, including an all-inclusive eight joint general-secretaries, revising the draft statute accordingly.

The revised statute has proposed a 168-member central committee. The NC has proposed eight tiers to the party organization, including ward, municipality, constituency, district, provincial and central tiers.

The Mahasamiti is the largest policy- making body of the NC. The party convened the Mahasamiti after a gap of six years and a year ahead of the next general convention. Some of the Mahasamiti representatives left Kathmandu after the meeting got prolonged .

Altogether 1,600 representatives were chosen to take part in the Mahasamiti from across the country and from party sister wings representing Nepali communities abroad.

KATHMANDU, Dec 21: A fresh dispute has begun in the main opposition Nepali Congress (NC) over the number of party's office... Read More...