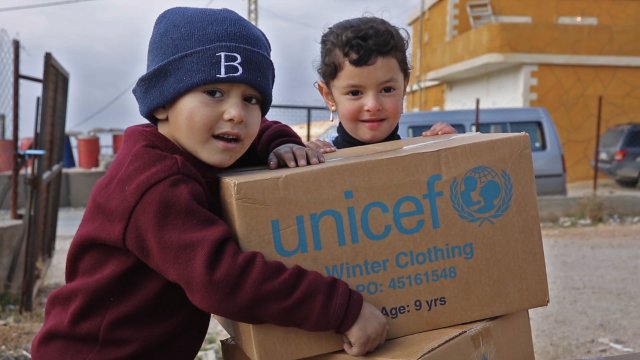 SYRIA, Jan 16: Freezing temperatures and the lack of medical care have killed at least 15 displaced Syrian children in recent weeks, the United Nations reported on Tuesday.

The UN Children's Fund (UNICEF) said eight of them had died as a result of the cold in the Rukban camp in southeastern Syria and seven others during the displacement from the jihadist bastion of Hajin, further north.

"In just one month, at least eight children - most of them under four months and the youngest only one hour old - have died," he said.

Cappelaere explained that the cold in the isolated desert camp on the Jordanian border, where 80 percent of the 45,000 residents are women and children, was increasing infant mortality.

The cold snap that has hit the region is also having dire consequences on people fleeing the fighting in the so-called Hajin pocket in eastern Syria.

The area near the Iraqi border has seen intense fighting between Islamic State group jihadists defending the last remnants of their "caliphate" and Kurdish-led forces backed by US air strikes.

According to the UN, more than 10,000 people have fled the area since December.

"Families seeking safety face difficulties leaving the conflict zone and wait in the cold for days without shelter or basic supplies," Cappelaere said.

"The dangerous and difficult journey has reportedly killed seven children -- most of them under one-year-old" in Hajin, he said.

According to the Kurdish-dominated Syrian Democratic Forces battling the jihadists and to the Syrian Observatory for Human Rights, significant numbers of IS members have attempted to blend in with fleeing civilians.

The United Nations, whose new special envoy Geir Pedersen was in Damascus on his first trip Tuesday, has consistently asked for improved humanitarian access in Syria.

Rukban has been particularly difficult to reach due to its sensitive location on the Jordanian border and the proximity of US forces and the rebels they support.

Emergency supplies were delivered in November in the first aid convoy to reach Rukban in 10 months.

The World Food Programme on Tuesday demanded a second such convoy be organised as soon as possible.

"The lives of babies continue to be cut short by health conditions that are preventable or treatable. There are no excuses for this in the 21st century," Cappelaere said.

"This tragic man-made loss of life must end now," he said.

They discussed "the necessity on working to ensure the return of Rukban residents to their cities and towns" after Jordanian-Russian-American coordination.

Residents in Rukban have however said they will not go back to areas under the control of President Bashar al-Assad's Russia-backed regime.

"We will not accept any reconciliation with Assad's regime under any circumstance," they said in a statement on Monday.

"We will not accept anything but the camp being transferred to northern Syria," they said, referring to areas of the war-torn country still under rebel control.

Severe weather has hit the region in recent weeks, including heavy and sustained rainfall that flooded displacement camps in Syria and in neighbouring countries.

According to the Britain-based Observatory, which relies on a network of sources in Syria, more than 360,000 people have been killed since the start of the war in 2011.

CHITWAN, Dec 8: On November 26, the students of six community schools of Icchakamana Rural Municipality-2 gathered on the premises... Read More...

46 dead, 16 hospitalized after trailer of migrants found
49 minutes ago
Stockbrokers permitted to operate their own TMS for online trading of shares
2 hours ago