Displaced Majhis back home after 3 decades 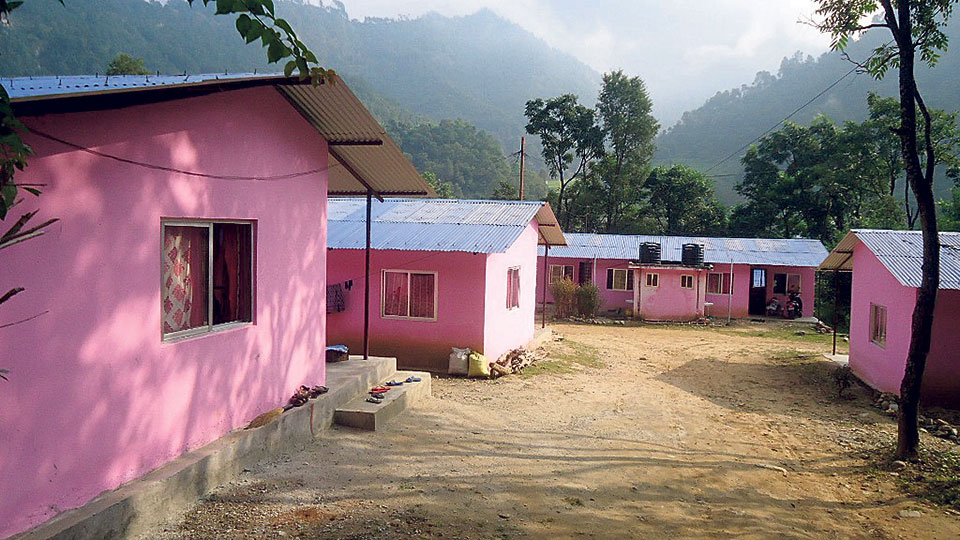 BAGLUNG, Oct 15: Fulmaya Majhi was never ever so much happy in her life as she is now. The local of Khaniyabass in Baglung Municipality is actually unable to express her joy in words. The woman in her 20s has a great reason to be so. Fulmaya is spending Dashain at her ancestral land for the first time. When her family got displaced from village, she was not even born.

“My family was displaced 30 years ago when I was not yet born. I grew up as a child of a displaced family. I would get to know something about my village only through my elders and I would wonder how it might feel like having my own house or village,” said Fulmaya. “I had no idea that this would however happen one day, though that was my utmost wish,” she added.

The Majhi community including the family of Fulmaya was displaced from their settlement due to the road expansion along Baglung-Pokhara. As the construction started, the community left their houses and started living at makeshift huts at Bagechaur a little far away. Even though they had been urging the government to arrange a better residence for them, the plea had fallen into deaf ears. After three decades, things have changed for them though.

“Our community suffered a lot after being displaced. We don’t have strong political connection, we don’t know leaders much, so our voice was not heard,” said Fulmaya.

Fulmaya stated that the authorities always gave them assurances, but never fulfilled them. Every Dashain, the Majhis would put on more pressure on the local authority, but to no avail.

“More than other times, you miss home in Dashain. So, even our community would pile pressure to get back to our homes in Dashain. But every time, we would fail to draw adequate attention,” reported Fulmaya.

However, this time, the dream has come true and Fulmaya is on cloud nine, just like all others in her community. They took no time in shifting us to a new house in the same old settlement. The community shifted to the new residence a few weeks ago.

“It is for the first time I am getting to know how it feels like being in your own house. You feel the ownership, you feel secured,” Fulmaya shared. “There are many others like me who were born and brought up in ‘the settlement of the displaced’. All of us are overjoyed now,” she added.

Even though the Majhis have received new houses, there are few things yet to be managed. The elders said that they could not wait till those issues were settled since they were living extremely difficult life in Bagechaur.

Taps, drainages and roads are yet to be fixed. Once those issues are addressed, the new Majhi settlement won’t be any less than other posh areas, they claim.

“We had not imagined that we would be provided with the residence and facilities. Once the few ongoing works are done, ours will be one of the most beautiful settlements,” noted Fulkumari.

Majhis are considered a marginalized group. Their livelihood basically depends on fishing and boating though this has changed a bit over the time. There are hardly any elder in the community who is educated though children these days go to school. According to Fulmaya, the biggest concern of the Majhis right now is that of land ownership and house certificates.

The new settlement is the result of an initiation of Baglung Municipality. After the government released budget for the project, the municipality handed over the responsibility to make the settlement to Muktinath Trishakti Builders Company in mid-2016. The company was supposed to build 14 houses for the Majhis, which has now been completed.

After being ‘happily shifted’ to new house, the Majhis are now looking for jobs. They have urged the government to provide them with jobs they can undertake.

“We worked near the riverbanks as laborers. Apart from that, we did fishing, boating. But the time is changing, such works are now scarce,” said Som Bahadur Majhi, 65. “Now, for the new generation, we look for different jobs,” he added.

Meanwhile, administrative officer at the municipality Yukti Prasad Subedi said that the Majhis did a little hurry in shifting to the new houses. Had they waited a little, a lot of other arrangements would have made their lives easier, he noted.

“They were having difficulty in living in tents, so they hurriedly came over there. They are elated to celebrate Dashain at their new houses,” Subedi said. “But we have not handed over the houses officially. We are going to do that by Tihar,” he added.

The houses were made at a cost of Rs 8.2 million. Though initially, the estimated cost was Rs 10.3 million, the construction company was ready to do it for less expense. The government provided 80 percent of the cost while the beneficiaries covered for 10 percent by contributing labor. The rest of the 10 percent was arranged through loans. “We have to pay off the loan that we took from bank,” Fulmaya said.

KATHMANDU, April 19: At a time when everyone is applauding Dhurmush-Suntali for their exemplary efforts for the construction of the... Read More...