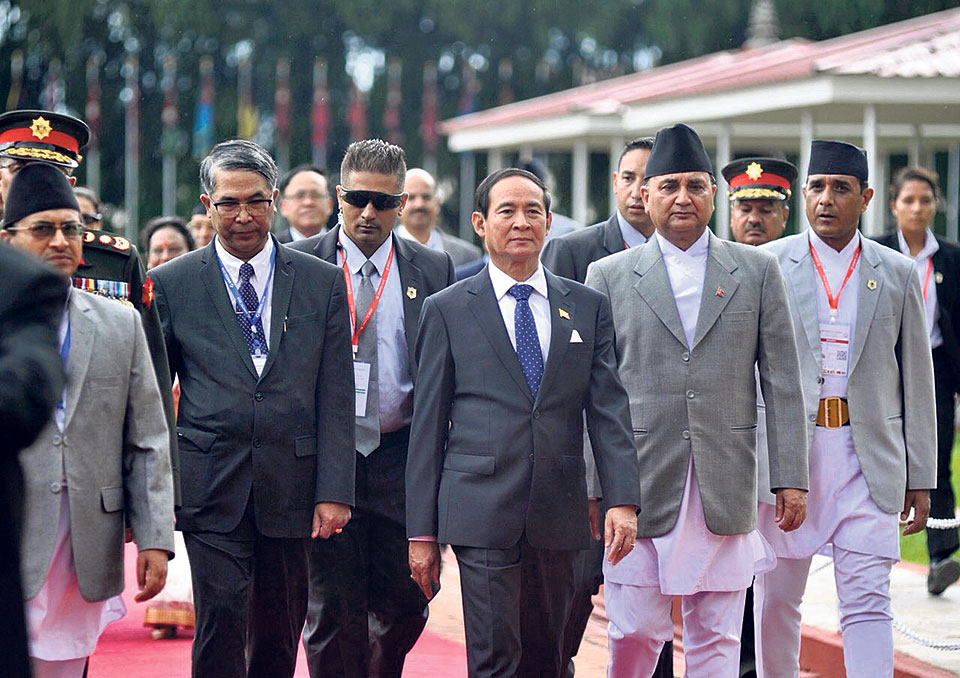 Myanmar's President Win Myint (center) arrives at the Tribhuvan International Airport on Tuesday to participate in the 4th BIMSTEC Summit in Kathmandu. The summit will be held on August 30-31. Photo: Keshab Thoker/Republica

President of Myanmar Win Myint arrived in Kathmandu on Tuesday for the 4th BIMSTEC Summit beginning in the capital on Thursday, while the heads of government of the remaining five countries are set to arrive on Wednesday and Thursday.

Deputy Prime Minister and Defense Minister Ishwar Pokharel received Myint and first lady Cho Cho at the Tribhuvan International Airport in the afternoon. Myint will visit Lumbini, the birthplace of Lord Buddha, in the morning and will call on President Bidya Bhandari at Shital Niwas and engage on Nepal-Myanmar bilateral meetings on Wednesday.

Meanwhile, a BIMSTEC ministerial meeting is scheduled for Wednesday to finalize the agreement papers and declaration of the fourth BIMSTEC Summit. Ministers of the BIMSTEC countries arrived in Kathmandu Tuesday for the meeting. Foreign ministers from India and Sir Lanka will represent the meeting while ministers from Bangladesh, Thailand, Myanmar and Bhutan will take part in the meeting.

Foreign secretaries of the BIMSTEC member states arrived on Monday evening in Kathmandu for senior officials meeting held on Tuesday.

KATHMANDU, Aug 30: Are you planning a trip to the downtown areas for shopping or other tasks on Thursday? If yes,... Read More...

Kathmandu all ready for BIMSTEC

KATHMANDU, Aug 29: With the BIMSTEC summit all set to start Thursday in Kathmandu, the government is ready to welcome the... Read More...

Availability of animal carcasses attracting vultures to Tanahun
3 minutes ago

Constitution and political system will not be reviewed: PM Dahal
58 minutes ago