Diamond and APF to vie for title 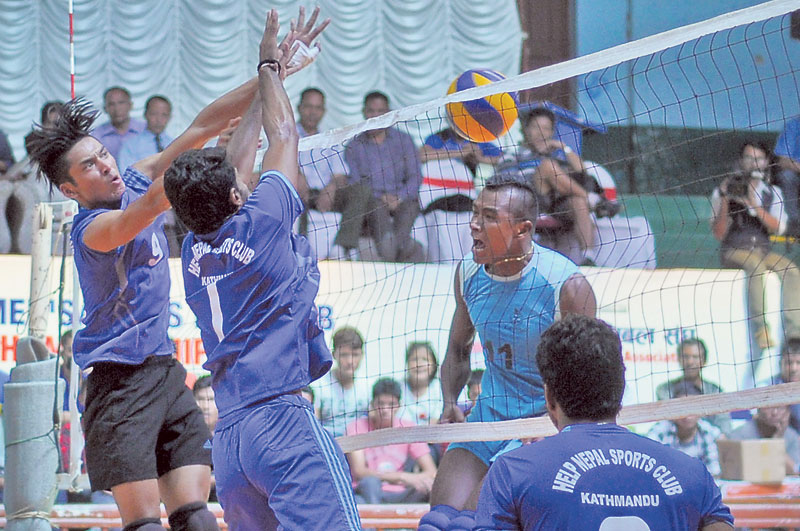 KATHMANDU, Sept 18: New Diamond Academy of Naikap and APF are two strong teams of the domestic women's volleyball and they often meet in final of the national tournaments.

Both teams have claimed themselves as the number one team. APF has defeated in the most of the games held in Kathmandu. However Diamond had beaten APF in Lamachaur, Pokhara.

Analyzing the past results, the courts of Kathmandu have been lucky for APF but Diamond defeated departmental team in Kathmandu on Sunday in the semifinal game of the 3rd NVA Cup National Women's and Men's Volleyball Tournament. Diamond will now vie against another departmental team Nepal Police Club in the final on Monday.

In the match held at National Sports Council (NSC)'s covered hall, Tripureshwar, Diamond overcame APF in the straight sets of 25-22, 25-22, 25-23. This was the second win Diamond clinched against APF within 14 days. Diamond had defeated APF in the tournament held in Pokhara.

Saraswati Chaudhary scored 14 points for APF while Usha Bista contributed 11 points for the losing side.

Diamond's coach Kumar Rai expressed his happiness over the performance of the players. “Our target is to be number one team in domestic volleyball. Today we proved that we are good enough to match our target. We had trained hard to deliver such result.

We defeated APF due to the hard work of players,” said Rai.

APF's main spiker Saraswati Chaudhary was not in the team when departmental team faced defeat to Diamond in Pokhara. But Saraswati who was in team today after arriving from Japan training couldn't make any difference.

APF's coach Sudesh Rimal said that his team performed poorly in all positions except blocking. “When senior players made errors we lost the game control. None player's performance was satisfactory. Opponent played their natural game,” said Rimal.

In another semifinal match, Police defeated Tops School of Western Region with the straight sets of 27-25, 25-21, 25-16. Western Region was very close to win the first set as it had developed the lead of 25-15 but failed to win. After losing the first set, Western Region couldn't give tough competition in the rest of the game. Former spiker of national team, Ramila Tandukar was playing for the Western Region but couldn't stop her team from facing defeat.

Similarly in the men's section of the tournament, Help Nepal Sports Club and Tribhuvan Army are set to vie for the title. Army had defeated Help Nepal 3-1 in the group stage match. Since then, Help Nepal performed strongly and booked its place in the final. Four Indian players including two national players of South Asian powerhouse are playing for the Help Nepal.
Finalist Help Nepal registered easy victory over departmental team APF. Subhe Singh scored highest 17 points for Help Nepal while another Indian player Subhan Chaudhary contributed 12 points. Milan Malla made seven points from spike for APF.

Arun Shrestha, Manager of Help Nepal said that his team is focused on playing beautiful volleyball rather than just for win. “Our primary target was to qualify for league which we have already achieved. Now we will try to play beautiful volleyball for all the Nepali volleyball lovers,” said Shrestha.