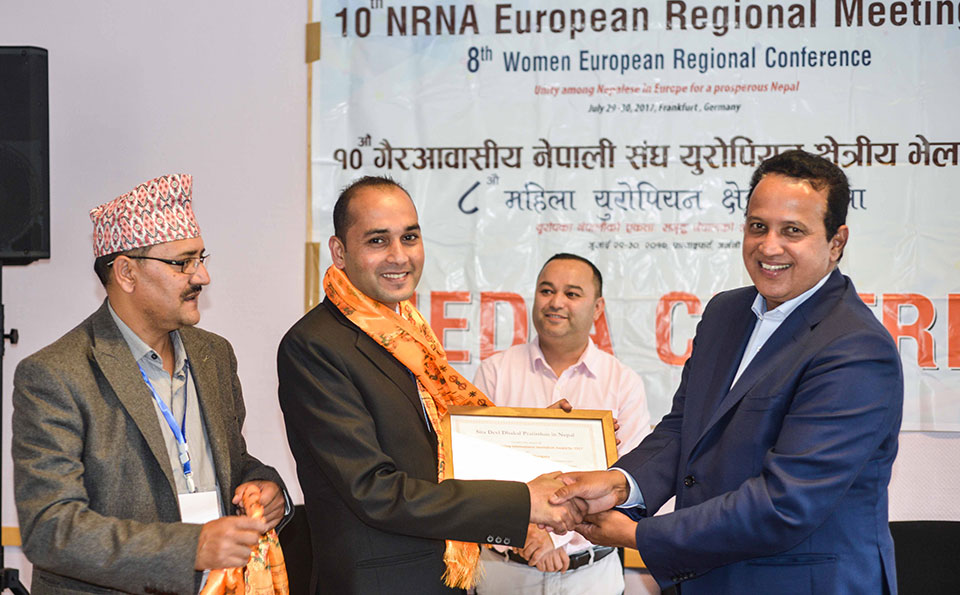 Former President of Non Resident Nepali Association (NRNA) Jiba Lamichhane handed over the coveted award to Dhungana at a program organized in the southern German City Frankfurt on Friday.

Speaking at the program, Chirinjibi Dhakal, chairman of Sitadevi Dhakal Memorial Academy, said the award was established with a view to encouraging digital journalists.

Speaking at the program after receiving the prize, Dhungana said there is no alternative to digital journalism to keep people informed in a large scale.

“Digital journalism does not seem to be as effective as print or electronic media but there is no alternative to it when it comes to disseminating news to wider mass of people,” said Dhungana.

Dhungana further said online journalism has a significant role to instantly update the generation who still depend on radio for news.

Meanwhile, he stressed caution while doing digital journalism to maintain credibility and authenticity in the news.

A panel led by BBC Nepali Journalist Bhagirath Yogi had decided to award Dhungana in March 2017.

Dhungana, who started his digital journalism career from www.parewa.com 10 years ago, is currently news coordinator of www.nagariknews.com.

KATHMANDU, Aug 21: Binod Chaudhary, the President of Chaudhary Group (CG), has been honored with 'Asian Man of the Year' award. Read More...

One in five Chinese Australians report attacks or threats amid pandemic, rising tensions
18 minutes ago
Rampant exploitation of sand, pebbles and stones in Kaligandaki continues unabated
23 minutes ago