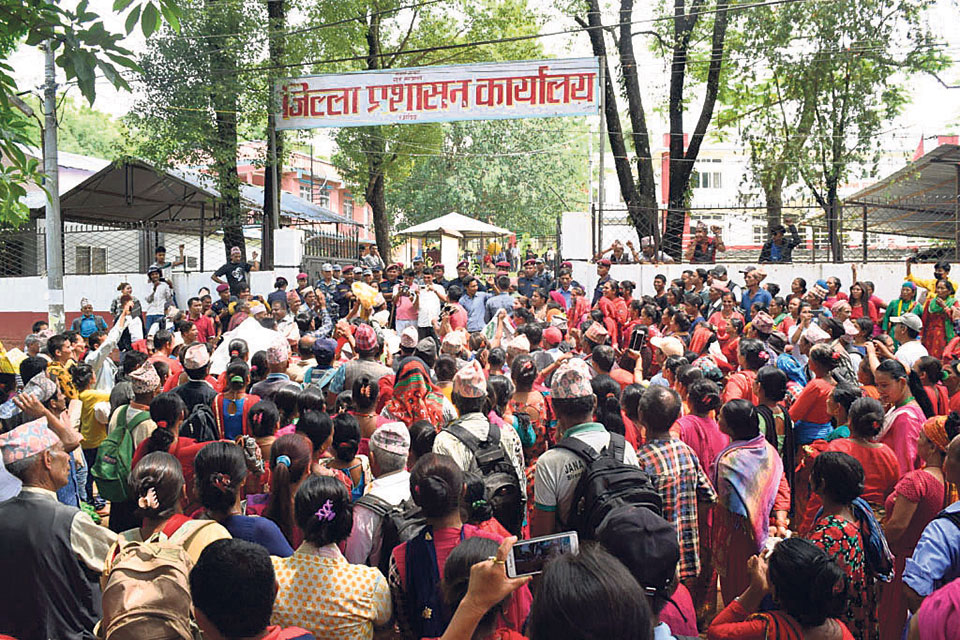 Farmers in Dhading stage demonstration at the gate of the District Administration Office on Sunday to protest a shortage of chemical fertilizers. Over 600 farmers demanded that the agriculture minister resign.  Farmers said they have not been able to buy fertilizers since the past three weeks. They said they fear crop failure due to the shortage. Photo: Sarita Shrestha/Republica

DHADING, June 3: More than 600 enraged farmers staged a protest in front of the District Administration Office after facing an acute shortage of fertilizers.

The farmers who had gathered at Nilkantha Cooperative on Sunday to collect the fertilizers picketed the DAO after they were not provided the fertilizers. They also demanded the resignation of agriculture minister.

One of the locals of Nilkantha Municipality, Saraswati Dhakal, complained about her futile attempts of growing vegetables without fertilizer.

“We have been visiting Dhadingbesi for the past three weeks but have not received fertilizers so far. It's no use when we don't get fertilizers when we require them the most. It's time to harvest maize but we are yet to get the fertilizers,” said Dhakal.

“If we fail to get fertilizer at times of need, the crops would not bear fruit. It means we could die of starvation,” she added.

Although the farmers are actively engage in cultivation, the district is often hit by shortage of fertilizer. The farmers visit the district headquarters with sacks in hope of collecting fertilizers but have been returning empty-handed since a few weeks.  The local authorities say it is getting difficult to handle the crowd of farmers at Nilkantha Cooperative Organization day by day.

“The supply of fertilizer hardly meets the demand of the farmers,” said Balram Shrestha, chairperson of the cooperative.

Keeping these issues in mind, Chief District Officer Baghirathi Panday has requested the Salt Trading Cooperation to send the required amount of fertilizers to the district.

BIRANAGAR, Aug 1: Rampyar Yadav, a seasoned farmer from Jahada village of Morang, has no memory of a single year when... Read More...

Farmers in far west worried due to shortage of fertilizers

KAILALI, Dec 22: Farmers in far-western Nepal are worried that their winter crops will be affected due to a shortage... Read More...

NGO operators in Kathmandu deny embezzlement of UK donation meant for treatment of street dogs, claim that they are not local board of KAT UK
11 hours ago

16 DIGs including all provincial police chiefs transferred
34 minutes ago

Integrated policy to be introduced for Raute Community
23 hours ago