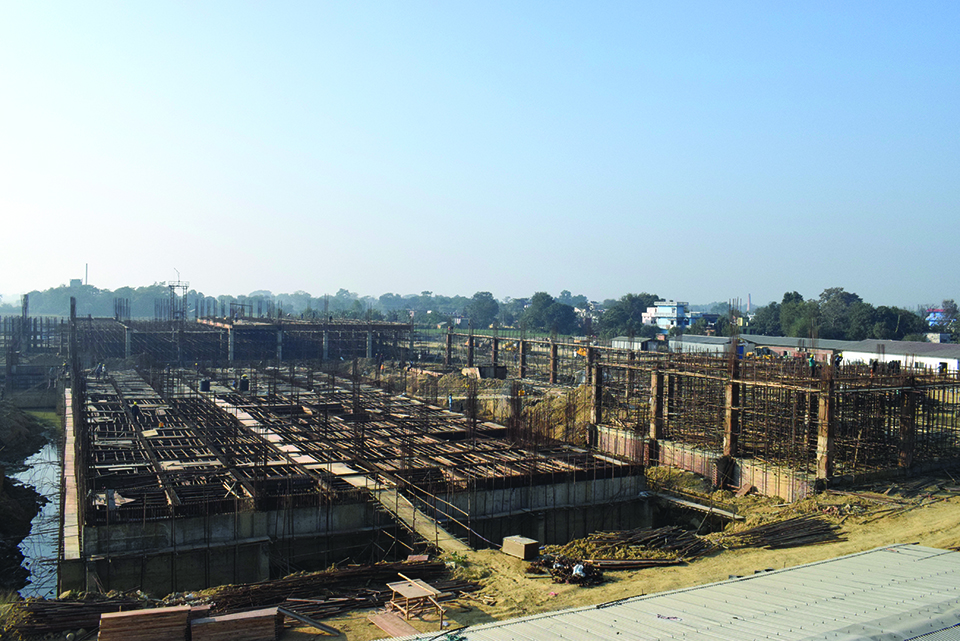 Construction of Belahiya-Butwal six-loan road has not completed even though it has already been six years since the work commenced. Kalika-Tamang-Pacific JV had bagged the contract to build two sections of the six-lane road - Danda-Bhairahawa section (700 meters) and Barmeli Tol-Anchalpur (1.4 km) in 2014. The construction company has already extended project completion deadline four times. But it is still unknown when the project will be completed.

In the initial years, the company said the delay in replacing electricity poles was affecting the project. Later, they found excuses in Madhes unrest and Indian blockade, project engineers say.

The project was to be completed in 2016. However, the company sought an extension of 120 days in 2016. It later extended the completion deadline by 84 days. The company managed to get the third extension of 182 days. In 2017, it managed to extend the project completion deadline by 110 days. The project has already missed its fourth deadline.
Project officials are now planning to make the company pay fine for not completing the project on time. “This time we will extend the deadline, slapping certain fine as compensation,” Yogendra Adhikari, engineer of the road project, told Republica.

Gautam Buddha International Airport Project has also suffered from the negligence of contracting company. As per the agreement signed with the Civil Aviation Authority of Nepal, the contractor had to complete the project by December 2017. But since it didn't happen, the completion deadline for the national pride project has been extended by six months until June.

According to Om Sharma, project chief of Gautam Buddha International Airport Project, only 35 percent of work has been completed so far.

Project officials say that the project is getting delayed due to the carelessness of the Chinese contractor -- Northwest Civil Aviation Airport Construction.

The Chinese contractor had succeeded to extend the completion deadline, citing factors like the 2015 earthquakes, Indian blockade and lack of construction materials.  The project, however, is unlikely to meet the new deadline.
“The extended period is not sufficient to complete the work on time. The project will certainly seek another deadline extension,” Sharma said.

According to project officers, the contractor must achieve six percent progress every month to meet the deadline. But their current work progress stands at dismal 0.5 percent per month. However, it has expedited work by hiring more skilled manpower after receiving a threat from the government to terminate the contract.

Last year, construction came to a halt for nearly six months due to differences between the Chinese contractor and its Nepali associate company Northwest Nepal Infra Pvt Ltd. “The project is making some progress after the problem between the contractor and its associate was resolved. However, it is not sufficient,” Sharma told Republica.
All the works of the runway, graveling, terminal building, administration building, control power and other works are at snail's pace.

Likewise, an office building for District Administration Office, Palpa, still remains incomplete even though it has already been four years since construction began. The construction work began in 2014, setting a target to complete it by 2016. The contractor has already extended construction deadline two times. Like other projects, the project has also suffered from the negligence of the contractor.

“Nearly 90 percent of the work has been completed so far. However, the contractor has applied for another extension in the completion deadline,” said Bishnu Prashad Dhakal, CDO of Palpa, said.

KATHMANDU, May 16: Carrying out mega projects without the approval of the  Environment Impact Assessment (EIA) report or in breach... Read More...

KATHMANDU, Feb 27: One of Nepal's important development partners has asked the government to stop politicization in development activities. ... Read More...