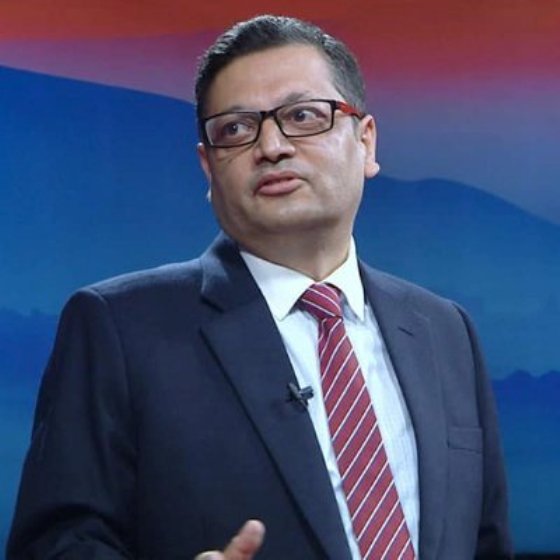 Dr Nishchal N Pandey is the Director of the Center for South Asian Studies, a Kathmandu-based think-tank. Previously, he served as the Executive Director of the Institute of Foreign Affairs (IFA) under the Ministry of Foreign Affairs. Dr Pandey was also an International Research committee member of the Regional Center for Strategic Studies (RCSS), Colombo. He keeps a close tab on the developments that pertain to the South Asian region and their implications for Nepal. As Prime Minister Sher Bahadur Deuba is leaving for New Delhi on a three-day official visit to India on Friday, Republica's Kosh Raj Koirala sat with him to understand the significance of the visit and the priorities and concerns Nepal should raise. Excerpts:

Prime Minister Sher Bahadur Deuba is no stranger in India. I was part of his delegation back in February 1996 when he visited at the invitation of Prime Minister PV Narasimha Rao. The trade treaty signed at the time was a turning point in our economic relations. I recall that PM Deuba had taken with him the prasad (chandan) of the Pashupatinath temple to PM Rao and he was visibly very happy to receive it from PM Deuba. Therefore, it is important to build personal rapport and chemistry with the leadership of India, especially the current one which has a comfortable majority in the Indian parliament.

Current PM Narendra Modi has already seen six changes in government in Nepal since he came to power in India in 2014. Recently we saw the BJP winning Uttar Pradesh and Uttarakhand states also- two vitally important neighboring states in their state elections. This makes Chief Minister Yogi Adityanath the only reigning chief minister of UP in 70 years to complete the tenure and win for the second time in a row. Since Deuba will be visiting Varanasi in Uttar Pradesh, I hope he is able to re-connect our traditional cultural, religious relations with the city (known as Kashi in ancient times). The Samrajeswor Pashupatinath Mahadev temple was built by King Rana Bahadur Shah and at the time, the King of Kashi had handed the land over to Nepal in 1843. The Nepal government appoints the head priest of that temple, which is another unique feature of our bilateral relations.

Let me also underscore that Banaras Hindu University (BHU) has a Center for Nepal Studies, the only such center in India. The visit, although a short one, needs to affirm the significance of such study centers devoted to Nepal in India so that there is better understanding about Nepal among the younger generation of Indians. If you see the Joint Statement issued between India and Republic of Korea in May 2015, there is a mention of enhancing the connection of the Korean people with the holy city of Ayodhya. We too have such ties between Ayodhya and Janakpur but the progress to connect the two cities through a Ram-Janaki Marg has not taken off. Whereas countries from other regions are eager to capitalize on the religious and cultural affinity with India, we in Nepal have been shy, which is quite strange. Modi is a powerful Prime Minister and Deuba is an experienced Prime Minister. Their personal chemistry is what I will watch for during the visit.

What should be Nepal’s agenda for the visit? What are the areas of cooperation in which Nepal and India can work further to enhance their bilateral relations?

We usually go with a long shopping list when visiting abroad. We need to find out whether what we desire is available or not. We also generally raise the people’s expectations prior to the visit. When the visit falls short, there is no dearth of those that criticize and state that the visit was not a success. Besides, this is an election year here in Nepal. Local polls are due in a month’s time. Nepal needs to stress the expeditious implementation of bilateral projects and reinvigorate the already existing bilateral mechanisms across diverse spheres rather than forming new committees and groups.

I feel the visit of Prime Minister Deuba needs to add new economic dynamism in the context of COVID pandemic and add energy to our multifaceted partnership. While thanking India for its help with vaccines and repatriation of stranded Nepalis, we must also ensure that India is aware of the miserable condition of our tourism industry at the moment. The importance of enhanced air connectivity to promote people-to-people contact, tourism and trade can hardly be debated. We have just opened Kathmandu-Mumbai flights after a long closure. Pre-COVID, there were more cities in China connected directly to Nepal than Indian cities. Only Delhi, Mumbai, Bengaluru and Kolkata are connected directly to Kathmandu. The flight to Varanasi is irregular. The entire South India is not connected with Nepal. Full operationalization of the newly-constructed Bhairahawa and Pokhara international airports will depend on how quickly foreign airlines will begin operating in these airports and in this, the Indian government and private sector support will be crucial.

The other important issue is rail connectivity which has seen a lot of hype but more concrete work needs to be done on the ground. In 1927, the Janakpur-Jaynagar railway line and train service was made operational during the era of PM Chandra Shumsher and Nepal has had no other railway line since. The vast nature of our bilateral cooperation cannot be covered from a single, short visit but what needs to be done from our side is stress quick implementation of the past agreements.

The border dispute in Kalapani region in western Nepal has been one of the main irritants in our bilateral relations lately. There seems to be a consensus among strategic communities both in Nepal and India that this issue should not be left to fester any further. How do you think the issue of outstanding border disputes should be resolved?

Border problems are always with neighbors. Nepal will not have a border problem with Congo or Cameroon. There is a Foreign Secretaries level mechanism which has been stalled. Our political and diplomatic efforts have not been adequate to reinvigorate these official mechanisms with both our neighbors. With China, our border problem was resolved back in 1960 whereas with India, there is no issue on 90 percent of the border. In the remaining areas of Kalapani and Susta, these lower level officials need to meet. With China too, this mechanism has not met for a decade. Instead of making a controversy out of border issues, we need to understand that the emerging world dis-order is turning out to be nasty for smaller states. We need to try and build trust with neighbors and try to take care of their genuine security-related sensitivities. We must also stress more track-II level dialogues and discussions which will bring in the necessary synergy in our bilateral ties.

The recent invasion of Ukraine by Russia appears to be fast changing the reality of the existing international order. This has had significant implications for South Asia as well. What do you think Nepal should do to offset its negative implications?

I am sure the two Prime Ministers and also during Deuba’s meetings with the National Security Advisor and ministers, there will be an exchange of views on the current political, economic and security situation in our region and beyond due to the Russian invasion of Ukraine. There is a grave concern on the ramification that this will have on energy security and rising prices. In addition, the Indian side may want to hear about Nepal deploring Russia in the UN general assembly and choosing to be strikingly distinct in comparison to both India and China who abstained. It is in this context that we need to also stress as the current chair for an early SAARC Summit. We have an obligation to other SAARC members to keep emphasizing on the SAARC Summit and to deepen various regional and sub-regional cooperation mechanisms. Since 2014 Nepal has been continuing as the chair of SAARC which is unprecedented in the history of the organization.