Despite spending millions on fixing its drainage system, Nepalgunj inundated by sewage 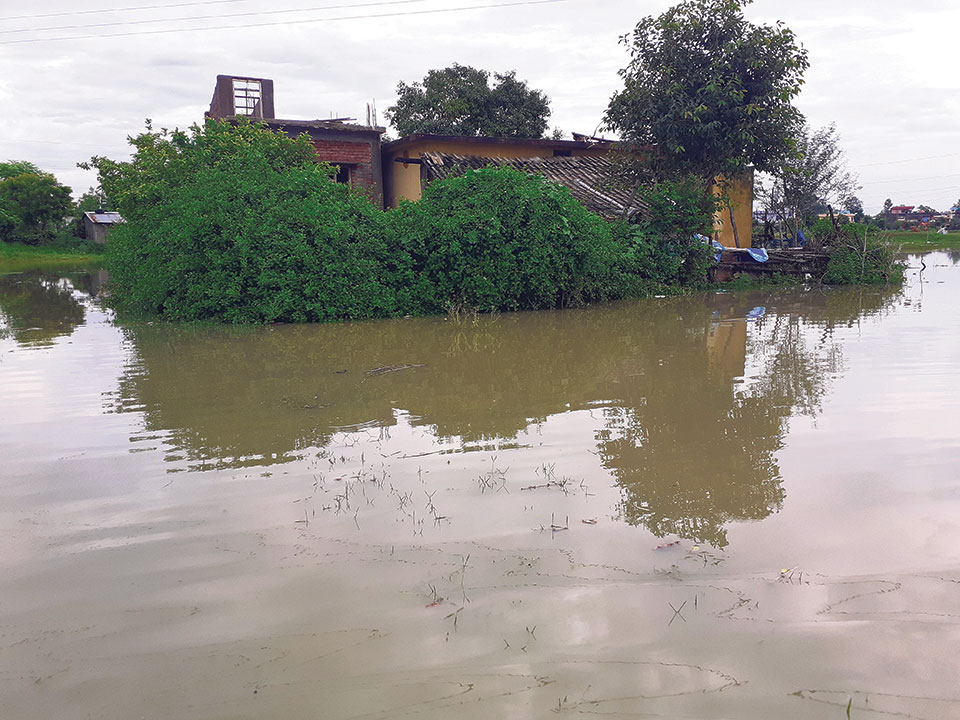 A house in Nepalgunj Metropolitan City is seen inundated by flood in this recent picture. Photo: Arjun Oli/Republica

NEPALGUNJ, July 10: Several wards of the Nepalgunj Sub-metropolitan City have been inundated because of its dysfunctional sewerage system and heavy rainfall in the recent days.

Floods mixed with the sewage from the drain pipes have filled main areas of the sub-metropolis like Dhambojhi, Besalpur, New Road, Ganeshpur, Koreanpur, Sadarline, among others. At some places, the filthy water flooded human settlements almost knee deep on Tuesday. The stink from this has made it unbearable for the residents.

“The whole town is in a filthy mess. All you can see and feel around is filthy water and stench,” said a local of the sub-metropolis Gagan Thapa. “It has happened due to the poorly-constructed drainage system.”

A sewer that passes through Newraod to Bageshwori to Sadarline built by the sub-metro with the support of the Asian Development Bank (ADB) two years ago has caught the attention of locals. Thapa said that the sewage system built by investing millions of rupees has been ineffective. “What is the purpose of investing so much money to build a sewage system that does not work? Because it is dysfunctional, our settlement is waterlogged with sewage,” he said.

Locals accuse the concerned authorities of building the sewage system without following even the basics of engineering.

“The drainage system does not seem to be properly engineered. It goes through so many bends that it is not able to carry the drain the sewage,” said another local Shankar Thakuri. “As the sewer is not able to pass through, the sewage has entered human settlements.”

Though residents are having a hard time dealing with the filth, the sub-metropolis has not taken any concrete steps to open the blocked sewage, locals accused.

“Roads are flooded with the filth. It’s not possible to detect if there are any open utility holes. What will happen if children or elderlies fall into them? Who will take responsibility if anything wrong happens?” Thakuri fumed. “We expected that the sub-metropolis would respond to the situation immediately and solve the problem, but they don’t care.”

Locals around Rani Talau Mahendra School Raod, Mahendra Park area, Gharbari Tole, Ganeshpur, Bhirkutinagar and Bankegaun also reported that they were also dealing with such crisis and that the sub-metropolis has not responded to their call for assistance. Not only roads but the filthy water have inundated many homes as well.

However, Mayor of the city, Dr Dhawal Shumsher Rana, asserted that the floods will clear out soon.

“Unlike in the past, water does not remain in the settlements or roads for long. There are passages to drain it out,” Rana claimed. He said that it is natural for the rainwater to take some time to drain.

A local journalist, Hemanta Karmachayra, has written on his Facebook wall about the scenario. “At a glance, it looks like the ADB’s road and drainage have changed the face of Nepalgunj. But stay for an hour around, and you will be dejected. You will see the movement of people coming to a halt due to inundation,” he writes.

For around a decade, the government has worked on implementing integrated urban development project in the sub-metro with financial support from ADB. Some years earlier, the government also implemented the Regional Urban Development Project in the sub-metro in partnership with ADB. However, locals claim despite massive investments into the city’s drainage system they are yet to get relief from the flooding.

As per the government data, around five billion rupees have already been invested jointly in both of these projects.

“Millions and billions of rupees have been spent in the name of improving the city’s drainage, sewer, and garbage management. But if you look at the results, they are very dismal,” said a central member of FNCCI, Krishna Prasad Shrestha. “People are forced to live in filth. When it rains, the whole city is inundated with filth and sewer.”

Though the sub-metro is implementing multiple projects related to cleanliness and sanitation and are expected to run till August of 2020, people are not hopeful that they will deliver tangible results. “When they have not been able to address simple things despite spending so much time and money, how can you hope that they will get it right in the days ahead?” questioned Thakuri.

Apart from the ‘poorly built drainage system’, locals claim that encroachment of roads and drainage has been adding to the woes. They said that infrastructures built around roads and drain should be immediately removed.

According to Shrestha, just finishing the budget in the name of development does not bring real progress. “It has to be very sensible and sustainable. If needed, the authority must be able to take strong action, or else things are not going to improve,” he maintained.

Quake-hit monuments on the verge of collapse due to rainfall