Delay in reconstruction of classrooms affecting children’s education in Sindhuli 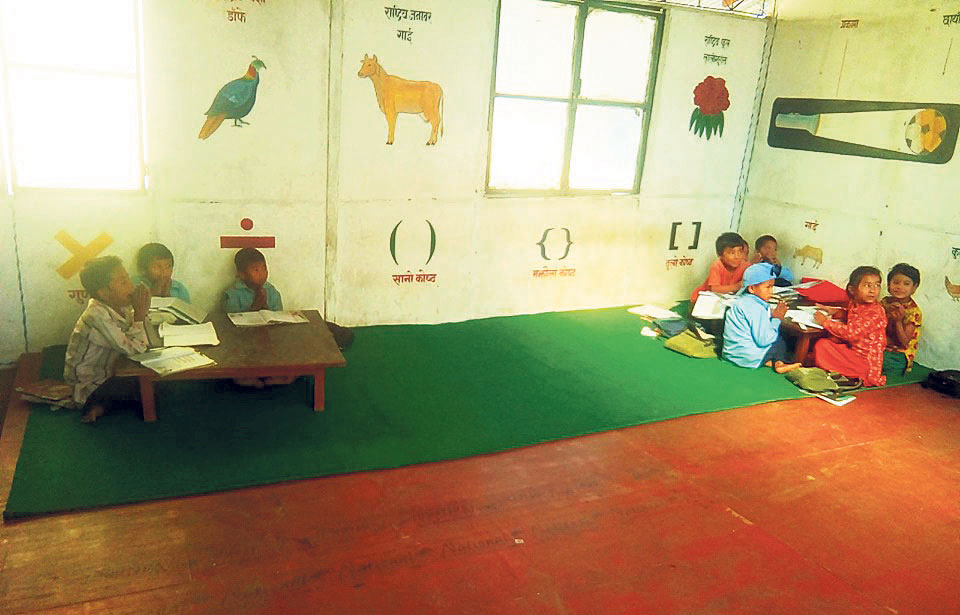 Children sit on a wooden floor inside a classroom of Pratapbhanjyang Primary School, Kamala Municipality – 3, Sindhuli in this recent picture. Photo:Anil Bhandari/Republica

SINDHULI, Nov 27: Kumar Chaulagain, teacher of Pratapbhanjyang Primary School of Kamala Municipality – 3, finds it very difficult to handle his classes. When he goes in to teach the forth graders, the third graders come around curiously and make noise. And when he is busy teaching the third graders, fourth graders trouble him the same way.

The problem is, both the graders have been kept in the same classroom. “In lack of classrooms, we have been managing classes by merging them into one. But it is very difficult to handle them,” he laments.

The school which runs classes up to fifth has been managing even other classes the same way. Students of different graders are squeezed in the same classroom and make it very hard for the students as well as the teachers to engage in academic activities.

“When students are not provided with a proper classroom, it is hard for them as well to engage in academic activities. It is school’s weakness and in lack of resources there is nothing we can do about it,” remarks Chaulagain.

The school does not have desks and benches either. The students sit on the classroom floor and keep their stationeries, books and notebooks on a table.

The school had lost its building to the devastating earthquake of 2015. For several, it remained closed. It resumed classes after the school administration managed makeshift cottage. However, that did not work for long either.

“After the earthquake, we could not continue. The school remained closed for many months. And that quite hampered children’s studies,” reported Chaulagain. “And later, a makeshift building was managed, but that too did not work for long,” he added.

Even though the government announced that it would invest for expediting reconstruction of essential infrastructures like schools, the reconstruction process has not come to an end.

Fourteen different districts including Gorkha (Barpak was the epicenter of the earthquake), Sindhuli, Rasuwa and Kathmandu were the worst hit. Thousands of schools, hospitals, police posts and so on were turned to rubbles. The slow pace of reconstruction has hit many sectors, and children are among the most hit as a lot of school buildings have not been rebuilt.

“Our school is a case in point. There are many such schools in the district which are managing just like us,” Chaulagain said.

The National Reconstruction Authority (NRA) started building classrooms for this school last year. So far, two rooms have been built and the children have to share those rooms. Chaulagain stated that the school does not know by when all the classrooms will be built.

“We are trying to make it smoother so that children are not affected for longer. There are many schools where children’s number is too low. If such schools could be merged, then fewer buildings would do for those schools,” he said.

He added that schools should be shifted rather to those areas where there are transportation facilities. In the lack of roads, it is getting challenging to finish the construction work on time, he stated.

The lack of construction materials was also cited as a reason behind slow reconstruction. Similarly, reports also highlighted the need of more technicians and workers. The government had then appealed citizens to get required training so that they could get the work. However, this lured quite a few people.

According to the NRA, over 70 percent of the reconstruction work has been completed so far. However, for the students and teachers of the schools like Pratapbhanjyang Primary School, the news does not bring any smile.

The kids have to go through many ordeals everyday to acquire education. And the teachers are forced to take the pain of enduring all the hassles.

“Our school has a total of 47 students from all the grades. But we are squeezing them in the same room like sheep and teaching them something which they hardly understand due to the congestion in the classroom,” Chaulagain said.

“We try to engage one group with class work while attending the other group. And vice versa. But since out attention is divided, they fail to follow our instructions,” he added.

Chaulagain further claimed schools in his own days had far facilities then the school children today are attending. And that is very unfortunate, he said. Instead of getting modern facilities and working with updated technologies, they are hardly getting even mediocre resources.

“Children are the future of our nation, but look at the situation of the schools,” he lamented. He added that the internal resource of the schools is not enough to build new set of classrooms.

Reconstruction of government buildings in the final stage

Gorkha gets back school buildings damaged by 2015 earthquake