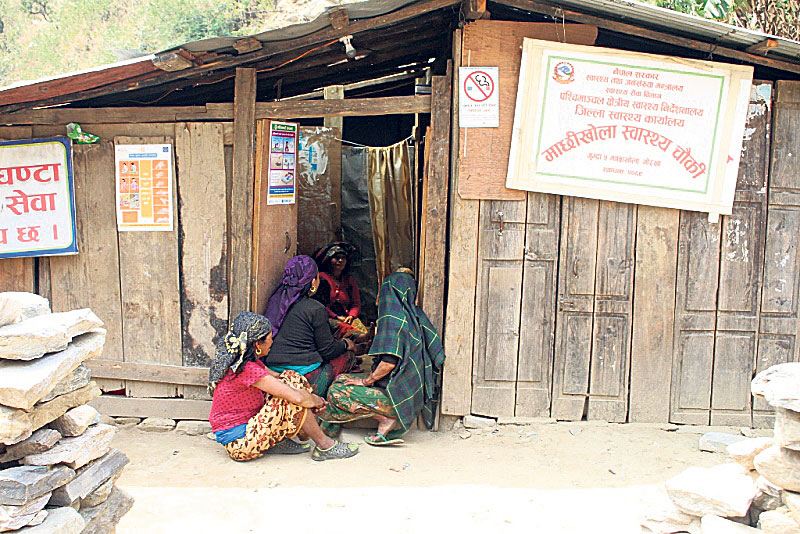 The health post at Machhakhola VDC in northern Gorkha is being run in a shed.(Narahari Sapkota /Republica)

Eight district-based NGOs and INGOs had taken on the responsibility of reconstructing as many as 51 medical facilities that were either damaged or destroyed by earthquake, using prefab structures. These organizations, however, have failed to ensure timely delivery of the works. IMC is constructing seven buildings and Save the Children eight, it was informed. But none of these have been completed.

NGOs and INGOs signed Memorandums of Understanding (MoU) with the Ministry of Health for the construction of medical facilities, Mahendra Dhwaj Adhikari, chief of the District Health Office (DHO) said, adding that reconstruction work has been completed so far on only nine of these facilities.

The reconstruction of 17 of the facilities has not even started, he said. “I/NGOs have informed us that the reconstructions of 25 health institutions is underway, but it is not clear when the work will be completed,” he added.

“These organizations had promised to complete all the construction work by the end of July,” Adhikari said. “They have apparently failed to meet their commitments on time.”

UNICEF is at the top of the list of organisations involved. It has promised to construct health post buildings at various places including Barpak, the epicenter of the big earthquake. Similarly, it made a commitment to construct health post buildings at Laprak, Machha Khola, Bakrang, Taklung, Namjung, Darbung, Chhoprak, Fujel, Deurali, Gumda and Borlang. But it has not started the construction work even after a year.

Similarly, PHASE Nepal, an NGO which has taken responsibility for the reconstruction of health post buildings at Keraunja and Kasigaun, has failed to start the construction work so far.

They have repeatedly asked the NGOs and INGOs to complete their work at the earliest, he said. “Health posts have been facing problems even with the storage of drugs,” he said.

Madhav Dhakal, district coordinator of Care Nepal who is also a member of the District Disaster Relief Committee, said that the delay in construction was due to unavailability of construction materials. Problems of transportation due to difficult topography have also contributed to the delay, he said.

Public discontent has increased over the delayed construction work, Chief District Officer Narayan Bhatta told Republica. “We expect that all the I/NGOs will hold public hearings to let the people know about any progress being made and to ensure transparency.”

GORKHA, July 31: The pace of work of the NGOs and INGOs working for reconstruction in Gorkha district, the epicenter of... Read More...

SARLAHI, July 17: Residents of Hajariya of Barahathawa Municipality-1 of Sarlahi district are worried about being displaced as the Bagmati... Read More...