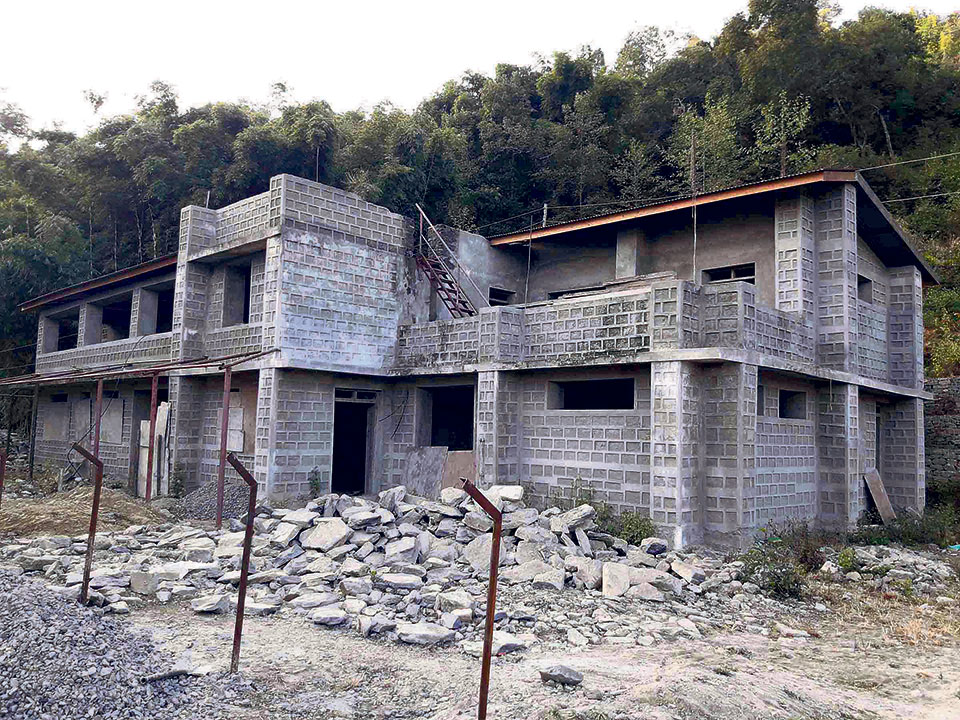 KHOTANG, Jan 31: Bhupendra Rai, chairperson of Chuichumma Rural Municipality - 1 has faced many problems in life. Most of them are related to his visits to health centers. During emergencies, Khotang locals never had access to health facilities on time, he reminisces. Over the years, health posts opened up in villages and relieved the residents. However, these health posts have not been able to cater to the need of the people adequately. “For serious illnesses, we still have to rush to hospitals in faraway cities,” he notes. Let alone major illnesses, these days a health post in Yamkha village is not even providing basic health services.

“The health post has not been providing services to the locals fully because of the ongoing construction of its building. The construction has been going on for a long time,” lamented Rai. “As such this has been causing great inconvenience to the service seekers.”

The health post also operates a birthing center. But in lack of infrastructure, it is barely operating. This has put new mother and babies’ life to risk.

“Had the construction of the hospital’s building been completed on time, the birthing center could have been able to work efficiently. Since it does not have the required infrastructure, how can the hospital provide services to  pregnant women?” Rai wondered.

Though the health center has been operating for many years now, its building was badly damaged by the Gorkha Earthquake in 2015. Since then, its officials have been providing health services from a makeshift house. They have demanded proper infrastructure to provide quality services.

“The demand was for a suitable infrastructure to be built for the health post and it was even decided that it would be completed by the beginning of 2018. But then, a year has already passed and the building has not been finished yet,” said Rai.

During the local level election as well, the locals of Yamkha village had forwarded construction of the health post building as their major demand to the candidates. Even though the government provides several types of medicines for free, in lack of proper infrastructure and mechanism, the locals have been deprived of such facilities.

“For instance, people rush to the health post seeking treatment for common illnesses like fever, diarrhea, dysentery, injuries. After receiving primary treatment at the health post, they are supposed to be referred to bigger hospitals if their illness is serious. But since the health post here is not fully functional, residents are forced to visit big hospitals even for small illnesses,” Rai elaborated. He also added that in lack of immediate medical attention, some patients condition becomes critical by the time they reach bigger hospitals.

“We do not have exact data on this but lack of better birthing services at the health post has affected pregnant women a lot. They don’t’ go for regular health checkups to distant hospitals. This would not have been the case, if our local health post was in operation,” Rai further stated.

The Department of Urban Development and Building Construction (DUDBC) had handed over the contract worth Rs 20.4 million for constructing the health post’s building to a local contractor. According to Rai, the pace of the construction is so slow that it seems that it has come to a halt.

The rural municipality said that it has made multiple attempts to draw the attention of the authorities concerned towards the snail-paced construction of the health post.  “We contacted the concerned authorities several times over the delays in the construction of the health post’s building. But they have not shown seriousness towards it,” Rai said. “When we share our concerns with them, they only reply that they would finish soon,” he said.

Meanwhile, coordinator of the rural municipality’s health department, Ahmad Mansuri said that the DUDBC has not been serious about expediting the construction of the health post despite their multiple requests.

TIKAPUR, May 25: People in the bordering villages of Kailali district have been consuming substandard salt which is smuggled into the... Read More...

GORKHA, March 28: As local-level elections inch closer, political parties have boosted their presence in villages in Gorkha. All the... Read More...