Debutant Bidari spins Nepal to dominant win over Thailand A 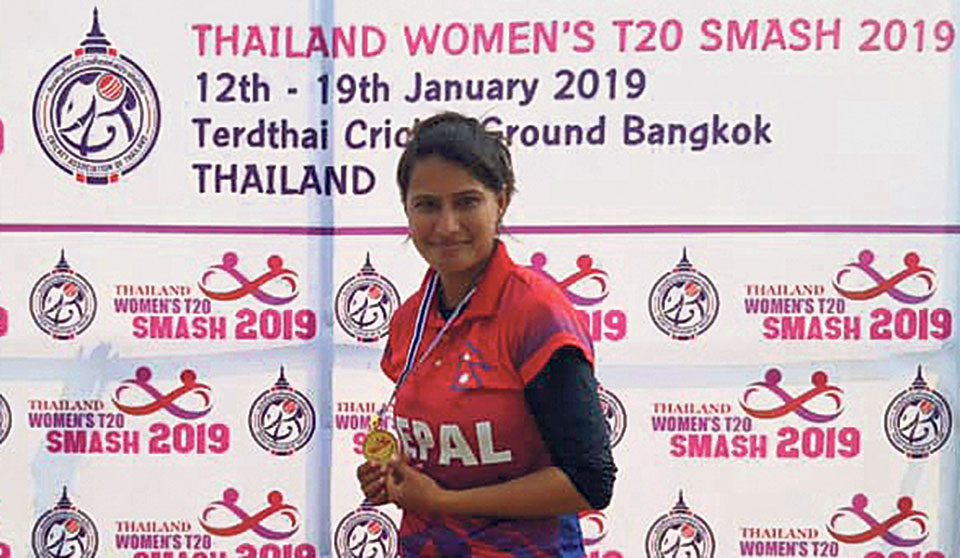 KATHMANDU, Jan 17: Debutant Aarati Bidari registered three-wicket-haul to seal Nepal national women cricket team’s semifinal clash against the second-placed team from Group B defeating Thailand ‘A’ by nine wickets during the last Group A match in the ongoing Thailand T20 Smash at Asia Institute of Technology cricket ground in Bangkok, Thailand, on Wednesday.

Player of the match Bidari helped Nepal dismiss the A team of home nation Thailand for mere 19 runs in 15.4 overs after losing the toss and being invited to bowl first. Six Thai players were dismissed for ducks whereas seven extra runs conceded by Nepal was the highest individual score of the innings. Bidari conceded five runs in her four overs in the match registering a maiden as well. In a dominant display of bowling, Indu Barma and Sarita Magar shared two wickets each whereas skipper Rubina Chhetri and Sonu Khadka chipped with a wicket each to bundle Thailand A out.

Nepal completed the chase in 3.3 overs for the loss of a wicket. Mamta Chaudhary was dismissed for eight runs that scored the only boundary of the match whereas Nery Thapa and Dolly Bhatta stayed unbeaten on five and two runs respectively to seal the win and finish as group winners after the completion of the entire matches in Group A.

Nepal finished on top of the Group A defeating Malaysia, China and the United Arab Emirates earlier in the tournament. The UAE is the other team to qualify for the semis after finishing second in the group points table.

Similarly, Indonesia is on the second spot after winning three and losing one in the Group B table followed by Thailand with superior run-rate and three wins so far with a game in hand. Hong Kong, Myanmar, and Bhutan are the other teams in the group.

Eight teams participated in the T20 tournament hosted by Cricket Association of Thailand.