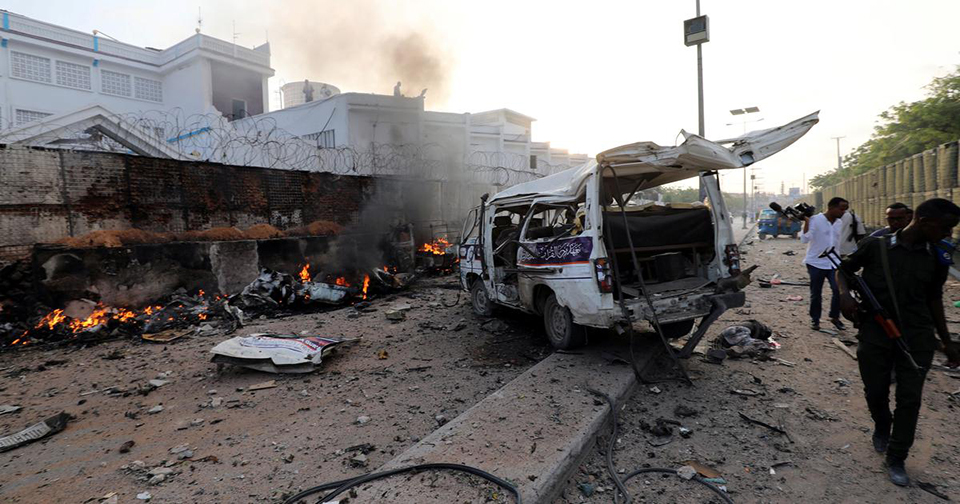 MOGADISHU, July 13: Islamist gunmen killed 26 people, including Kenyans, Americans, a Briton and Tanzanians, when they stormed a hotel in Somalia’s southern port city of Kismayo, a regional state president said on Saturday, the deadliest day in the city since insurgents were driven out in 2012.

A car bomb exploded at the hotel where local elders and lawmakers were having a meeting on Friday night, and then three gunmen stormed in, police said. It took 11 hours before security forces ended the overnight attack, police officer Major Mohamed Abdi told Reuters.

The dead included a presidential candidate for August’s regional elections, Jubbaland state president Ahmed Mohamed Madobe said in a statement. At least two journalists and a U.N. agency staff member were also reported to have been killed.

Regional president Madobe said that three Kenyans, one Briton, two Americans and three Tanzanians were among those killed.

“Among the dead was also a Jubbaland presidential candidate named Shuuriye. Four militants attacked the hotel. One of them was the suicide car bomber, two were shot dead and one was captured alive by Jubbaland security forces,” he said.

He said 56 people were wounded in the attack, including two Chinese citizens.

Police had said earlier all the attackers had been killed.

“We admit, we are heartbroken by their sudden violent deaths. But rest assured, we are also as mad as hell because of it,” he tweeted.

The Somalia office of the U.N.’s International Organization for Migration said on Twitter one of its local staff members, Abdifatah Mohamed, was among those killed.

SADO Somalia, a local non-governmental organization, also said on Twitter its executive director Abdullahi Isse Abdulle had been killed in the attack.

A journalists’ group had confirmed on Friday that two journalists were among the dead; Somali-Canadian journalist Hodan Naleyah, the founder of Integration TV, and Mohamed Sahal Omar, reporter of SBC TV in Kismayo.

Separately, Mohamed Ibrahim Moalimuu, general secretary of the Federation of Somali Journalists, said in a statement: “We are saddened and outraged by this loss of life, and condemn in the strongest possible terms this appalling massacre.”

Al Shabaab was ejected from Mogadishu in 2011 and has since been driven from most of its other strongholds.

It was driven out of Kismayo in 2012 by Kenyan forces supporting a regional militia headed by Mohamed. The city’s port had been a major source of revenue for the group from taxes, charcoal exports and levies on arms and other illegal imports.

Kismayo is the commercial capital of Jubbaland, a region of southern Somalia still partly controlled by al Shabaab.

It is scheduled to have parliamentary elections this month and presidential elections next month. But relations between Somalia’s central government and its federal states have sometimes been rocky amid arguments over power and resources.

JOHANNESBURG, Jan 20: The U.S. military on Saturday said it had carried out its deadliest airstrike in Somalia in months,... Read More...

National Assembly to meet on January 31
37 minutes ago