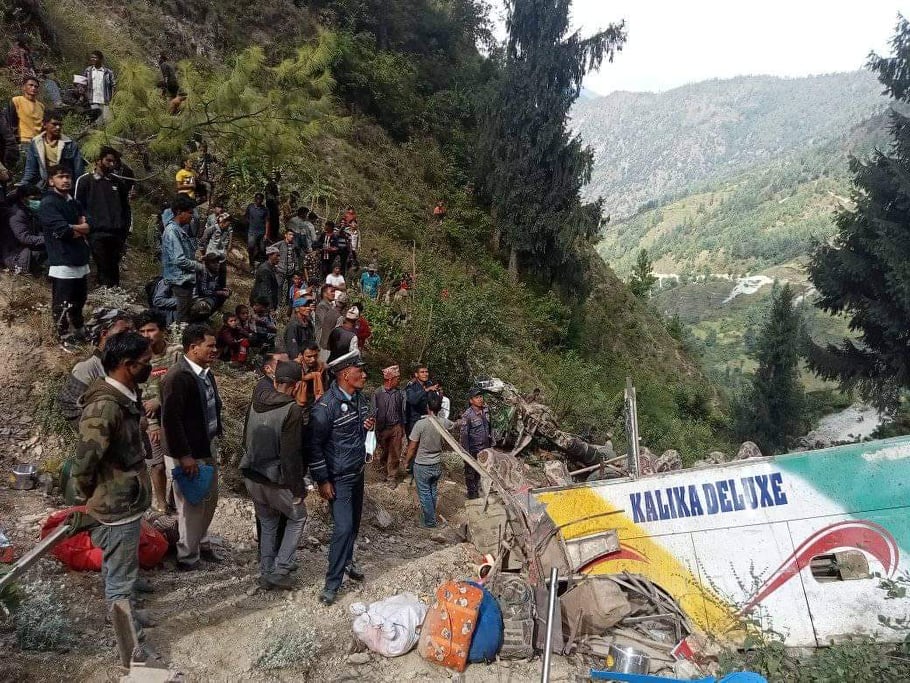 BANKE, Oct 12: The death toll in the Mugu bus accident has climbed to 32 as four more injured airlifted to Nepalgunj breathed their last while undergoing treatment.

According to In-Charge of Nepalgunj Airport Security Guard Sub-Inspector Santosh Shah, 10 persons who received deep injuries on their head were taken to Kohalpur Medical College and five other injured persons were sent to a Nursing Home in Nepalgunj for treatment.

According to Sub-Inspector Shah, three other persons airlifted by army chopper were also sent to Kohalpur Medical College for further treatment.

At least 32 people were killed and 14 critically injured as a passenger bus met with a tragic accident in Pina Gaaun (Saatmod) area of Chhayanath Rara Municipality-7 in Mugu district Tuesday afternoon.

The passenger bus (Bhe 1 Kha 3136) enroute to Gamgadhi-- the district headquarter of Mugu district-- from Nepalgunj met with the accident in Pina Gaaun area at around 12:30 pm, according to Republica correspondent in Surkhet Nagendra Upadhyay.

Foot only the bills of VIPs who can't afford treatment, govt told

KATHMANDU, Sept 15: Following widespread criticisms over the trend of VVIPs and VIPs going to foreign countries for medical treatment on... Read More...