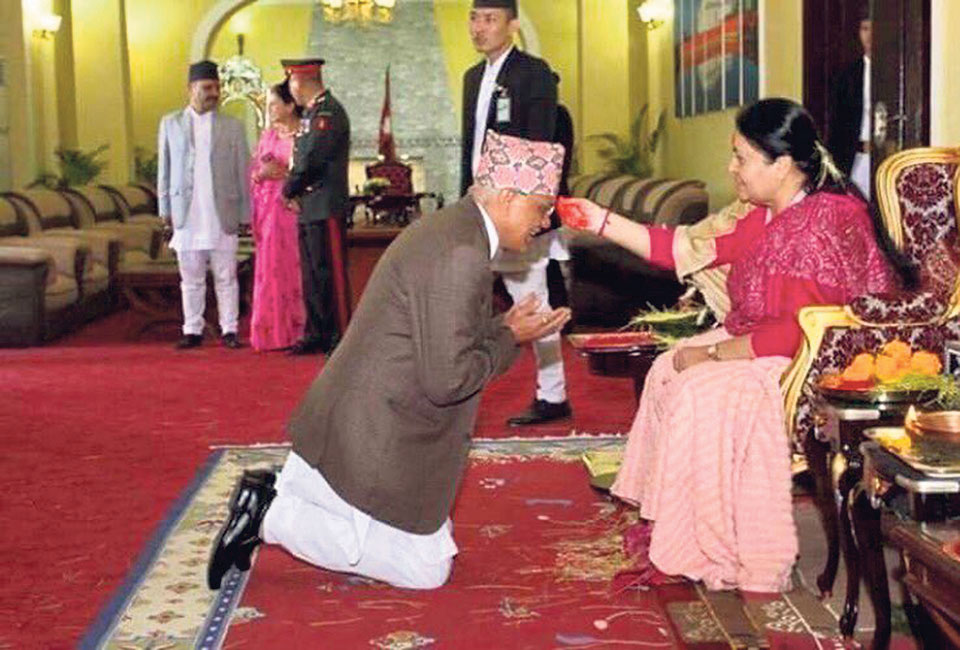 The photo that went viral on social media immediately after the President offered tika at Sheetal Niwas last month.

Dear President, letting go of things you do not like is always a peaceful choice.
But then you did something hurtful. You refused to meet Nirmala Panta’s mother

Dear Madam President,
Three months ago, I was on my way to Ratnapark from Kalanki in a microbus. A middle-aged man was talking to everyone inside. He seemed jolly, but suddenly he looked upset. Other people also turned serious while listening to him. I unplugged my earphone to understand the matter. He was talking ‘Maharani’. He hated the Maharani for her style and attitude. The people  around nodded in agreement. A lady added that VVIP movements have been a nightmare to the common people. “It is happening because people without substance are in power,” the man said.

Maharani syndrome
Madam President, they were talking about none other than you! I know you are not a queen. But there was no point arguing with them. They did not seem willing to give you the benefit of doubt. People have concluded that you have developed ‘Maharani syndrome’, which they hate to the core.

Hatred is contagious. Perhaps, just like love. I instantly felt something bad inside. People’s frustrations have been accumulating over time due to massive discomfort during ‘sawaris’. The passengers elaborated how they were hit by such ‘ill’ practice. That day was Monday. Monday happens to be my weekly fasting day. And when on fast, I try to avoid normal diet, and also distance from worldly and negative thoughts. But I was losing my calm to the atmosphere. I did not like what our president was doing. She was not making people feel good about her conduct as the guardian of the country.

I reached my destination at around 2pm. A media organization had organized a talk program. The invitees included civil society representatives, journalists, and government officials, among others. During the tea break, I joined a group of my friends and former colleagues. We started talking about sawaris of VVIPs. Soon, you became the center of the talk. The list of discontentment was long – “She does not behave humbly”; “She does not act natural”; “She has superiority complex”; “She hesitates to shake hands with the Nepali people”; “She declines interview requests”; “She is hopeless”; She is not a role model at all”; “She is in the sky now”; “Once she is done being president, she will be shocked”.

Some friends knew even the ‘inside story’ and they revealed more ‘evil’ about you. “Despite being a ceremonial president, you have not stopped exercising power in the party.”“Your favor determines luck of party cadres, members and top leaders of Nepal Communist Party and the Prime Minister do not oppose to your decision.” And so on.

A journalist reported that you telephoned Prime Minister KP Oli to ‘warn’ him that he should consider the Defense Minister Ishwor Pokharel for Deputy Prime Minister at a time when Upendra Yadav was bargaining for the post. Other cases of how your favor decides the fate of senior party members were also cited. Your interest in micro-management of the party despite being the head of nation came to the fore. It is indeed a serious matter and should be condemned. The people who were talking all this were genuine, and I had no room to doubt that they were biased while reading you. My Monday was spoilt. I freely took part in the criticism.

I must confess that I do not know much about you. One thing I know is that you love saris. But not the ordinary ones. You reportedly prefer expensive, imported sets. When the only thing you know about your president is that she loves to wear branded saris, and when you also know that your country is very poor and that people are deprived of basic needs, you are disturbed.

Learn from Kolinda
What other inclinations you have, we don’t know. You talk less, at least in public. Talking less is considered good, if one is wise and selective in words. Your education, expertise, interests or skills haven’t been reported much. You do not seem to have a great love for sports, unlike Croatia’s President Kolinda Grabar–Kitahas. When images of her hugging the country’s footballers went viral after they lost the 2018 World Cup final, she grabbed global attention.  I would say she is a shining example of a good leader. I somehow started liking her though she is not my president.

Another president who resides in my heart is former president of India, Abdul J. Kalam. This great scientist inspired a generation of young people and lived what he preached.

Secret comparison inside my head bothered me, but I was not in a mood to express it. Letting go of things you do not like is always a peaceful choice.  But then you did something hurtful. You refused to meet Nirmala’s mother. Her child was raped and murdered. Whether you call it an overtly politicized case, the mother’s tears were genuine and she wanted to share her pain with you. She thought a mother can understand another mother. If you had given five minutes of your time, your words would have meant much to her. And this image would have been a powerful bridge between people and the government. In this particular case, the government has not been able to take the people in confidence, despite consistent efforts to find the culprit. As the head of the country, you could have at least assured the family of justice. You missed the opportunity.

Finally, you tested my patience during Dashain. The images of you putting Tika to the people boiled my blood. I forgot about my fast and my chosen routine of not accommodating fury in mind. I was in office and others’ reaction was the same. Nobody felt comfortable to see the former chief justice, police chief and others receiving Tika kneeling down in front of you. You were sitting at ease on a decorated chair, wearing a smile. You sat quietly like a dummy. When you do this, doesn’t your own political journey, ideology, the past mock you?

Not any life on earth is everlasting. We all are mere travelers in this universe. We play different roles and say goodbye to the world one day. What we leave behind is our work. If you want to be taken and remembered as an arrogant and extravagant president, go on. But if you want to live in the people’s heart, then prove your worth by your deeds.